Mr Philip Bloom of Richmond has done a revealing comparison shot of the Canon C300 versus Panasonic GH2 with hack and Driftwood’s high bitrate patch. You can watch the test above but I recommend downloading the file (as a Vimeo Plus member) and watching it on TV for best quality.

Here is a montage I’ve assembled from the 1080p footage downloaded from Vimeo. As you can see the GH2 really is insane for resolution and the cleanness with which it downscales that 18MP CMOS to 1080p. The codec shows very little sign of AVCHD compression, well on par with the C300’s codec. Both are 8bit but really 10bit is only useful if you’re doing heavy keying work and VFX.

Please click the image to enlarge to best pixel peep it! 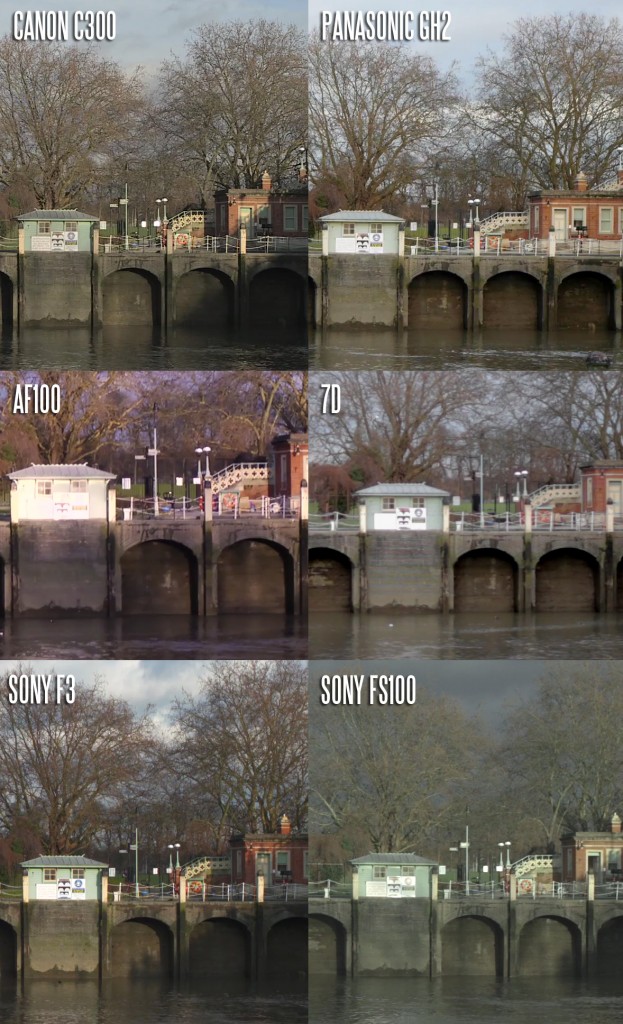 In my opinion it goes from best to worst:

Although that is not the full story. For example I prefer gradation, tonality, colour and shadow areas in my 5D Mark II footage to the GH2. Stuff shot on the 5D looks great on a plasma TV. As anyone who has plugged in both the 5D and GH1 into a plasma will remember, the GH2 can still look a bit grey and digital in comparison sometimes like its older sister. The 5D has a very organic look. The 7D is better for certain shots than the AF100 as well. They’re nice cameras, but not for wide establishing shots of finely detailed landscape and architecture like above. The C300 will be better in low light because it has 8MP on a Super 35mm sized (roughly APS-C) sensor and the GH2 unfortunately has 18MP for stills on a 1.86x crop 16:9 sensor a bit smaller than Super 35mm.

There is however no denying it that the GH2 really does stomp all over other cameras when it comes to resolution and low moire / aliasing. Especially with the hack the codec is now utterly incredible and insane for what the price of the camera and the fact that the hack is free!

It is very revealing just how much better the GH2 looks than the ‘pro version’ AF100 (which is really a GH1 in a lunch box) and I’d say it is slightly ahead of the Sony F3 as well for resolution.

The Panasonic GH2 costs £599 which just boggles the mind for how much value a company is able to give you when they feel like it. (Although it took a Russian hacker to force their hand!!)

I understand why the C300 is expensive – there is actually no universal sense of what is a high price and what is a low one. Price is relative to what an industry feels is high or low. Clearly the video industry broadly thinks that $20,000 is OK. What does frustrate me is that a pro photography camera is priced at £2-3k and yet pro video cameras are still WAY more.

If you have a talent for cinematography the DSLRs are such a gift because most wouldn’t be able to execute on their talent if they had to stump up $20,000 for a camera that does the business. We should NEVER lose sight of this. Imagine if the 5D Mark II cost $20,000  – pro stills shooters would be up in arms! I knew I could never really execute my talent to the full on a Mini DV cam at university back in 2005 and it was so frustrating to be denied access to better images.

A videographer and filmmaker’s trade can be extremely complex and their day rates are higher than a photographer’s to compensate, so they can afford to invest more in their all important tools. But this doesn’t work if you are an everyman. What EOSHD is all about is unlocking the talent of those 1% of a 1 million people. That is what I feel is so exciting about tools for the masses. Tools for the industry don’t turn me on. Really in industry you get the same 1% of people who are REALLY special and the rest are just tradesmen or craftsmen. But there are far fewer people who use $20,000 cameras so the 1% who are special probably number less than 1000 when in the broader world at large you have a much larger pool of talent to ignite.

This isn’t me being down on the industry it is just a personal interest of mine. It is partly inspired by my days using Macs and PCs as I was growing up, that kind of accessible technology was (and still is) an enabler of great things. And although it is a cliche I can’t let this point pass without mentioning Steve Jobs whose aim in life was to make computers accessible for the many. He achieved this and the affect on society is wonderful. That is what I relate to. IBM’s aim in life was to sell workstations to the few at massive margins and it is similar to what Canon and Sony do with their C300 and F3.

With the C300 you get built in ND filters, a better sensor which is extremely good in low light, and a very nice robust body with an interesting new style of form factor far better (in my view) than the traditionally shaped Sony F3. Of course you get more features in firmware out of the box, a better HD output for monitoring, minimised rolling shutter, bigger battery and more robust XLR jacks for external mics. But I reckon in 2012 cameras like the GH3, 1DX and 5D3 will be well on par image quality wise in almost every department even low light so this is great news for the 1% of a million.

Now companies love ‘added value’. Zeiss do it by giving us Compact Primes. Special pro lenses that perform superbly, don’t breathe (my Samyang 35mm F1.4 may be sharp but it turns into a zoom lens at F5.6 on the 5D Mark II!!) and cost an arm and a leg. Lens technology was mastered as early as the 1970s and really what we have seen since is just refinement. A modern Canon L lens is not 20x better than a 70’s L lens in FD mount. The price of a set of Compact Primes meanwhile is fine if you are renting but I like to own my gear so I can travel and shoot when I feel like it.

For camera companies added value like this (mark up in ordinary language) is done partly by adding creative features to high end cameras and partly by disabling ones in lower end cameras by software switches and putting their best performing chips (sensors, image processors) in the high end tools. Such refinement and added value is sold at such a premium because the market dictates that the best performing tools are worth more – a lot more – than the less refined & more common stuff.

The company’s design targets for a product matter as well.

I distinctly remember the posters at Photokina 2010 for the GH2 saying ‘stills, video, no compromises’ and with the Canon 5D Mark II it was more a case of ‘ultimate stills, full frame….Oh and a bonus video feature’. It is also true that when the 5D Mk II was being specced out by Canon the year was 2007-2008 and adding better video would have meant a big increase in price which most stills people would have found impossible to stomach (many don’t like having video for free as it is!). Now video is cheaper to implement because CPUs (and memory chips) are fast and heat / power efficient compared to what they were like 4 years ago, as well as being much cheaper to produce.

The C300 is sold in limited quantities to industry professionals who love to use what it offers above a DSLR and it has a high level of refinement and a highly targeted feature set. The GH2 is sold in large quantities to mass market consumers in a fiercely competitive arms race of technology against other industry players, with a simplified feature-set that appeals to casual shooters.

And due to the wonderful world of semiconductors their images are similar in most situations.

This is how I think the industry works and it is similar in every industry. What is physically inside the box doesn’t always dictate the value. There’s far less difference than people think between high end gear and low end when you look at the internals. Take a £200 set of headphones vs £1000 for example and all you get is a very high level of refinement in the higher end set. Fundamentally the parts are similar. It is the same with cameras.