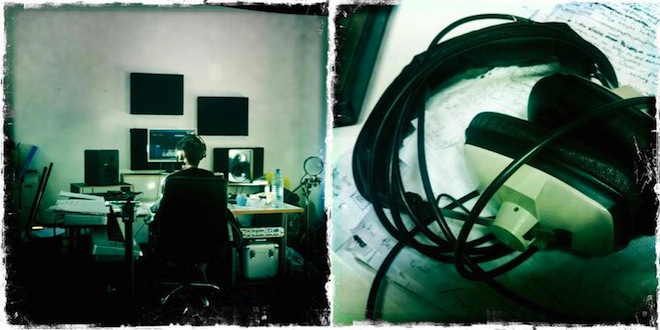 Andrew Pegram is my friend here in Berlin, an audio producer, musician and recording artist. He’s currently working on a album of electronic music and likes to put the life back into ‘perfect’ digital audio.

After shooting my short GH2 film Patsy last week in London, he began work on post-processing the ambient soundtrack captured with ‘shock horror’ the onboard GH2 mic.

We wanted the opposite of slick TV drama. Gritty realism. If a train passed 200m away, we wanted that on the sound track. Since the film was to have no dialogue, the ambient sound was key to the atmosphere of the film – a raw documentary feel.

We took a certain approach to this which we were uncompromising with and it has caused a fair bit of controversy amongst some consumers who don’t understand how low-fi production can work with putting feeling and life into a sound track.

We didn’t want a pretty piano lead sound track and this isn’t eye candy. We didn’t want tons of carefully scripted audio and dialogue or obvious ad-style edits and close-ups. If the film is too obvious, nobody thinks twice about it after watching.

We had a shotgun mic sound track which simply wasn’t used because it took the life right out, it was just too perfect, too quiet, it had none of the nuisances and ambience of the GH2’s onboard stereo mic, with the gain turned up. If it meant the odd knock on the rig being picked up occasionally, then so be it. Some have said that wind noise and the rough and ready nature of the sound track made it seem amateurish and underworked, this is a subjective thing – to me, it just fits. I’ll let Andy explain the details…

Often audio is an afterthought. Many filmakers either capture adequate audio and possibly consider average levels, pan and maybe a little EQ or decied to simply throw it away and use a soundtrack instead.

Following the brief for ‘Patsy’ I firstly resisted the urge to clean, edit and polish the audio captured from the camera. In keeping with the ‘lo-fi’ quality of filming and cinematography I wanted to be careful not to process the life out of the audio. What we ended up with was raw audio that sounded controlled, even and wide, not polished audio that sounded lifeless and removed from the footage.

The audio captured was delivered as a stereo uncompressed WAV at 48kHz 16bit. After level and frequency analysis in realtime it was clear that, as with many location recordings, there was a large dynamic range from soft subtle dialogue at -60dB to close miced slamming doors and the London Underground peaking well above 0dB.

First task was to hard limit the audio to deal with general peaks and to decrease the difference between loud and quiet. I run the audio through a Waves API 250 emulation compressor and set it to hard limit at +6 dB. This allowed the audio to breath whilst still catching peaks and with a make-up gain of around +4.2dB i brought the lower level information forward. This allowed subtle clothes movement, squeeking beds, breathing and soft footsteps on carpet to be audible without increasing hiss and mess.

Whilst a huge amount of wind was picked up by the mic in the outside shots I wasn’t interested in overdubbing, or using the shotgun mic recordings on shoot. The use of wind, hiss and noise is subjective but the stereotype would be that they are problems to be eradicated. After working with the clean directional mono audio it was clear that the small nuisances, ambience and real life errors were effective and desirable in bringing everything down to earth. Wind noise was one of these subjective choices, it was minimal and controllable. I automated an API emulated 560 multi band EQ to cut out the bassyness that wind can often cause with unprotected microphones. Individual level changes were made in realtime to work with the aggressiveness of the wind to create something more even and controlled. Remember that your microphones are moving diaphragms reacting to air pressure. Wind is simply a huge movement of air that the microphone lovingly reproduces as that underwater muddy fuzz. It occurs naturally with our hearing too, as well as with recorded audio.

With the EQ, I swept the main wide notch across the low mids until the boomyness was reduced, making sure I didnt thin out the audio too much. I then inserted a master SSL EQ across the track and removed everything below 60Hz. The in-built camera mics often have a healthy frequency range right down to sub bass frequencies and can pick up stray sub and muddy mess at the low end. This isn’t needed, and can be removed with a hi pass shelf EQ such as the SSL.

Finally I treated the peak information individually by riding the level fader and drawing in automation events to tame harsh peak levels such as slamming doors, water splashes and light swtiches. Under limiting and light compression these changes, as long as above -6dB, are not noticeable and simply control your average level to make sure you don’t peak. If you peak then you distort your audio. If your audio distorts you may not notice through laptop speakers, but on a full range system it will sound dirty and crackly and have a real negatve impact on your project.

Final task was to overdub the sound of a car horn from a visitor outside. I kept in mind that the main actors were situated in a room down a corridor, a fair distance from the outside, where the car was parked. I happened to stumble across an excellent recording of a BMW horn, which ironically fit the desciption of the car used in the shoot. After importing to a new mono track, arranging and crossfading the horn samples to create a natural aggressive pattern, I thought about it’s placement in the stereo field.

The room, the corridoor and main door would naturally reduce the high frequencies of any audio source from outside. I applied a broad notch using a WaveS REQ unit to decrease these frequencies from about 900Hz upward. The immediate result is that ‘neighbours party next door’ effect. I set the level fader back around -10dB to create distance, and finally I added a soft reverb to give the impression of further distance. This reverb is full stereo in nature, and of course would sound unnatural to two people within a closed room. I used a stereo imager to reduce the stereo field and set the FX return pan to match that of the positioning of the sample itself.

The choice to marry the documentary low-fi feel of the footage with corresponding audio is an obvious one, but without the processing described above it would have been under-controlled, boomy and distracting. As it is I see the audio simply sitting back and letting the story breathe which is one of the many great modest qualities of audio for film.