Last weekend I met the man himself Philip Bloom with which it all began and whom was first to shoot really exciting footage with a DSLR and get the word out. Without his contribution to the DSLR video scene since, would EOSHD.com have existed or been the same? In London I found that the meet up was incredibly enjoyable – great to get to meet lots of like minded people and it was thoroughly good fun. I was also to meet another GH1 shooter – the only one there! If you read this, show me your footage on Vimeo or similar. Would like to see it. I also met a writer-director who appears to have a huge talent. I am very excited at the prospect of being his DP.

I found everyone I met very interesting, and a guy who knew a Panavision employee was also in attendance and we had a very long tech-chat about RED and lenses. I found that central London was much safer than in the past and much more camera friendly. Aside from that it is just such a damned cinematic place to shoot that I went down as early as Thursday and only left on Monday night.

But since much of the weekend was spent talking I actually didn’t shoot as much as I intended! Plus I found that at the meet itself, the social side and creative side of my mind simply do not seem to want to activate at the same time. So I have very little of it recorded on camera!! I really could not quite believe it when afterwards I’d realised I’d come away with about 4 iPhone snaps and 5 or 6 video clips. It was great to meet Philip and many of my readers though, which more than enough compensates. Photographer TJ Jeffery took some great shots and very kindly shared them with all of us riff-raff, some of which you see here (photos that is!!).

From Thursday to Monday afternoon I shot on 1 battery till the kill, over 2 days. The GH1 is without doubt the most energy efficient live view video DSLR around – and that was with the LCD screen constantly engaged even when not recording something. The video you see is shot entirely on that 1 battery. I had new sticks for the weekend which I picked up at a wholesaler near Soho, London – a Benro A-168M8. This is the smallest folding, steadiest and most light weight non-expensive-non-carbon tripod around. It also has a good ball socket head, although I would also get a fluid video head with it too. I’ve gone for the Giottos MH5001 because I like the 2 axis tilt heads, but the jury is out on this. It’s very cheap – around £36 but the handles have a horrible cheap look and the head is very heavy, so I travelled light and stuck with the included Benro ball head.

There was a LOT of Canon gear at the meet, and I’d like to see some healthier competition in the future from Panasonic, Nikon and Sony. But people ought really to recognise more the fact that there are affordable alternatives to the 7D & 5D, great though the Canon cameras are I don’t believe they are the best for everyone. The GH1 is one hell of a creative bag of tricks. If the GH1 had been hack-enabled from the start of it’s life I would have no doubt that it’s appeal would be more broadly recognised. Put simply, the high bit rate looks so smooth and free from artefacts like moire on the GH1 I could lick it. But Panasonic made a huge mistake in their target audience. The GH1 was not a great seller, I’d say many of whom bought it were enthusiasts and 90% of them ended up wanting the features of the hack. Now they (Panasonic) might understand the rapidly changing consumer DSLR video market better I expect the forthcoming GH2 to be more to our needs and to give Canon something to think about.

Aside from my Lumix obsession (which Philip mercilessly took the piss out of!!), I would gladly buy a Canon DSLR if only their video mode was actually moved up a gear from what we had on the 5D over 2 years ago… I have not lost interest in EOS, as the site name suggests – it’s just that the wait for something truly exciting and non-traditional, 5D firmware update aside, has been very long. But I state again – 7D and 550D – fantastic choices. I am all for it, just I like the GH1 on a personal basis more. 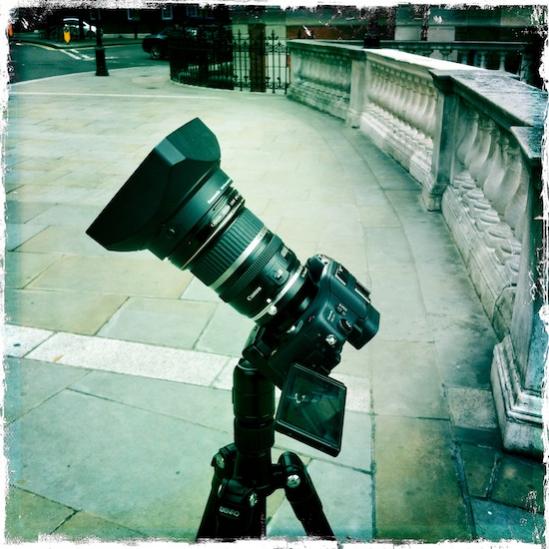 I had also brought with me my Panasonic LA7200 anamorphic.

I spoke to Philip about his experiences with the LA7200. He never really found it worked for him, but then I also found that the thing is just plain awful on the 5D Mark II or on a fast lens. This is perhaps one of those rare occasions where a smaller sensor is actually a benefit, because it’s less demanding on glass. The LA7200 was designed for the tiny-chip DVX100 Mini DV camcorder so it’s only designed to cover a small central area of a lens. On DSLR lenses you need the right lens and camera, and the sweet spot is very narrow. I rarely use it on anything other than the Canon 10-22mm EFS wide angle at F4, 13mm-22mm. No good for faster or longer lenses. 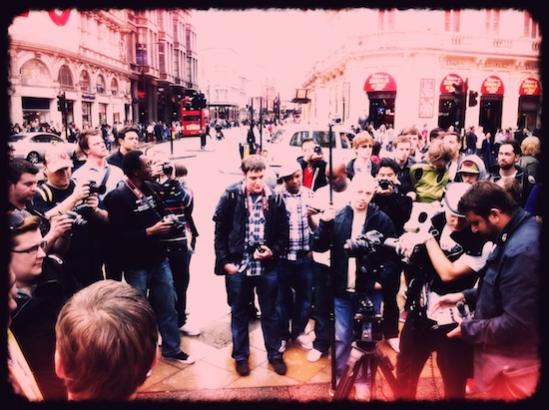 I did however find it worked very nicely attached to that very lens on another shooter’s Canon 7D. He was getting some very nice stuff with it at the meet, so maybe a APS-C sized sensor is it’s limit. If I remember correctly he was at around 17-18mm without vignetting. This kinda makes sense because in actual fact the GH1’s sensor is in fact bigger than standard Micro 4/3rds chips, being native 16:9. So I’d recommend the LA7200 for the 7D and 550D too. 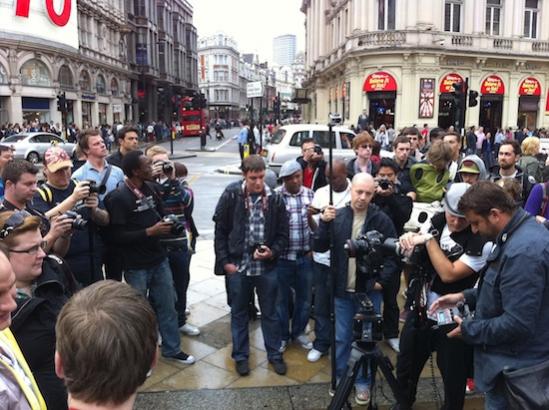 I love it for it’s cinematic optical expansion of the frame and the unique horizontal anamorphic lens flares, a particular LA7200 strong point.

You can discover more about this fantastic lens via the previous LA7200 anamorphic series on EOSHD.

A lot of great work came out of the weekend from the talent assembled at the meet. Two videos stood out for me, both stand-outs in creative terms and I liked the choice of music – always very important. 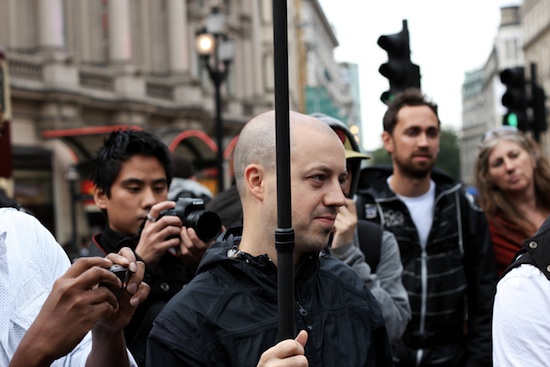 Journey to London – shot on a crane with tiny GoPro HD by Filippo Chiesa
[url]http://www.vimeo.com/14194844
Favourite moment – insane 3rd person view of the man himself in front of the crane

Kessler Crane SmartLapse by Philip Bloom
[url]http://www.vimeo.com/14159095
Favourite moment – the sublimely judged transition between daytime and night timed with change in the music

Great work guys, and others too numerous to mention! I’ve watched them all and really enjoyed what I saw.

After the meet-up, myself and writer-director Anil Rao, and around 6 other old droogs went off into China Town for a meal which I really enjoyed.

Again though, the social side of my brain clashed with the journalistic side and I have absolutely no recollection of all the interesting stuff people talked about or any of the old in-out that occured. Although I do remember that Philip was particularly angst about forum trolls and wanted to find a pub to drown his sorrows in, but then happily discovered how to multitask on his iPhone. He is an addict!

*Yeah you can let the voice over drop now*

So all in all, my feelings from the weekend is that real world contact is still the main bread & butter for filmmakers. The internet is a great tool to build contacts, nothing beats actually meeting people and talking face to face to people – the real would carries a much greater significance than a simple email, tweet or blog.

I’ll be at Photokina 2010 in Bonn, Germany and will put a more personal stamp on my site with a small revamp later this month, so do say hello if you are at the show on the first 2 days (Tues & Weds). 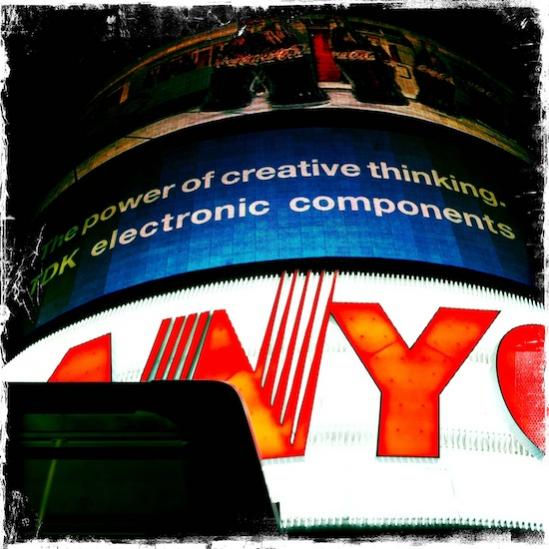