Is the GH4 a match for full frame in low light? The answer, surprisingly, is yes…

The bad news is 4K is about to turn all your 1080p cameras (both expensive and not so expensive) into mushy toys.

The good news is… your upgrade is cheap!

Sony rumours are swirling around at NAB and I’ll be covering the show live on EOSHD and have some eyes at the show too. I am not there in person because of the need to knuckle down in Berlin with Frank Sauer and shoot our Spreepark send off with the GH4 along with another music video project which I am super excited for. However I will be at Photokina in September and will do an EOSHD meet up there.

The GH4 has taken a huge step forward in low light performance over the GH3, but is it a match for a full frame sensor? For stills I would say no. For video, I would say yes and then have to sit down for a bit to take in the surprise. This is yet another unexpected benefit of 4K, like grading. When you scale the 4K to 1080p that dramatically reduces noise by 4x and makes it finer. Also if you apply noise reduction to the original 4K and then go to 1080p it looks even better because the extra detail of 4K compensates for the amount of detail smudged out by the noise reduction.

Viewed at 1:1 in 4K the noise grain at ISO 6400 is actually not that nice – is not fine film-like grain like the 5D Mark III raw at 1:1. It is quite splotchy. So obviously if you are going to project a huge cinema screen sized 4K image from the GH4 I’d stick to ISO 1600 max. 800 is clean. For 2K and 1080p however, ISO 1600 is clean and even ISO 6400 is usable provided your shot isn’t under exposed. You can see on the test that the reasonably well lit car bonnets are clean even at ISO 6400 on the GH4 but the sky has taken a bit of a battering. 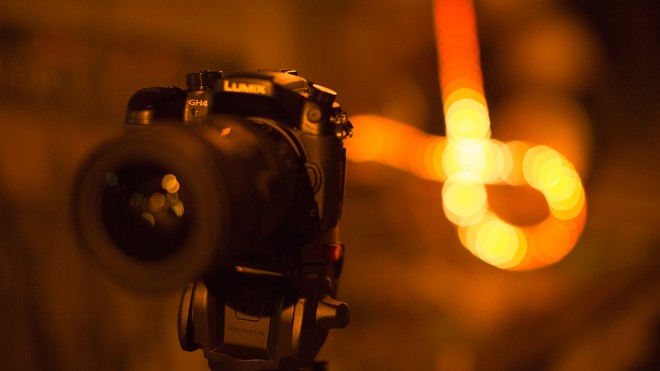 The other surprising thing is with the workflow for low light. Exporting to ProRes 422 HQ hurts the GH4 grain texture at 1080p and even introduces banding. Exporting to H.264 at 50Mbit and rendering at maximum quality & bit depth solves the banding and maintains a much finer grain, yet at 1/4th the bitrate. Strange stuff.

Obviously if you watch the clip on Vimeo the grain will be smoothed out by the heavy compression but download the clip and that should not be the case.

You can see from the video how close it is to the 5D Mark III and in some areas of the frame it is even cleaner, certainly more detailed.

The GH4 production diary ends tomorrow with Part 5. This will cover slow-mo at 96fps along with everything else I have missed in the previous articles. Then my focus shifts to NAB and shooting with the GH4 proper at the Spreepark.

Hope you have all enjoyed the GH4 coverage so far. What a great start to the 4K era!!