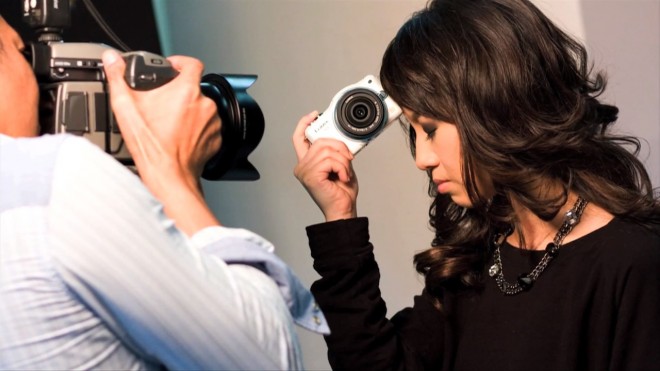 Above: “If only I hadn’t had bought that GF2 last week”

The video itself that the above frame (click it to enlarge) was taken from is awful so I will spare you it – a slideshow of a pop-star photo-shoot, it does however show off the new Panasonic GF3 in all it’s glory on YouTube. What do we know so far?

43rumors reports that the GF3 will be released on June 13th. It has the same sensor as the G3, so a big improvement on the GF2. That was based on the mummified G1 sensor and it doesn’t stand up today.

The G3 which the GF3 is based on does pretty good video although it’s not yet clear what has been turned on or off in firmware. Expect the GF3 to be similar – that means almost GH2 standard minus native 24p. The sensor does 30p and 25p (not 60p like the GH2’s) but stores it in an interlaced format.

Sadly the GF3 is not a nod to the more descerning photographer that the GF1 played so well to. Again they have targeted the mass market and compact ‘step-up’ consumers. They have got rid of the controls and put them on a touch-screen. I wouldn’t mind if it was of iPhone standard but all camera touch screens seem like they’ve been designed by a generic Chinese MP3 manufacturer. Awful responsiveness and graphics from 1995.

Touch screens CAN work on DSLRs but not as they currently are implemented. They’re just crap. Let’s see if Panasonic have taken a hint from Apple after these past 3 years or if they are still mimicking Chinese software design.

The GF3 has been cut away at the edges yet more, meaning the grip is smaller. It also has a bulge to accommodate the lens mount. I expect with the removal of physical buttons the touch-screen dominates the back.

Where do you put your hands? I don’t mind the design, I think it looks good but that niche of photographers with hands will struggle for grip.

I think mirrorless needs to go a bit more up-market. There are rumours of a Panasonic L1 replacement style rangefinder to compete against the X100 and surely the success of the Fuji sales will spur Panasonic into action.

We can only speculate.

Likewise the Canon mirrorless EIS system. That’s something Canon need to do soon because mirrorless is eating into both compact AND low to mid-range DSLR sales. Likewise Nikon, who have patents filed for mirrorless mounts with the release button on the lens itself.

The problem with mirrorless is that in America sales have been poor and so Canon and Nikon are content to drag their heels. In America bigger equates to better for most consumers and they see mirrorless as underpowered and girly. In Japan and Europe mirrorless has been well received for what it is… a more future facing, more nimble yet large sensor format with much better lens possibilities than a DSLR.

Without mirrorless none of the LOMO anamorphic, cheap Russian cinema lenses, easily adapted PL mount lenses and c-mount cine lenses, or the F0.95 Nokton would have been possible. One day I’d love to put such optics on a Canon… One day.

Until then it’s either GH2 or bust as far as mirrorless goes for filmmakers.