Who takes the lead in the sensor race? Surprisingly, Canon is beaten to second place and Nikon now has the best APS-C sensor in terms of high ISO noise. But not by much.

Panasonic meanwhile have made a good stride forward. Although, like the GH1, when pushed too far it falls away quicker than it’s competitors, the GH2 is nip and tuck with the 60D and D7000 even at ISO 3200. It falls off the shelf at ISO 6400, whereas previously ISO 1600 was iffy and 3200 was a write off. That’s despite an increase in 4 megapixels on a sensor significantly smaller than both Canon’s and Nikon’s.

Corrected for pixel pitch I believe Panasonic would in fact take the lead.

I’ll be getting a Canon 60D shortly thanks to a very generous Philip Bloom intercepting my Japanese Amazon package on his travels. I’ll pit it against the GH2 and GH1 in the coming weeks here in Berlin. In terms of video noise, it’s clear the 3 are equally matched and noise reduction can make or break a video mode. Done well, like it was on the Nikon D3S and you can get a reasonable picture even from noisy super-high ISOs. But first let’s gauge just the sensor courtesy of DPReview.com (their test not mine): 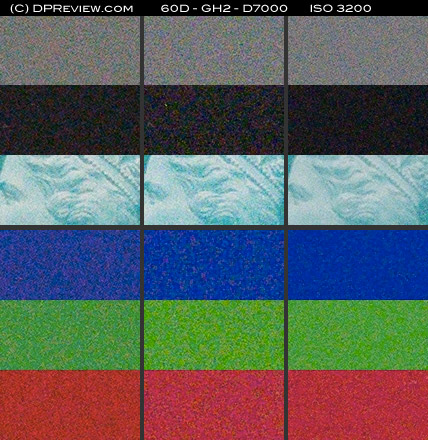 ISO 3200. The Nikon D7000 has an edge on Canon, although they really are nip and tuck – even more so than the test suggests. The Nikon only has 16MP whilst Canon have crammed 18MP onto their sensor. All things being equal I believe the slim Nikon advantage would disappear and in video mode, since the image on the Canon is scaled from 18MP the noise will be of a finer pitch. Amazing performance from the GH2 which has 18MP on a smaller Micro 4/3rds sensor, although within the 4/3rds and 16:9 frame sizes themselves are only 16MP, it’s still an impressive result. 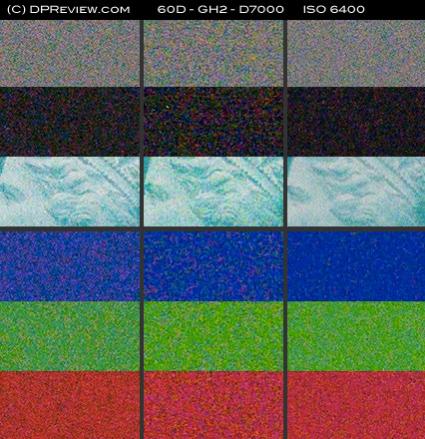 ISO 6400. At this level the Panasonic GH2 has blotchier larger grain noise and falls off the cliff relatively speaking against the Nikon which is hardly surprising. Again though the Canon is loosing out to Nikon. If only APS-C DSLRs had been capped at 12MP, we’d be seeing D3S rivalling high ISO at this stage of the tech race. These are consumer cameras and it benefits the manufacturers in two ways to put higher megapixel counts on the sensors – first it puts some clear water between the higher end D3S and much cheaper D7000 in terms of noise, secondly it drums up sales from the mass market because less knowledgable consumers equate higher specs with better image quality – silly them!

So to the other side of the coin, which video DSLR has the best noise reduction routine? Remember that although DPReview.com only test JPEG + RAW mode not video frames, approximately the same software will be at work in video mode with noise reduction enabled. 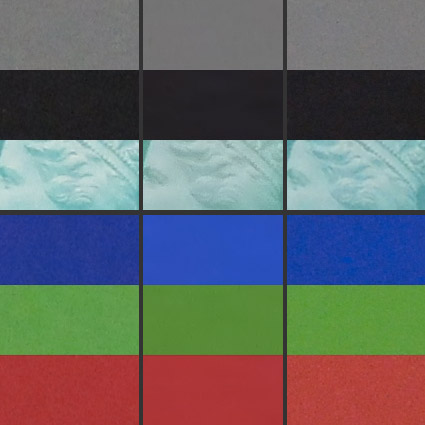 At ISO 3200 with strong NR enabled on each camera, the GH2 really does go to war on noise but it leaves a bit to be desired when it comes to colour and contrast. 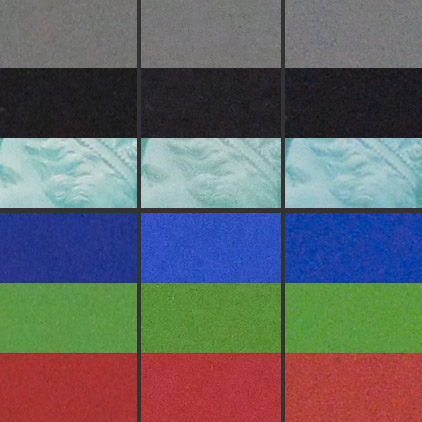 But with noise reduction set to medium (default) on each camera at ISO 3200, the GH2 really does throttle back and takes the lead with the finest and most film like grain, salvaging the most detail.

My only complaint with the GH2’s noise reduction is that it leaves certain colours, the blue channel especially lacking in saturation – they look a little too pale, bright and washed out.

What does it mean?

Overall however the 60D wins the sensor contest. Why? Although the sensor is slightly noisier than it’s rival in the Nikon, it’s definitely resolving more detail.

Unfortunately in video mode the picture is a little different for Canon and the GH2 wins. Going purely off what I’ve seen from compressed uploads to Vimeo, the GH2 has most resolution and detail, and the D7000 has a slightly sharper video image than the 60D which is in third place.

Should I go and buy a DSLR today, just one body – I’d go for the GH2. It’s the best all-rounder and in video mode the better image processing and codec make up for the slightly jammed packed sensor. At anything less than ISO 800 it’s going to beat the pair. The Nikon is great but the non-articulated screen kills it for me. And for that reason, if you can’t decide between the 7D, 550D and 60D for video let me make your mind up for you – it’s the 60D all the way.

I also hear Canon tweaked the video processing and codec in the 60D which puts it slightly ahead of the 550D and 7D.

Nothing beats real world hands on experience and I’m really looking forward to running the 60D and GH2 head to head in the coming weeks. It’ll be a close run thing but the GH2 has the more compelling feature set for video, smaller size and better video resolution if slightly behind in terms of noise at ISO 3200 and above versus the 60D. It also has a slightly smaller sensor and less dynamic range. But again, it being mirrorless leads to many more compatible lenses. If dynamic range was significantly worse than the 60D it’d be a different story, but it’s a close run thing.