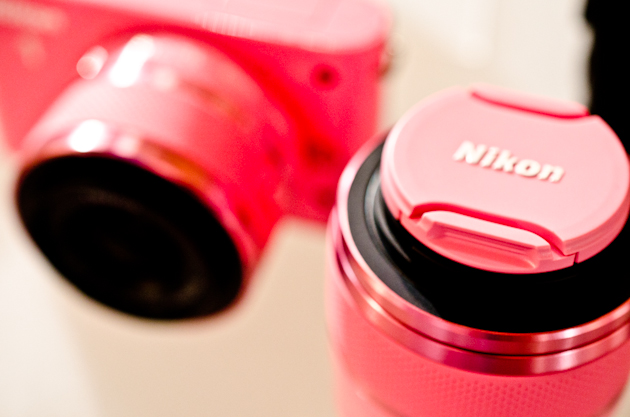 In a soundbite session with Amateur Photographer today Ken Kusakari, product planning manager at Nikon UK has said the company ‘does not fear a Canon mirrorless’. Of course it would be foolish for Nikon to admit that other manufacturers have better prospects… Not least because it is true.

At the moment Sony’s mirrorless cameras are just plain better specified – and cheaper – yet for all practical intents and purposes just as small. Nikon’s mirrorless V1 costs £850 with the standard kit lens.

Panasonic have larger range of lenses and every single one the lenses are better specified than Nikon’s CX range.

Olympus have better built bodies and again are part of the Micro Four Thirds stable. As for a fashion camera, Olympus have that base covered off too. Which looks more stylish?

Above: Nikon J1 (left) and Olympus E-PM1 – Photo by ePhotoMagazine

Hipsters would have to be truly blind to choose the Nikon, and they are the same price.

Let’s look at some of the V1’s rivals. The V1 is the higher end of the two Nikon 1 series cameras. Rival number 1 for enthusiasts – The Fuji X100. It is unique on the market. It has a cutting edge hybrid EVF optical viewfinder is far more stylish, feels better to use and takes better pictures. But before someone point out that the V1 and X100 are aimed at totally different markets – remember that the X100 is only £50 more than the Nikon V1. That doesn’t look like a different market to me.

The Sony NEX C3 is as small and as cheap as the Nikon J1 yet has a sensor 3 times larger. The Canon S100 compact has image quality on par with the Nikon J1 but with a faster zoom lens at the wide end by 2 stops for £200 less, and you can pocket it.

Speaking of pricing there’s a massive £350 price gap between the price of the mainstream Nikon J1 and enthusiast V1 despite them being essentially the same cameras but for a built in flash – which is replaced with an accessory port on the V1, mercifully, have you seen the build of it? 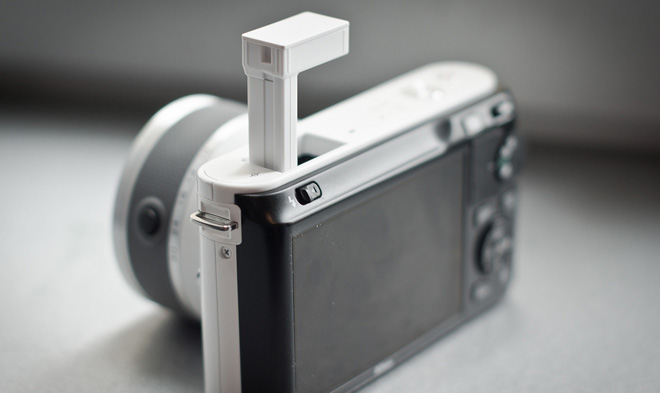 My toothbrush is better designed and I have seen higher grade plastic on a disposable razor. It is literally a 40 cent part on a $600 camera. How is this acceptable?

There are additional build issues… The plastic on the zoom barrel of the lenses for instance.

Remind you of anything? 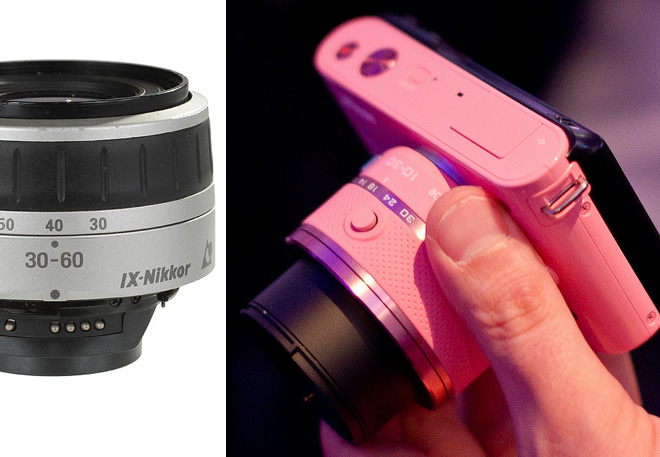 The body of the J1 itself has the ugly rounded tubby edges of the old Samsung NX100, which Samsung recently admitted they got wrong. They have now come up with the lovely Samsung NX200 which has an OLED screen, a hip retro design, and it is lighter than the J1. And this is Samsung versus Nikon we’re talking about. 3 years ago Samsung weren’t even in the enthusiast camera business and even the most undemanding of compact users considered them bottom of the pile.

Competition in the market that Nikon has positioned its mirrorless in is so fierce even phones are in on the act. The iPhone and Android smartphones, which almost everyone who will buy the J1 or V1 already have, are pocketable and have apps which are connected to social networking sites at the press of a button. The industrial design of the iPhone and its user interface puts Nikon’s cameras to shame not to mention the quality of materials used in its build.

It is sad to see Nikon put the force of their technology behind such a shoddy mainstream product that is so clearly inferior to ALL its immediate competition at the same price point in the consumer electronics market.

Since I started EOSHD nearly 2 years ago I have been a huge believer in mirrorless cameras.

Cinematographers don’t need a mirror and a optical viewfinder. Mirrorless cameras have brought improvements to live view and live view is the reason we have DSLR video in the first place. A happy accident.

Sony, Panasonic and Olympus get mirrorless and they are heavily invested in it. Now here’s the kicker – although they are like Nikon addicted to the mass market with low end offerings like the NEX C3 and GF3 – they have innovated. Panasonic with their video optimised lenses, fast contrast detect AF and the GH series with an emphasis on hybrid stills / video; Sony with the quality of their sensors, an OLED EVF, the complete abolition of an optical viewfinder on their Alphas and the sheer ambition of a their high end mirrorless NEX 7.

Nikon have innovated with a fast image processor but it is a dog of a camera.

Then they spent almost all of their launch events saying that the size of the camera was its main selling point.

Relative to what? The V1 is bigger than the GF3 in every dimension and heavier.

So the small sensor is for nothing on the V1. What about the J1?

That’s less than half a centimetre smaller in each direction than the GF3. It is basically the same but with a horrible small sensor for no significant handling gain. So what about the lenses? Surely a small sensor allows far smaller lenses? It gets worse… 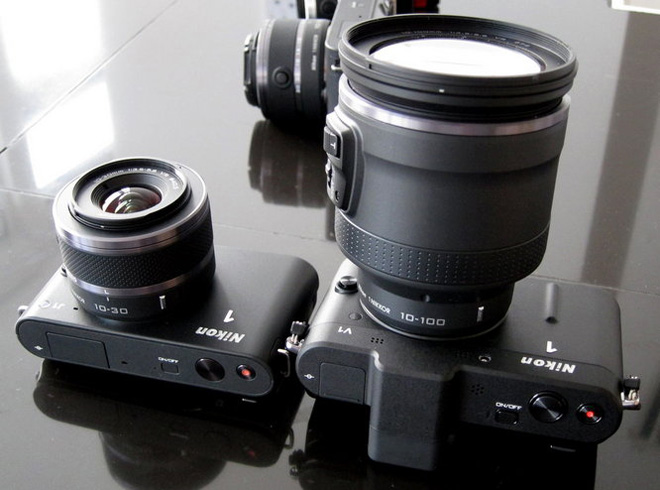 The average consumers like a long zoom, compacts are packed with super zoom lenses and they’re pocketable.

In short, long zooms are important in this market. What is the point of having a small camera you can’t pocket with the lens attached? The only pocketable compact system camera zoom lens is the Lumix 14-42mm X PZ and that is far better than anything Nikon has to offer.

Why side with Nikon? If Nikon were a person would you want to hang out? I’ve constantly got Nikon’s advertising people telling me what kind of lifestyle I should have in the company of my Nikon mirrorless camera so let’s reverse this and see what kind of person Nikon aspires to be.

Nikon remind me of a stick in the mud ageing photography traditionalist. This is part of their strength – only Nikon could come up with something as fine for photography pros as the D3.

But they are slow to recognise change and they don’t get consumer electronics like Sony or Apple do. It took Nikon a good few years longer than the competition to produce a full frame digital sensor because they believed APS-C was going to be the ultimate standard and full frame wasn’t needed.

They also passed up the opportunity to buy the rights to Adobe Photoshop because they believed it was a fad.

Maybe Nikon just wanted to get this thing out of the door, and do so quickly. It is designed for maximum profit, not necessarily to compete. I expect it puts some clear water between mirrorless and the F-mount too. For example I think Nikon will skip Expeed 4 (since 4 means ‘death’ in Japanese) and put an Expeed 5 chip in their next high end F-mount camera. A clear generation up from the mirrorless processor despite being based on similar technology. Maybe the best part of the V1 Nikon’s R&D team got out of it was the processor. Maybe it was a development test bed for that. It is certainly fast and when paired with a proper buffer and dual card slots will give us a very nice F-mount D5.

But I don’t see Nikon’s mirrorless endeavours as making that much sense! No, in 2011 they stuffed up their future mount by designing it for a small sensor that nobody will see the benefit of. Because remember that mirrorless is the future.

They will have to redesign this mirrorless mount and the cameras from scratch when the high end and pro DSLRs go completely electronic, which they will do as sure as there is progress in the field of technology.

Nikon are experts in their field of photography but it is a field that has broadened to include consumer electronics and it is here where Nikon seem to be completely out of their depth but for some marketing gimmicks suggested by the focus groups. High speed shooting! Slow mo! Best shot! Pink cameras!

Add the marketing gimmicks to uninspired engineering and you get the Nikon 1 series. But there is something else in the mix here. A half hearted laziness and a lack of conviction in the concept. 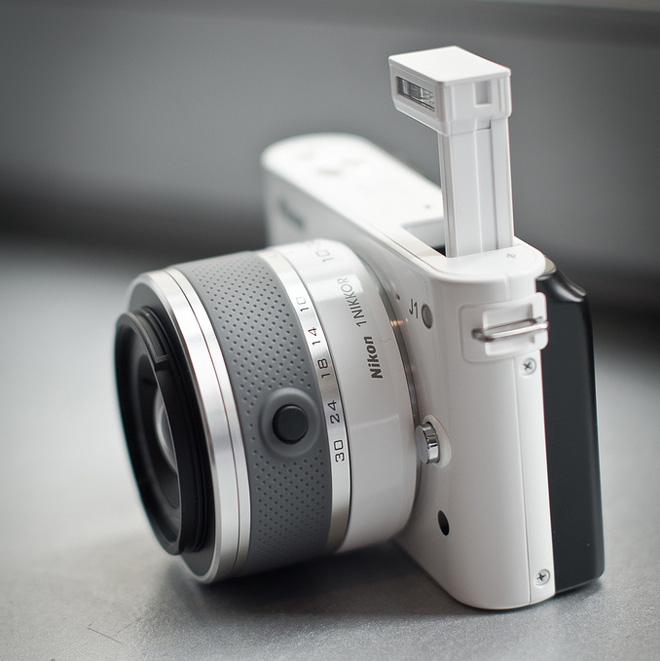 Now look at the positives of the system.

We have always lusted after a global shutter. A camera without a mechanical shutter. The Nikon J1 and V1 are that camera.

For the first time in the history of photography they don’t have a curtain, a leaf, or a mechanical shutter of any kind. They are completely silent when taking a photo and use an electronic shutter. I have no idea why Nikon didn’t make a bigger deal of this in their marketing rather than size and high speed shooting modes. I suppose because a silent camera is a bit creepy.

Although this is not achieved with a global shutter as far as I believe  (just a very fast rolling one which risks rolling shutter artefacts in stills) the outcome of this that matters for filmmakers is that the Nikon 1 series is almost certain to have the least jello of all video capable DSLRs and interchangeable lens cameras even the FS100.

The other strong point is that Expeed 3 is a very fast image processor and is capable of taking a very clean image from the sensor. Whether this is reflected in the actual video quality is yet to be seen, but early samples do show a high level of detail hobbled by a low bitrate. Whether this heavy compression is from the uploader or from the camera itself we won’t know until a video expert gets their hands on one. Nikon have been very poor at giving out review samples to filmmakers, as have Sony.

The next strong point is slow motion video.

Whilst it is a shame 720p doesn’t record at 120fps the Nikon does have the best slow-mo video features of any DSLR. It can even do 10MP 60fps (greater than 4K video) off the sensor. Huge speed and datarates. But the memory (buffer) and processor cannot sustain it for longer than a ridiculous 0.5 seconds and 30 frames – this is what we lose on by Nikon spending all their time courting the low end of the mass market.

For $1000 more we could have had a 2/3″ 4K 60p sensor here capable of rivalling the RED Scarlet. Another reason it cannot sustain 4K at 60fps is heat, the small packaging and consumer focussed design leaves no room for proper heat dispersion and cooling.

I am under no illusions on who Nikon have aimed their innovative technology at. I understand exactly why the J1 needs to be dumbed down to sell for £550. I understand marketing. It’s a fashion accessory, a sleek lifestyle gadget for those with little time and lots of money. It’s just such a shame that Nikon have chosen to squander so much time on people who don’t give one jot about photography and filmmaking.

Instead the true Nikon customers are wondering where their high end mirrorless is and where the D800 had got to. Their mid-range sucks – the D5100 is clunky and feels dated next to a Sony NEX 5N.

The V1 at £850 is just completely unforgivable though. For that money you’d expect far better image quality and at least a fast pancake. Other manufacturers give us those for £450 let alone £850. For Nikon not to is inexcusable and it the approach is destined to fail.

Disclaimer: This article is written purely from the perspective of my personal opinion and should be treated as such. My statements here are statements of opinion. Whilst I always base my opinions on the facts, some differences may be present between my world view and reality. EOSHD cannot be held responsible for statements expressed as a personal opinion.