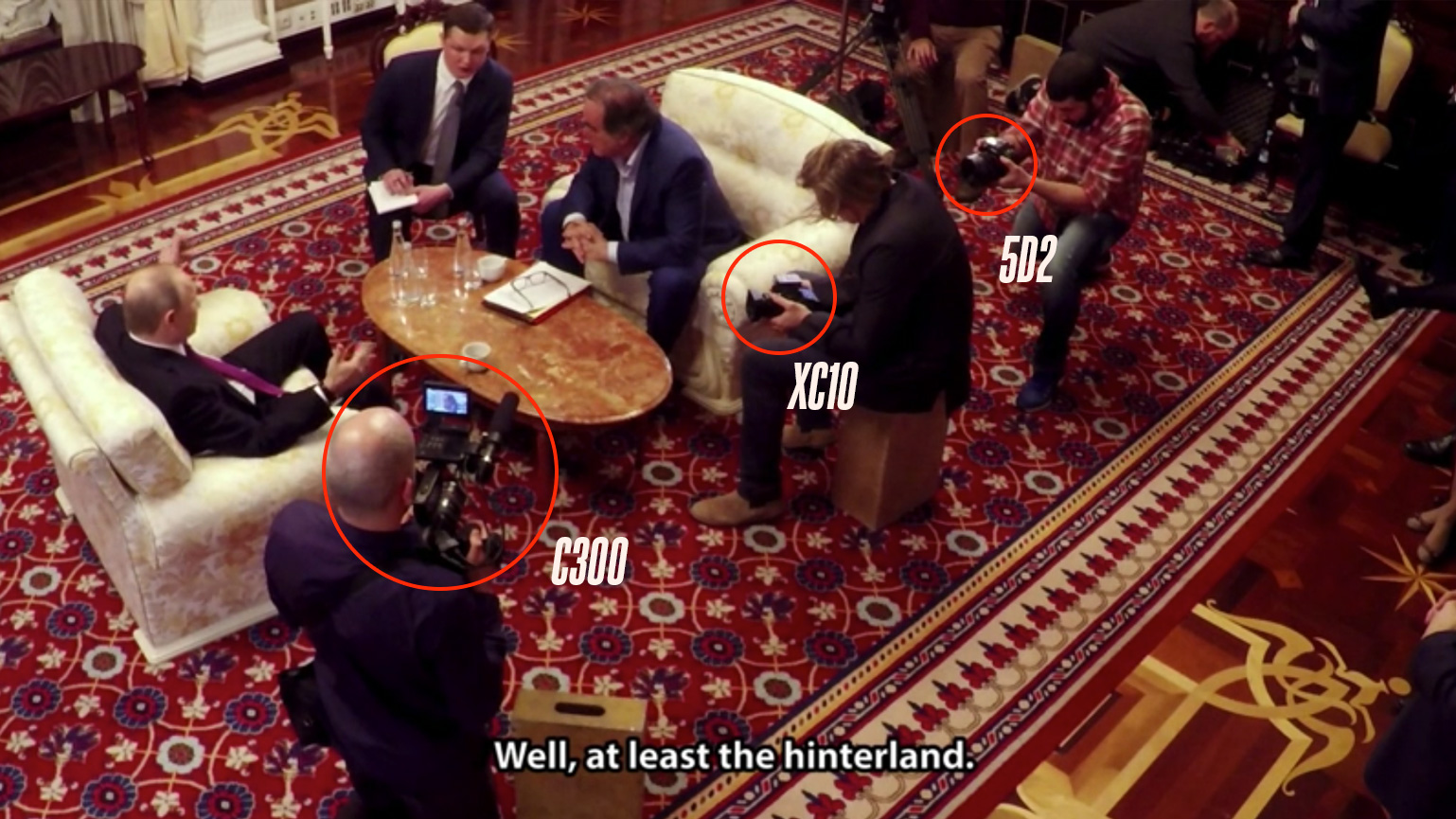 Above: Dod Mantle (with XC10) and ancient Canon DSLR-sporting crew

Oliver Stone has done a season of interviews with Vladimir Putin shot over a period of 2 years and the series is showing now on Sky Atlantic and Showtime.

It’s a fascinating watch but I couldn’t help noticing, camera geek as I am, Anthony Dod Mantle sitting there with his little Canon XC10 and occasional 5D Mark II.

Many of his crew can be seen shooting with the veteran 5D DSLR, with the moire and aliasing that entails and very soft 1080p, on a major TV series.

This is at the same time Netflix and Amazon are demanding 4K HDR as a minimum standard for acquisition. 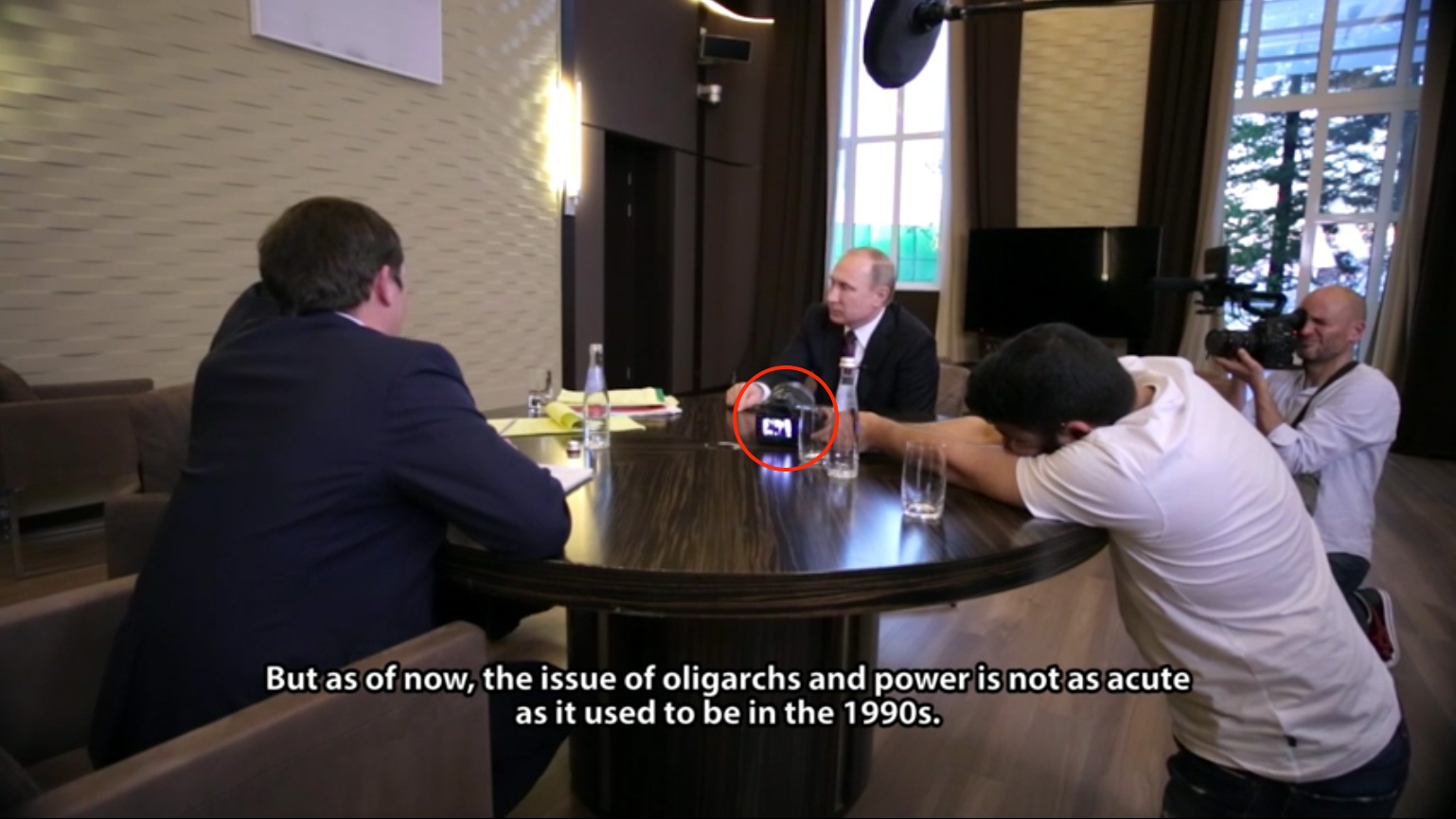 If we look at the way Anthony Dod Mantle’s crew operates on the Putin interviews, it soon becomes apparent they wanted as much coverage as possible from quite a lot of positions, some of them from on top of a table.

There’s a lot of stealing of shots and impromptu recordings while the A-cam rolls (a Cinema EOS C300 or similar).

In the most recent episode of interviews conducted with Putin in February 2017, Dod Mantle can be seen with a Canon XC10 outputting 1080p to an Atomos Ninja Star, presumably for ProRes which can be edited straight off the bat. The funny thing is, Oliver Stone obviously didn’t need a very fast turn-around for the project as it was shot over a period of 2 years! Maybe the choice of the Ninja Star was to allow smooth playback of the files for the whole crew to look at during the day or at the end of the day, on a laptop, who knows…?

Or it was a creative decision…

Dod Mantle brought Dogme ’95 to us along with Lars Von Trier.

“Since the late 2000s, the emergence of video technology in DSLR photography cameras, such as the Canon EOS 550D [T2i], has resulted in a tremendous surge of both feature and short films shot with most, if not all, of the rules pertaining to the Dogme 95 manifesto.”

That is to say, films shot in a stripped down realistic style with natural light on location with a handheld camera.

Because this is an art-style and philosophy which began with grainy VHS tape recorders and DVD-R camcorders in the late 1990’s, the dramatic increase in image quality with the DSLR revolution lead to a more traditional cinema aesthetic and higher production values, which I think Dod Mantle is probably fighting against a little bit with the Putin interviews. 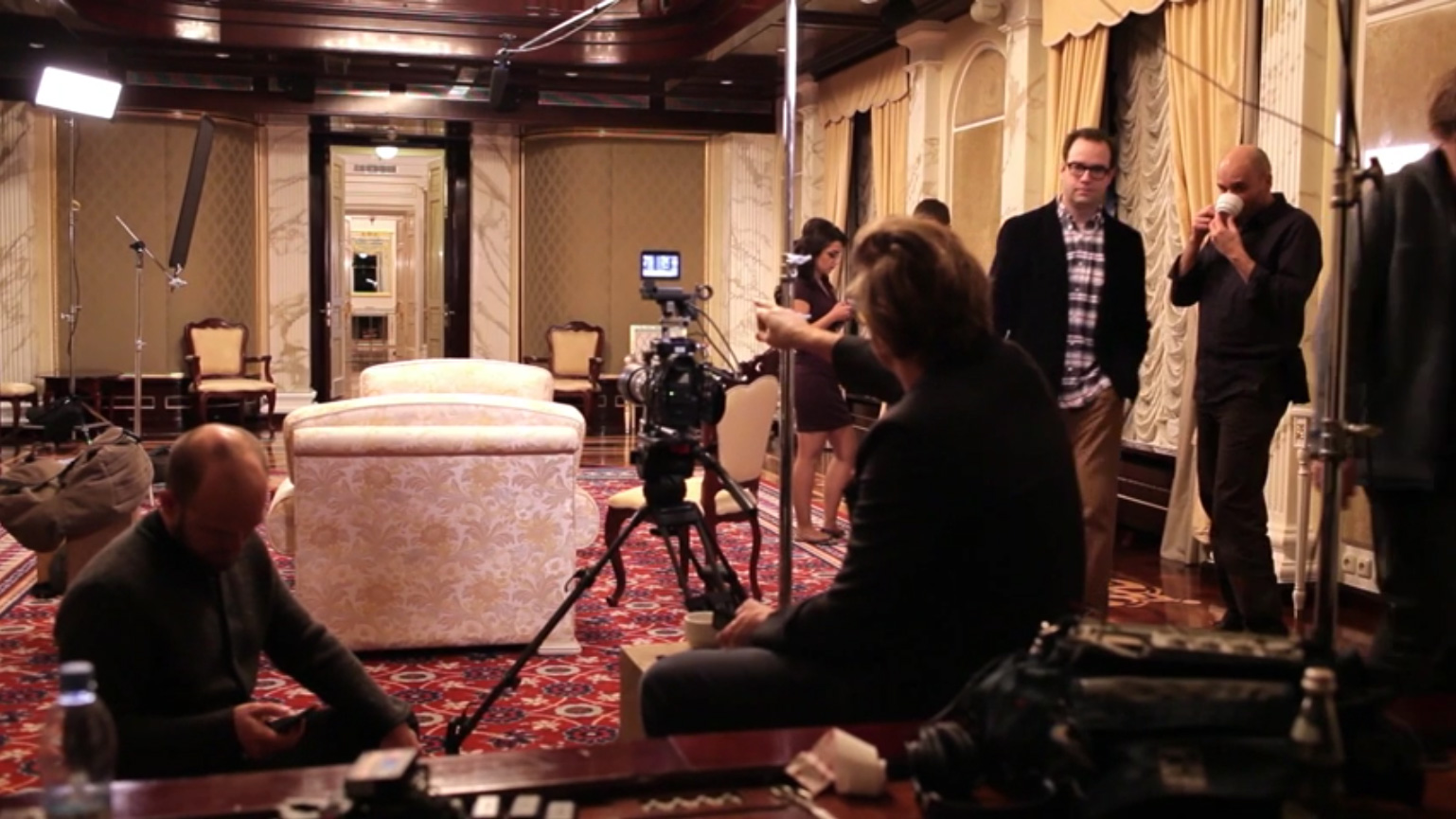 Above: moire and softness from the age-old 5D Mark II, on a modern TV series

He’s purposefully choosing quite a f-‘ed-up image. The primitive moire, lack of resolution, handheld camera, very little stabilisation although in one of the earlier 2015 scenes, a crew member has a full-on steadicam, he’s never been seen since!

I think there was a need to go as minimal as possible as to not intimidate the Russian president. You may think the idea of Putin being intimidated by a Canon C300 is a bit ridiculous but the small cameras do improve the atmosphere on set and lend a more personal environment. It’s clear even just from watching the final footage that Oliver Stone went to great lengths to build a friendly rapport with Putin and his team during the course of the shoot… Why stick a huge Alexa in his face at the key moment?

In the documentary Stone did a superb job of grilling him, and going right up to date on the Trump election and alleged Russian interference.

Anthony Dod Mantle and Oliver Stone were working together simultaneously on Edward Snowdon biopic “Snowden” which I saw in the cinema in Berlin recently.

At the end a Berlin man, who’d presumably lived under the feared Stasi, gave the film a very loud solo standing ovation!

Snowden is a completely different piece of work for Anthony Dod Mantle to these Putin interviews made around the same time. (You could say the trip to Russia to visit both Snowden and Putin was a productive one).

He’s so often gone completely the other way to the Dogme ’95 style numerous times in his career. Slumdog Millionaire has a rich, vivid cinematography and is very much Danny Boyle as much as it is Don Mantle, and with “Snowden” his camera-work was closer to the usual Hollywood spy-thriller than it was to the stage-play look of Dogme ’95. Compare the style of Lars Von Trier’s Dogville to Snowden. Same DP!

I wholeheartedly recommend seeing the Putin Interviews, on Showtime, YouTube TV in certain US cities and via VPN, or Sky Atlantic in the UK…because it’s important to hear from the other side occasionally.

In part, it is Putin spun propaganda and you feel drawn in by his intelligence, cultured upbringing and even some of his rational arguments. He’s a patriotic man who loves his country.

But would I trust him?

Well, Trump is in power for a reason.