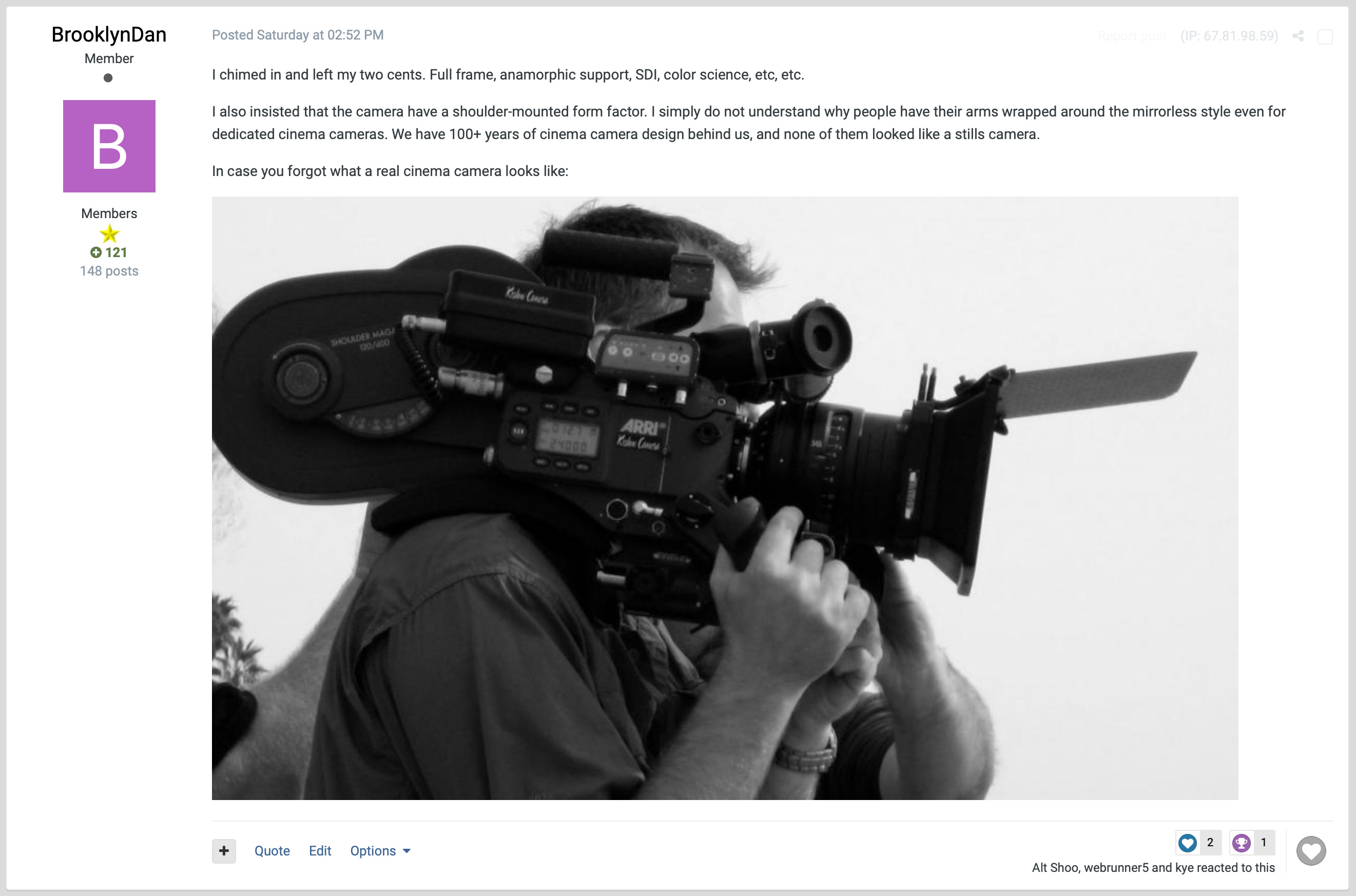 It’s not often we get a glimpse of what a major manufacturer is considering when designing a new cinema camera.

Now a survey by JVC aimed at filmmakers and content creators gives us exactly that.

Some of the questions shows JVC is considering EF mount, Micro Four Thirds or PL mount. These are the current most popular lens mounts for filmmakers, thanks to the success of Micro Four Thirds as a relatively open standard, the GH5. That alongside the success of Canon’s Cinema EOS range and abundance of EF lenses means PL mount is no longer the only game in town for cinema.

On the codec side JVC is considering ProRes, ProRes RAW, external RAW and H.265, asking users to prioritise which ones they consider most important.

Dual Native ISO is mentioned along with DCI 4K (4096 x 2160) which suggests JVC has the option to use the same Sony manufactured Micro Four Thirds sensor as the GH5S and Blackmagic Pocket Cinema Camera.

There are a smattering of professional features in the survey such as 12G SDI ports, internal ND filter, timecode and support for servo zoom lenses. JVC also wants to gauge the popularity of a range of sensor sizes, from full frame down to Micro Four Thirds. Smaller sensor sizes aren’t mentioned.

How I answered the survey

Although I agree with my forum user in the screen grab above, a mirrorless style camera would be most compelling for $4000 and under. Currently the defining factor between pro and prosumer is ergonomics, not image quality. There is a gap in the market for a small camera that bridges the gap in ergonomics. I dislike intensely even the smaller camcorder ergonomics, with their scatter-dash small buttons on a big side panel, crap-to-non-existent EVF and fussy menus. Yet on the mirrorless cameras, basic features are still missing like a built in electronically variable ND filter (example. FS5), SDI, XLR, ProRes and internal RAW recording. Certain models can be accessorised-up to provide these features (external recorder, external XLR module, etc.) but it all becomes less integrated, less portable and an expensive workaround where these things should be fully integrated, especially the ND filter and an editing codec like ProRes.

At the same time, mirrorless cameras offer the best image stabilisation and EVF on the market, the best value for money in terms of the image, the most portable bodies and lenses, some of the best autofocus depending on the manufacturer, and easily the most stealth for street and documentary shooting.

If I were to buy a $4000 cinema camera from an unfashionable brand like JVC over something like a Sony A7S III or Panasonic S1H, it would have to be pretty exceptionally well designed and fill in those gaps. We’re talking 4K ProRes minimum, ideally internal ProRes RAW, internal ND, in-body stabilisation, 120fps HFR (1080p minimum) and ideally a Blackmagic Pocket Cinema Camera 4K style body with a built in EVF – with significant amounts of Fuji X-H1 or Samsung NX1 spliced into the more basic Blackmagic chassis. BIG articulated touch screen screen, BIG EVF, very clean menus and a paired back simplicity compared to some of the more feature packed Panasonic and Sony cameras. Get the basics right – great codec, great integration of exposure tools, ND and monitoring, and it will fly.