Ah – another DSLR short set to music with a product title in the byline! Must be awful, say the Real Filmmakers. However, hopefully you will also see revealed something about the GH2 and Nokton F0.95 combo!

All of this was shot at F0.95 wide open. The lens isn’t best suited for architectural shots like in the video I must say. It is much more a cinematic portrait lens and shallow DOF tool. What I do like is that it’s rather different to any other glass I have. The bokeh is rarely round. The corners rarely sharp. There is a slightly vignette as well. It’s a bit mad.

If this lens were an animal, it’d be a bat hanging upside down in a barn.

It’s a nocturnal beast and so I let it lose in natural surroundings in the black of night on empty East Berlin streets. I only needed to go past ISO 1600 once – even though I was shooting in the black of night. Berlin isn’t a brightly lit city at all. It’s no Hong Kong. We can’t afford the electricity!

So in less than optimal conditions, the GH2 and F0.95 thrive. There are times when I’d have preferred a slightly longer focal length (say 35mm. Then shallow DOF would really start to kick off.) or the punchy contrast and edge to edge sharpness of the Leica 25mm F1.4 Four Thirds lens. But again, the Nokton punched through the blackness like no other.

I did notice a few flaws with the GH2’s sensor as a result.

In crop mode there is an electro-static-like banding across the image. I had to scrap all but one crop shot. The lens is delivering so much light from near darkness that a few weird things started to happen. Also the way the sensor handles fall-off from bright light sources like street lights is less than ideal especially when the lens is rather prone to purple fringing at F0.95!

I also find that with such delicately deft shades of grey at nighttime, the auto-WB went insane. Even some of the presets went wrong. For example the incandescent lighting preset matched moon light. Say what!?

In addition to that you REALLY need to get your display gamma right for Nokton night time footage. It looks simply dreadful if the display is too bright. Be it a monitor in the field, or your home A/V equipment, it’s much more sensitive and easier to f-up the footage from the Nokton than it is the usual DSLR lensed stuff shot at night. Without display tweakage you can be really disappointed with the results.

Other things to watch out for are the fault of the camera. There is an insane gamma shift between live view and record mode on the GH2. Fix it Panasonic!! You expose delicate shadow detail only to see it vanish when you hit record. So annoying. Most of the time I had no idea what the final shot was going to turn out like. Then you have further gamma issues in Quicktime driven NLEs! It’s a nightmare!

Also since the lack of light gives everything a very subtle low contrast look with lots of VERY gradual gradated tones, this plays into the hands of Mr Evil 8bit. He’s not a retro computer game character but a rule seemingly present in every single DSLR which dictates that one shade can’t blend seamlessly into another without looking shit. It mostly lives on plain blue skies or undecorated interior walls. I think image scaling has something to do with it as well because Mac Preview reproduces the same ugliness when doing a quick and dirty resize of a RAW file before you save it.

It’s most likely to be a compression thing though, since in live view it’s fine! Only when you hit record does it occur, and it sadly remains on the final recorded video – although it doesn’t look quite as severe on a good display – and all but vanishes on a projector!

Take a look at the sky in this clip and see what happens when I start recording: 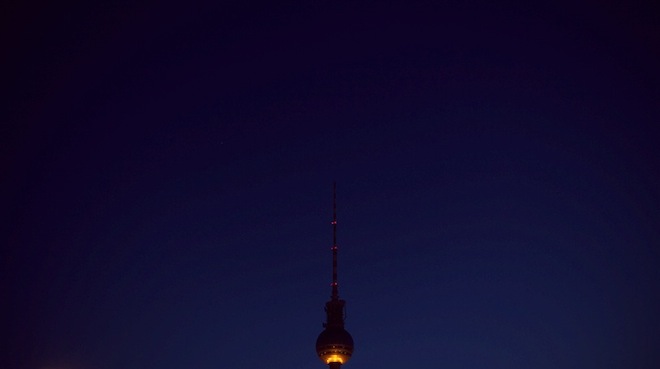 These are scaling / compression issues I’d love to have fixed with the 5D Mark III and future Lumix products and I am sure it is only a matter of time, they can’t stay still forever.

What is so fun about DSLRs is that for perfectly accessible prices I can see more than the human eye and produce low light footage which Kubrick would have struggled to make without help from NASA.