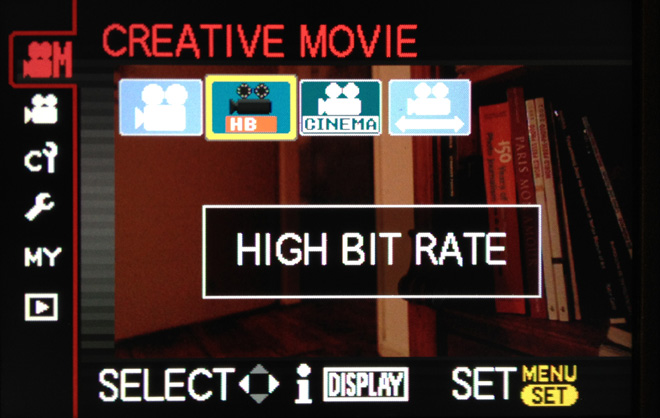 It has been a great week for the GH2, with the new official firmware update. It adds a ‘HBR’ mode which is high bitrate 25p or 30p depending on if you have a Euopean / PAL or US / Japanese NTSC GH2.

Here I’ll take a hands-on look at the new firmware in FAQ form, and whether you should use the official ‘hack’ or the unofficial one.

Once you go ‘official’ can you go back to the hack?

Yes. Panasonic seem to have quietly accepted the hack as ‘a good thing’ so they have not encrypted the new firmware or attempted to block the hack this time. If you install the official V1.1 firmware but then want to go back to the high bitrates of Vitaliy’s hack you can use PTools as normal to put V1.0E back on the camera.

Aside from 25p does the official firmware add anything else juicy?

Already with the high bitrates noise has a very fine grain but what is interesting is that I am now getting almost noise free images out of it at ISO 1600 and F2 in dim light. If you underexpose a shot, noise in the shadows is noticeable but over normally exposed areas it is very clean indeed. With Vitaliy’s hack you can go to a maximum ISO of 12,800 in video mode but with the official firmware the limit is still ISO 3200 unfortunately. We’ll have to wait for Vitaliy to combine the latest firmware with his hack.

As usual with the GH2 resolution and the cleanness of the image is like a photograph and quite simply in a different league to a Canon DSLR (7D, 5D Mk II, etc.). It is at the 1D X / FS100 mark for resolution with very low compression.

Some users have claimed they don’t get a slight gamma shift any more when hitting record. I didn’t see any evidence of that being fixed with the official firmware unfortunately.

How do I install the official firmware and where do I get it from?

Can you change between 25p and 24p on the official firmware?

What is the best way to handle the 25p footage? I hear it is in an AVCHD 50i wrapper.

Today a new version of ClipWrap 2 was released which adds support for the GH2 V1.1 25p footage. This rewraps MTS files as Quicktime. AVCHD is at heart the same H.264 video format that most Quicktime files are and it is just the outer layers that are different. With ClipWrap you don’t need to transcode or use a third party utility such as Voltaic or JES Deinterlacer to extract native 25p from the AVCHD 50i wrapper. It also means you can edit in FCP7 natively like dragging and dropping AVCHD into Premiere Pro CS5.5.

Do I need ClipWrap for the Cinema 24p mode or hacked footage?

No that is already native 24p.

Which firmware do I recommend?

This depends of course. If you are a European based shooter with a Japanese GH2 you are out of luck because NTSC cameras update to 30p. You will have to wait a bit until Vitaliy hacks the new firmware to unlock 25p on all cameras, and remove the wrapper.

If you are shooting a project where other PAL cameras are in the mix or you have trouble with certain kinds of 50hz lighting systems causing flicker, I recommend the 25p HBR mode.

If you are in the US and need to shoot 30p for broadcast now you can do that too. Remember HBR mode is 30p in a 60i wrapper on NTSC models.

Me? I will still be shooting 24p with the hack since I love the look of the higher bitrates. Although HBR mode looks GREAT, it is still only 24Mbit and with the hack you can go all the way to 176Mbit i-frame or for more reasonable files sizes 44Mbit long GOP.