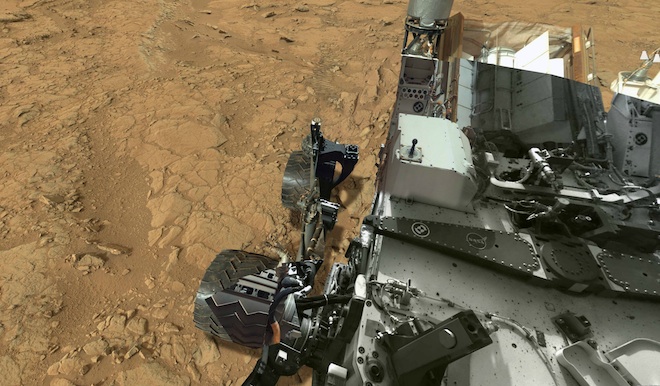 Thanks to low weight and small size GoPro cameras will be part of the next NASA manned space flight, possibly to Mars.

NASA have a poor track record for cameras. Curiosity for example isn’t capable of video and has just a 2MP CCD camera.

For the next Rover and other space missions NASA are set to use custom engineered 4K Go Pro cameras to give us crisp martian landscapes at a high bitrate.

Insiders say NASA was close to choosing the Nikon D800 as the mast-camera on the next rover but the full frame sensor put it at a disadvantage for telephoto shots and the zooms are a bit chunky.

The GoPro model NASA have chosen is a customised version with interchangeable lens mount and 4K at up to 60fps. NASA will be “sending a few smaller lenses up there as well” but it is not known which. Several Canon FD lenses are known to be able to withstand the high levels of cosmic radiation present in outer space.

Mars Gigapixel Panorama – Curiosity rover: Martian solar days 136-149 in Out of this World

Above: Current imagery from Mars is cobbled together with 2MP images

Asked who would be ‘changing lenses in outer space’, NASA said a camera operator would be sent up. NASA are said to have enlisted Zacuto for technical support and it is confirmed Steve Weiss will be going up ‘with the camera’ as operator.

Lead engineer Bob Billworth also had some good news for Panasonic fans, saying the GH2 would be onboard NASA’s next Mars rover (provisionally dubbed ‘Lumax’) to capture video. Billworth confirms it will indeed be a hacked GH2. Vitaliy Kiselev, recently recruited by the Russian Federal Space Agency as a camera firmware programmer had this to say about the news his hack would soon be in outer space:

“I am displeased. It is a conspiracy by the Americans to use my hack as propaganda for interspace colonialism disguised as ‘science'”

When challenged by journalists what would happen if the hacked firmware required a battery pull in outer space, NASA replied that via camera operator Steve Weiss they would have a remote way of resetting the firmware and restarting the camera in the event it crashes. Crashes on the current rover Curiosity are common and thought to be caused by frequent gamma ray bursts from Planet 5D.

Asked why they were not sending the newer Panasonic GH3 into space, NASA officials replied that many types of martian rock formations can cause moire and aliasing on that model.

Asked why they were not sending the Canon 7D into space, NASA replied that they would love to catapult a bunch of 7Ds from the earth and send them hurtling into a dark oblivion but countered that the Cinema EOS range had done that anyway.

Asked immediately afterwards why they hated Canon so much, NASA replied that they are “more of a Nikon guy” and that the 360 degree mode dial on the 700D did not tempt them back and that the small size of the GoPro made more sense if travelling 78 million kilometres. In tests with astronauts NASA discovered they preferred to shoot 1080/60p on the GH3 and lenses like the Olympus 75mm F1.8 were great at capturing asteroids in slow-motion.