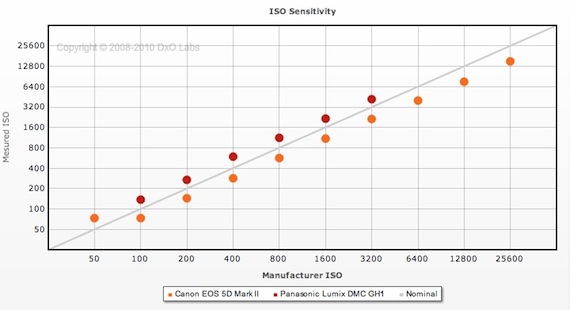 There is a new aspect to consider when shooting video on DSLRs. According to sensor benchmarking solution provider DXOMark, the Panasonic GH1 is the only camera which understates it’s actual ISO sensitivity relative to the competition.

I had first noticed this in my own head-to-head test of the Panasonic GH1 and Canon 5D Mark II earlier this year. The GH1 always seems to yield a brighter image at the same settings as the Canon and with the same lens. I also compared the GH1 to the 7D and found the same, whilst DXOMark also shows the same results against Nikon cameras such as the D3S.

Although the Panasonic GH1’s sensor is still not as clean as the 5D Mark II at the same measured ISO, this goes some way to explaining why the perceived gap in noise performance is bigger than it actually is.

As the boost is multiplied, so is the discrepancy. With both cameras set to ISO 1600, the GH1 is measured at ISO 2000 whilst the 5D Mark II is measured at approximately ISO 1250. That’s a full ISO 750 difference in exposure and noise – which equates to almost a 2 stop advantage for the GH1 with the same lens, aperture and shutter speed when both cameras are set to ISO 1600.

It appears that in order for ISO sensitivity noise results to look more impressive in reviews, almost all DSLR manufacturers’ version of ISO 1600 is actually much lower than reality. The Canon is really operating to a standard closer to ISO 1250 and noise is reduced. This is misleading, since it is not operating at ISO 1600 at all!

The GH1 goes in completely the opposite direction (crazily stupid from a marketing point of view). All camera reviews compare sensor performance at each ISO level, and would have found the GH1 to be even more noisy at ISO 1600 than necessary when comparing it to a competing model. Unless the reviewers did a direct comparison at the same time with the same lens, shutter speed and aperture they would not have noticed the need for different exposure compensation for the same shot.

When comparing the ISO noise performance of the GH1 to the Canon 5D Mark II in my own tests I found it more useful to compare the GH1 at ISO 400 to the 5D Mark II at ISO 800 – and at that they are a lot closer in terms of noise at those settings than when both set to ISO 800, yet yield the same level of exposure.

How has this come about?

It is interesting to note that when the expansion (LO) ISO is enabled on the 5D Mark II to achieve ISO 50 the measured result on the DXOMark chart is the same as when set to ISO 100. My theory is that it could have something to do with native ISO of the sensor and may explain why the GH1 is calibrated so differently.

If the native ISO of the 5D Mark II is 75 and the Panasonic GH1 is 150, when the electronic boost to multiply sensitivity is applied on the sensor to achieve higher ISO ratings, the discrepancy is maintained. Thus 150×2 is ISO 300 and 75×2 is ISO 150 which is exactly what the DXOMark chart shows.

Starting from different base levels of sensitivity (150 on the GH1 versus 75 on the 5D Mark II) means that each company’s calibration method, measurements and method to achieve the full ISO boost up to the highest ISO rating achievable would have been totally skewed relative to each other.