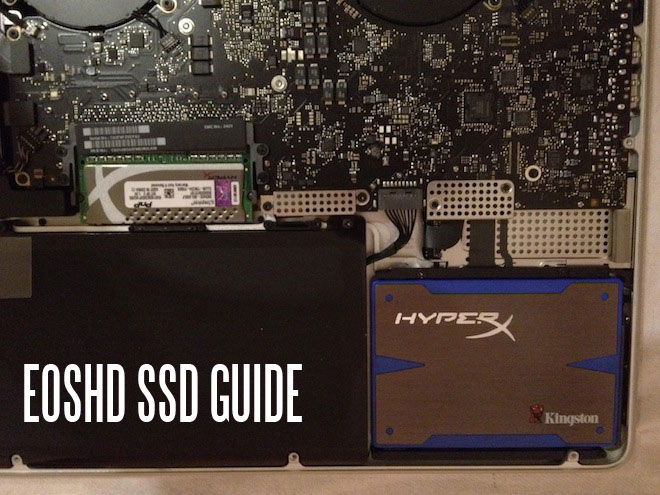 Like FCPX Apple shipped their 2011 MacBook Pro models somewhat under-specced for video editing. Despite having a quad core model I was still getting pretty shoddy performance in Premiere Pro CS5.5 with Apple’s default configuration of 4GB of RAM and a 750GB 5400RPM hard drive on occasions.

Although the processor is an absolute beast, it isn’t coupled to the RAM and disk it really deserves. Apple did this for supply reasons as well as cost so they have a good excuse, but it still sucks.

The world of SSDs takes some research. For a start they are a lot more expensive than an equivalent mechanical hard drive of the same price so it is worth being discerning with your choice of one.

What are the best drives? It essentially comes down to two things – firmware support and the type of memory modules in use. Not all 6G drives are equal, far from it. Especially when it comes to write speeds under heavy workloads. You will need good performance in both senses for video editing.

First determine if your machine has SATA 2 or 3. If it has the older SATA 2 interface only, your stark choice is to either upgrade the entire main board or settle for a cheaper 3G SSD. (SATA III is in the latest MacBook Pros, SATA 2 in older ones – check!). It is still a very worthwhile upgrade as speed will still be in a different league to a mechanical hard drive.

A middle of the road 6G drive can do write speeds of 250MB/s peak. Most of the current drives by Crucial, Samsung and Intel are rated around that. Why?

The companies blazing a performance trail with SSDs are OCZ, OWC (Other World Computers) and Kingston. For a premium on price and lower availability you can get a drive from one of these companies and it will perform far better than the more common ones by Intel, Crucial, etc.

OWC Extreme 6G drives are not very common in the UK and Europe at all but you can order from the US. OCZ’s Vertex 3 is the best known performance leader in SSDs right now and usually cheaper than the Kingston HyperX but I went for the Kingston since I found it for a very good price on Amazon in the UK and it is said to be slightly more reliable for long term use. It even slightly outperforms the Vertex 3.

With the latest firmware update it does 550MB/s read speeds and 520MB/s write speeds. (These are peak values and in reality a good SSD will sustain about half under normal use). This compares to the pathetic 30-60MB/s of a mechanical laptop hard drive! 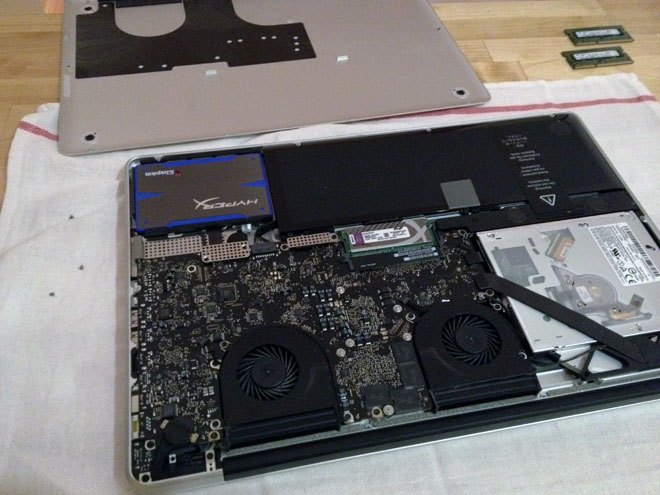 The first thing that strikes you upon opening the latest 2011 MacBook Pro is how well built it is certainly compared to the now very dated pre-unibody models. We know from his biography that Steve Jobs liked to hone the stuff the user couldn’t even see, and finally in 2011 Foxconn made good on his endeavour. This is the state of the art of Chinese manufacturing and I have to admit it is getting rather impressive even though most of the OS and outward design is American.

Putting the SSD in was very easy. Unscrew 10 PH00 screws, flip the bottom of the case off, unscrew 2x hard drive brackets (4x PH00 screws) taking care to remove the notches from the old hard drive and screwing them into the new one (Torx screw driver required for those). The SATA cable is delicate and thinner than Lady GaGa so be careful with that.

I also put some 1600Mhz Kingston HyperX RAM in my MacBook whilst I was at it. 8GB is a minimum now for video work and the 1600Mhz clock gives a small but useful boost to the system, and is the maximum the new Sandy Bridge MacBooks support. The MacBook 17″ 2011 only ships with bog standard 1066Mhz RAM by Samsung.

My main purchasing dilemma with the SSD for my MacBook was what capacity to get. I was very reluctant to get anything less than the biggest available (480GB) but these were constantly out of stock and over £700 a piece. Kingston don’t even yet do their premium HyperX SSD in sizes over 240GB.

Happily OWC have a solution called the Data Doubler whereby you can place a second drive in your MacBook Pro’s optical drive bay in place of the rather obsolete DVD-R/W drive.

This is a kit which has a USB caddy to put your MacBook optical drive in so you can still use it in emergencies (like for OSX recovery or where the required software cannot be downloaded) and a mounting bracket to secure your second SSD or hard disk snuggly into the space left by the optical drive.

Whether you put another speedy SSD in there or a standard drive for 1TB of extra storage is up to you. I haven’t yet actually decided. My original 750GB MacBook hard disk is currently sitting in a USB caddy and it seems pretty useful like that as an external data store, but if you want to work with a LOT of footage ideally you’d want to load it from an SSD not the slower 5400RPM drive. If you feel you really will tip over the 240GB offered by one SSD through installing so many apps and working with so much footage at once from the scratch drive where performance is critical, go for the 2nd SSD.

One thing you need to watch out for though is that some MacBook Pros don’t offer SATA 3 on the optical drive bay, only for the main hard drive. In that case you’d be better off buying a cheaper 3G SSD or sticking the old hard drive back in.

It helps to do a Time Machine backup before you install the SSD so you can return your system to your prior state with the minimum of hassle. Actually I chose to do a clean install of Leopard and then upgrade to Lion and it only took 2 hours including the download of Lion. The App Store lets you reinstall Lion without re-purchasing, you just login again with your Apple ID.

I’m working off one 240GB drive for OSX Lion and all my apps no problem – that basic stuff uses 60GB and the rest can be given over to anything else performance critical like high bitrate AVCHD files in Premiere and as a scratch disk for rendered video. If you are working with a lot of ProRes 4-4-4 stuff or RAW video really you’d be best off with two 480GB SSDs as a minimum or waiting until capacities go up and prices come down – as they inevitably will.

Demand is high for SSDs are the moment and continues to grow – supply has a habit of catching up.

So is it better to wait?

It depends – I think not. The benefits to overall system performance are just so huge, I actually wish I’d done the switch sooner.