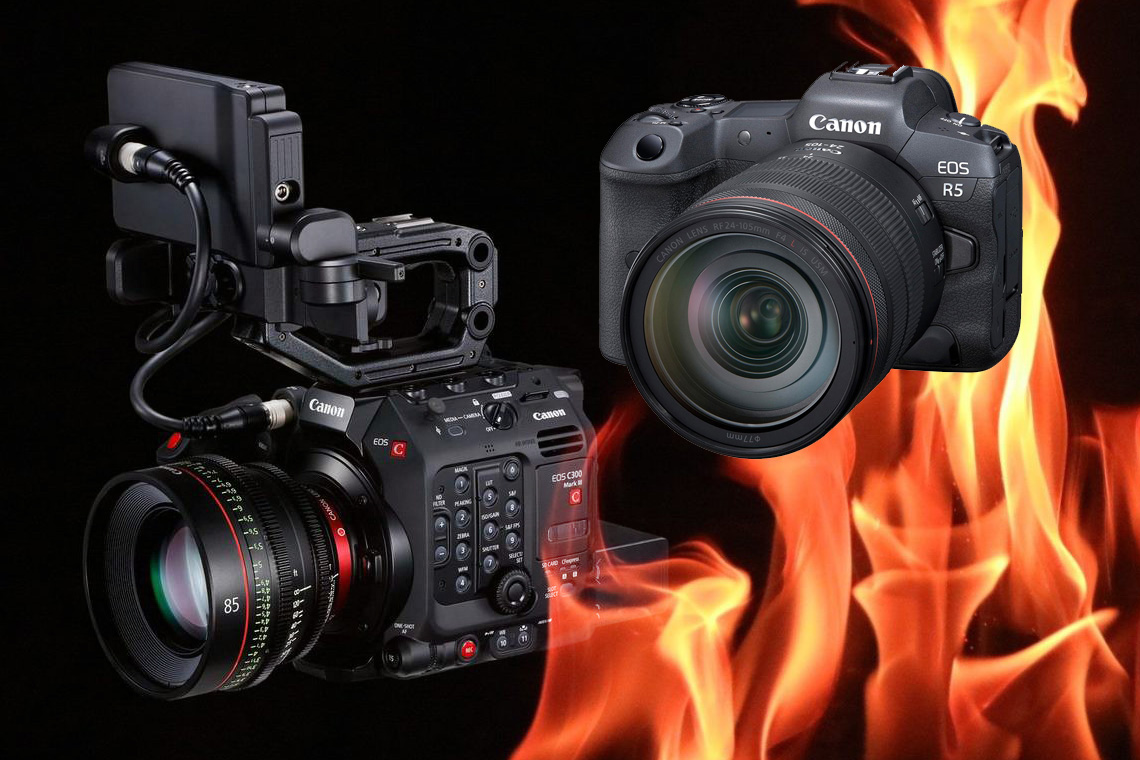 Back in April, Canon announced the video specs of the EOS R5 with much hubris.

According to Canon themselves.

So I don’t think Canon intended the EOS R5 overheating to be a purposeful cripple hammer.

I think all the signs point to it being a major engineering cock-up.

“On the set of high-end productions such as commercials, dramas and documentaries, the EOS R5 is an ideal partner to the likes of Canon’s brand-new EOS C300 Mark III”

“Set to redefine mirrorless, today’s update confirms the incredible recording capabilities of the EOS R5 including internal 8K RAW up to 29.97fps and suitability with high-end production workflows”

“The EOS R5 boasts features seen only in high-end cinema cameras many times its price point and video features no other mirrorless camera on the market offers.”

“Created as a direct response to growing demand for content creators to shoot both high-quality film and stills, the EOS R5 holds its own as the lead camera in productions – going over and above industry standards and achieving outstanding 8K.”

“The camera will shoot comfortably on high-end production sets”

“Last month we revealed specs confirming that we have achieved the ‘impossible’ with the EOS R5. Today, we go one step further in showing we are challenging the market and showcasing our unparalleled strength – revealing the camera will offer video recording capabilities unseen in any other mirrorless camera. With its ability to record in cinema industry-standard formats and codecs, the EOS R5 is an ideal lead camera for many productions but also, given its compatibility with cinema workflows, the camera will shoot comfortably on high-end production sets.”

Thanks to the anonymous source for the tip off.

All the signs point to this being recall territory. There is still no sign of further shipments in bulk and the initial ones were much smaller than normal.

Let’s not pretend like DPReview this camera isn’t marketed for professional video use. The proof is there for all to see!

The opinion I have is shifting – overheating isn’t a feature to segment the small cameras and to discourage pro use of the camera for video. I think that Canon were feeling the heat from Sony who had stolen a march in the mirrorless market and on video. The modern content creator Canon refers to, is a multimedia shooter who needs the best quality stills and video in one body, which for the past 10 years I’ve been asking Canon to implement.

So in order to counter the perception that Canon were behind in video specs and technologically, an all-guns blazing approach to the EOS R5 has resulted in technology that isn’t market ready or mature. The reliability is just not as expected or as hoped for. It might also be that senior management & marketing people wanted the EOS R5 out the door before the engineers and internal Canon testers were comfortable with how it performed.

The overheating may even be the result of unexpected engineering challenges with the LSI, or major bugs.

Until Canon gets on top of this issue, it is simply unwise to use these cameras on the same shoot as a cinema camera.

It makes a lot more sense to use the Panasonic S1H or Sony A7S III instead.