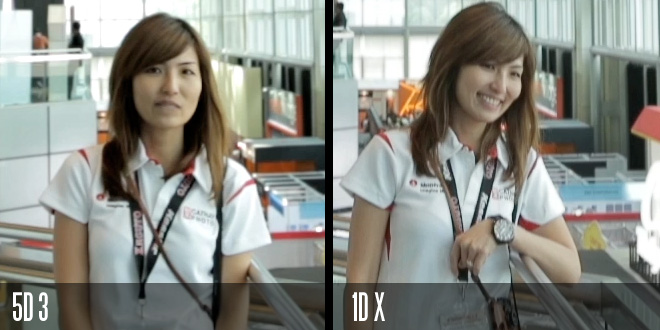 Above: notice the detail on the girl’s hair and shirt collar in the 1D X shot

Dan Chung (watch the comparison video) has had a play with the long delayed Canon 1D X, the flagship pro full frame DSLR which was announced last year. Dan’s find is worth paying close attention to because it seems the 1D X’s image quality in video mode is exactly what we were hoping for from the 5D Mark III.

Below is my technical analysis of what is going on.

The Canon 1D X has a sensor that is faster and better in low light relative to the 5D Mark III. It can shoot at a very high 14fps in burst JPEG mode, 12fps in raw. With more powerful hardware (and a price tag to match), image quality in video mode is improved with better resolution (and seemingly wider dynamic range too – though this has yet to be fully tested).

The reason for the resolution advantage is due to significant architectural changes in the camera over the 5D Mark III rather than just a firmware switch.

Firstly the image processor has two cores with dedicated functions. Sensor readout and compression are dealt with separately. The first DIGIC 5 core is solely responsible for reading the sensor. The 2nd core does the compression.

By comparison in the 5D Mark III one chip tries to do both – and does so rather poorly. (By the way, the GH2 with a 3 core processor for $700 has none of the same issues).

Next, the sensor readout itself is far faster on the 1D X, mainly to support a faster continuous burst rate for stills. This improves video because more pixel data can be read out from the sensor. The bandwidth between CMOS sensor and image processor is also far larger (and entirely digital, with more output channels and more analogue to digital converters on the sensor side).

So the 1D X in terms of hardware is what the 5D Mark III should have been to keep the improvements coming.

The 1D X looks startlingly similar to the 4K EOS. That is because the 1D C is indeed based on similar hardware. That camera has cooling improvements to allow for the even higher resolution.

Though it is early days with the 1D X (it isn’t even being produced in quantity yet) to my eye resolution looks similar to the FS100 if not quite up there with the hacked GH2 and Canon C300.

The 1D X is £5299 in the UK and $6799 in the US. This is not much under the Sony FS700 which gives you better handling, better focus aids, more video functionality, built in NDs and slow mo. However the 1D X has the advantage of a full frame sensor. That potentially brings better dynamic range with a smoother highlight roll off as well as just a shallower depth of field but it remains to be seen whether or not the improved sensor readout and compression engine does bring improvements here.

So if you are considering a 1D C for the full frame look but don’t plan to shoot 4K yet, the 1D X is looking pretty reasonable at $6799. This is less than half the price of the $15,000 Cinema EOS big brother, but sadly significantly out of the price range of 5D Mark III owners.

Compared to Nikon’s flagship, the D4 of course it is a no contest video wise. The D4’s image in full frame mode just does not compete and to even call it 1080p is misleading. The D800 however is sharp, but there are issues with moire to contend with as well as some heavy aliasing especially in 720p/60p mode.