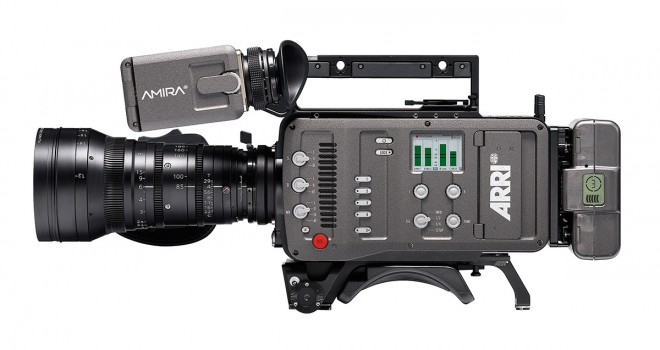 Full information on the AMIRA can be seen at CVP

Looking at the Oscar nominations recently at EOSHD, with not a Red camera in sight, it’s clear Arri are a run-away success in the filmmaking industry. Now Arri are gunning for the Canon C300 and C500 with a camera which could seriously erode the market for Cinema EOS cameras at the high end of the broadcast and single-operator videographer market. The Amira’s pricing starts at 25,980 euros which puts it in the Sony F55 and Canon C500 range.

What’s the secret to Arri’s success?

I’m putting my cards on the table straight away… I love the AMIRA.

It’s as close to being the perfectly designed single-operator camera as I’ve ever seen.

This pricing points at the AMIRA being made in larger quantities than the Alexa and it’s even a realistic owner proposition for professional videographers looking to make a serious investment in gear.

Arri are already popular at the top of the broadcast and professional video market with the Alexa. It’s a popular rental choice and something you’ll find on a lot of TV & corporate shoots, especially in ProRes guise.

The AMIRA speaks loud and clear for what makes Arri such a success. So what IS that recipe exactly? 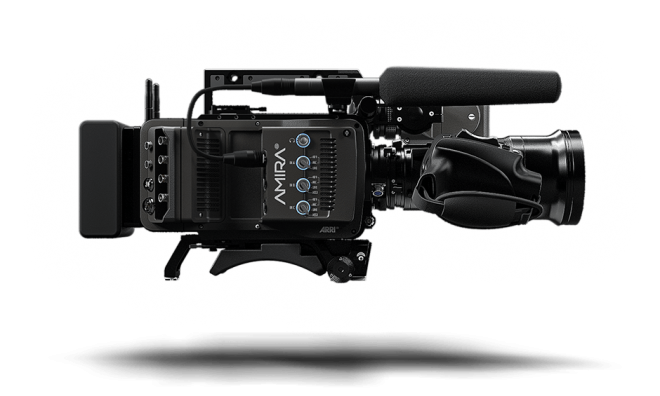 1. It’s not about the headline specs, but the overall image

Red have always had the headline grabbing specs. 4K, 5K, and multiple new sensors. Arri don’t even have a 4K solution yet.

Are filmmakers at the top of the industry seduced by the headlines or do they evaluate the cameras in-person? It’s the latter of course, as one filmmaker recently explained on the EOSHD forum, the Alexa is way ahead of Red when it comes to the overall package.

The noise texture is more film-like on the Alexa relative to the Epic and MX sensor (especially when tungsten white balanced) and even Dragon has a more digital looking texture. The Alexa has superior shadows, with the Red MX sensor giving a lot of blue splotchy noise in low light. The Alexa’s 14.5 stop dynamic range is handled superbly while not all of the Red’s 13.5 stop dynamic range is usable. The Alexa has superior mid-range tonality and colour. Red’s compressed raw codec doesn’t handle skin and foliage as well as ArriRAW, lending a more plastic look to these emotionally resonant areas of the subject matter. The Alexa’s colour science matches Kodak 5219 almost exactly and offers smooth creamy skin tones and beautiful green foliage whereas Red’s colour science isn’t as good. The optical low pass filter on Red cameras can be prone to internal reflections and a colour cast over highlights whereas the Alexa has a roll-off like film.

4K will need to be added to the Arri stable sooner or later, but up to this point the Alexa has set the standard, not the Epic. 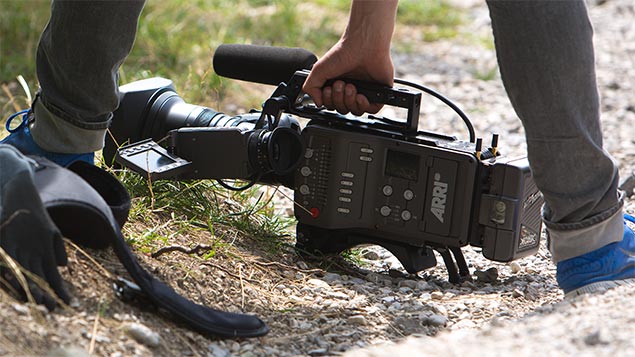 Arri have a wider support network worldwide and build on a much larger historic presence in the film industry than any other competitor especially Red. ProRes suits TV production and ArriRaw suits cinema production. RedCode just isn’t as well matched to the existing production environment.

Exposure, focus, stability. These are the most important aspects of a camera. Why are these so often the last thing you see on the specs sheet? The AMIRA is designed to be shot with from the shoulder. It sits there for stability. It puts the lens in the perfect place to be focused. It has superb ergonomics and exposure aids. Simple, no? The camera isn’t cluttered with buttons and the EVF / LCD is placed in line of sight rather than somewhere weird like on the top or back of the camera.

The Canon C300’s ergonomic design has garnered a lot of praise for being easy to shoot with handheld in a run & gun situation – but I just don’t agree. Compared to Arri and Aaton it just doesn’t have the same shoulder balance or shoulder-optimised ergonomics. A contractor for the BBC had seen cameramen on Top Gear use the Canon C300 in a run & gun documentary situation. Their experience with the camera was almost 100% negative. The C300’s ergonomics have garnered praise only because the competition has been even worse.

In my opinion the AMIRA is massively superior as a rental option over the C300 and C500. Why?

The C500 needs an external recorder for optimal image quality. It doesn’t have ProRes and the camera it’s based on, the C300 doesn’t have slow-mo either, nor the newer CFast 2.0 support, or perfect shoulder ergonomics and balance. The EVF on the AMIRA is also superior.

While the Red EPIC, Sony F5 and F55 all need rigs, monitors and EVFs bolting on as extras, the AMIRA has a built in 1280 x 1024 OLED eyepiece and a fold-away LCD monitor. The monitor is a live view display like on a DSLR but also provides access to camera functions without the camera having to be removed from the shoulder. A WiFi interface provides remote control. 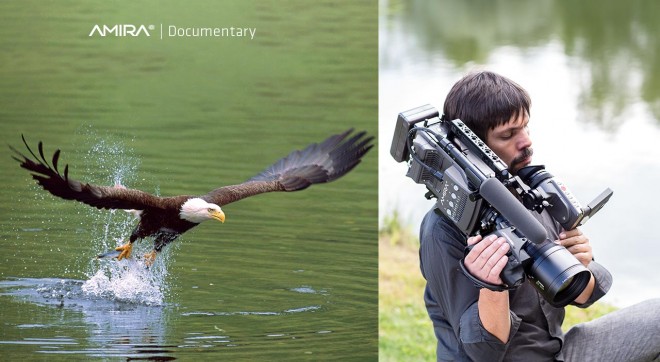 ProRes has been key to the Alexa. If the Alexa only recorded raw with the external recorder, it would never have taken off like it has done in the broadcast and broader pro-videography market. The AMIRA gives us all flavours of ProRes – LT, 422, 422HQ and 444.

LT is of use to news shooters who need small file sizes and a fast turn-around, even something that can be edited from a laptop on location in 10 minutes. Then you go up the image quality scale all the way to 444 colour sampling. It’s perfect. Then you have the choice of Rec 709 if you don’t have the time to colour-grade the results (again – great for a fast workflow) or Log C when you want to add a LUT or grade the image extensively. The camera also has support for built in LUTs for custom colour grading profiles, with the results coming direct from the card.

Only Blackmagic come close to Arri when it comes to the codec. 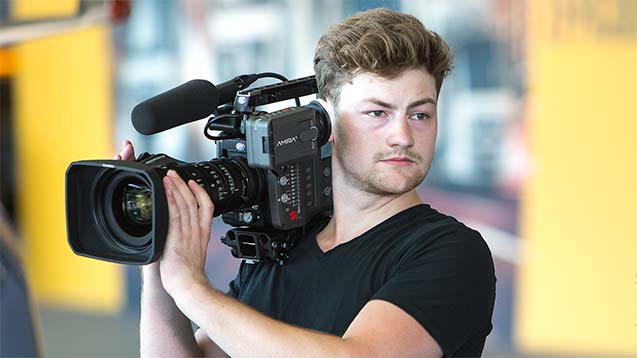 Coming from the DSLR world I must admit to being a little envious of what Arri have designed here.

It’s exactly how I’d prefer to use a DSLR. Get rid of the tripods, the rigs, the monitors, the transcoding, raw workflows, poor audio support and form factors designed for stills. Get the camera on the shoulder and shoot, focus, expose. It should be easy. In 2014, the oldest camera company is still the one getting it right! Sony are a great consumer electronics company. They don’t have the filmmaking DNA of Arri which dates back almost 100 years to 1917. Canon are a great photographic company. They’ve made a good start with Cinema EOS but the AMIRA is straight-forwardly superior in almost every way. Blackmagic have made a very welcome splash on price and image quality but their ergonomics and audio are just not there yet. Panasonic – well, you’ll have to wait and see because 2014 is going to be a very big year for them.

Arri are actually a small company compared to Canon, Sony and Panasonic. They have just over 1500 employees and revenue in the million euros rather than billions. It isn’t a matter of throwing money at a problem and seeing it solved. It’s more about intelligent design and knowing exactly the needs of the people you are aiming it at. Arri have a clear aim and a clear understanding of the people they’re selling to. For Arri’s digital users the AMIRA fills a hole which the Alexa left – the big studio camera is not a great run & gun camera. The AMIRA is.

I think it will be a massive success and all others should take note of what the ingredients are here.

That’s it in a nutshell. I think this should be the template for the aspirations of many other camera builders especially Blackmagic and Panasonic in 2014, who can use the AMIRA as a benchmark.