A patent filing from 2009 and published on the 30th June 2011 reveals Panasonic have a prototype consumer camcorder with interchangeable lens mount!

According to 43rumors.com the patent filing is actually for the grip mechanism, which sees a DSLR style grip folding into the camera body when not needed. That allows the camcorder to handle both as DSLR and a standard camcorder. It also features a rotating LCD and internal EVF.

The form factor is much more video orientated than the GH2. It is a bit like a consumer version of the RED EPIC, which also has a DSLR style hand grip and ‘shutter’ release button.

Sony have already entered this market with the video orientated VG10 based on the NEX5. That however has reportedly been a massive sales flop with many mainstream retailers withdrawing it from shelves. So any Panasonic offering is still firmly unofficial.

Is it a good idea? I’m not sure. Camcorders face a growing threat from both video capable compacts like the Sony HX9v and smart-phones, especially for casual shooting or travelling. Most people have stopped bringing several devices with them in their travel bags, replacing them with one small multi-talented one. This convergence was first seen with mobile phones and it killed off the ‘standard’ Nokia. This convergence is the driver behind DSLR video, and also the driving concept behind the GH2.

Interchangeable lens camcorders are only exciting if they’re serious tools. For casual consumers, they’d be better off with a fixed lens compact or a pocketable smart-phone. The idea of my girlfriend or mum having an interchangeable lens camera of any kind for casual snapping is absurd! Surely this is something the corporations have yet to realise.

If this prototype is going to be prosumer (affordable) and yet feature packed for filmmakers, I’ll embrace it. If it’s a dumbed down product like the GF3, I like many others won’t see a need to fit it into our lives when there are so many more convenient alternatives. So please take note Panasonic.

GH3 with an even more ‘free-angle’ LCD

Panasonic also have a patent filing which shows a GH style camera with an LCD which can flip away vertically from the camera body as well as rotate sideways. See image below. As with all patents this by no means official yet either. It may have been planned for the GH2 and abandoned due to durability concerns. 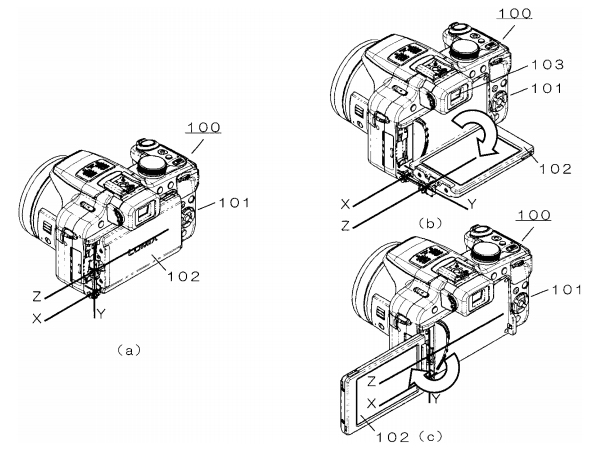