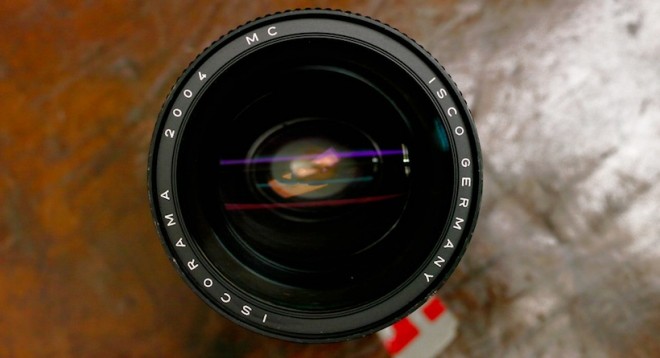 16:9 is very 2009. EOSHD.com recently came across a video (at the bottom of this page), which shows a Panasonic LA7200 anamorphic conversion lens on a Canon A1 camcorder. This is shot in 16:9 but converted to Cinemascope style 2:35 with the anamorphic lens. As you can see when you watch it, the shots look great and it looks sharp like Iscorama footage.

Unlike the much smaller Iscorama 36 or 42, the LG7200 has a filter thread size of 72mm, which means it’s possible to mount it on much larger DSLR lenses than you would a Iscorama.

There are currently two complaints about the LA7200, despite the fact it is less than a quarter of the Iscorama’s price on eBay and half the cost of a Kowa 8Z. One complaint is that the left & right edges of the frame are blurry with fast glass. So a 50mm F1.4 is out, unless you stop it down to F4, losing quite a bit of shallow depth and low light performance in the process. But I believe this is dependant on the lens, and a 50mm FD lens is not the best to use with this anamorphic adapter.

The 2nd criticism I’ve heard, is that the lens does not allow you to use a diopter and therefore you cannot focus very closely. I aim to look into this in my tests as well, and see what results different lenses produce. As you can see on the A1 footage above, neither complaint can be levelled at the LA7200 when combined with the smaller chipped A1 camera & lens combination so I am sure a work-around for the larger sensor DSLRS can be found.

I will find out soon enough – one is on it’s way, so I will put it’s through it’s paces on both the GH1 and 5DMkII. The GH1 results should go more or less for the 7D as well, due to the similar sensor size.

The larger filter thread is handy for mounting the lens on a very wide Canon 10-22mm EFS, but it also remains to be seen from my tests whether you can go this wide with the Panasonic anamorphic, without vignetting.

I love the look of anamorphic shooting, and the LA7200 I am sure can be shoehorned into the right combination of camera / lens for Iscorama rivalling results. The LA7200 is known to be capable of some of the best horizontal anamorphic lens flares, which is a bonus.