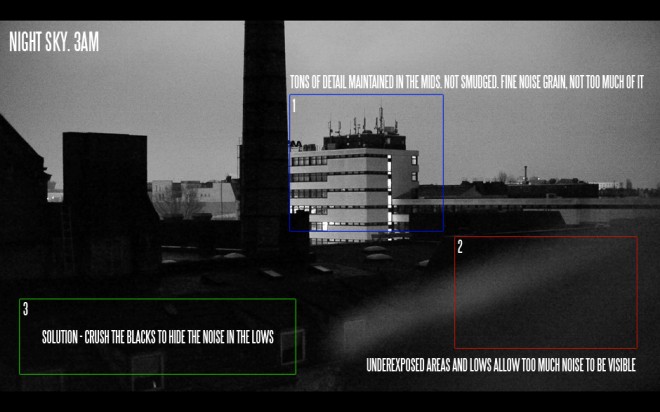 The GH2 is the best low light DSLR. It is a myth it cannot compete with the FS100 or Canon C300. I am currently experimenting a lot with my GH2 and Nikon J1. I’ve seen some new opportunities with these… With the GH2 I am refunding my techniques for getting cinematic extreme low light at ISO 12,800 and F0.95. Due to the way CMOS sensors behave you are actually able to get a very film like ISO 800 grain over well exposed areas of an image and such is the F0.95 aperture on the Voigtlander Nokton and the high ISO, it is very easy to get an exposure in the dimmest of light. The noise is hideous in the lows and red / blue chroma channels, but you crush that noise out with a high contrast black and white picture profile and it solves the issue.

With the Nikon it is about having a ‘super crop mode’ camera for 16mm c-mount lenses that would vignette on the GH2. Even my SLR Magic 11mm F1.4 does not vignette completely on the J1 so it behaves like a super fast 28mm wide angle with manageable DOF. You hardly even need to *think* about focussing it when your subject is more than a few metres away. All very easy compared to the 5D Mark II.

I recommend this c-mount adapter made in Europe

, Poland for the J1 / V1. It is far heavier duty than the Chinese adapters. It is made by Ceicio7 who also produces the LOMO OCT 18 / 19 adapters.

The Nikon is far better in low light than the Ex-Tele crop mode on the GH2 (noise is magnified at 1:1 without scaling from 18MP), with a clean image at ISO 1600 and a less severe crop at 2.7x.

The advantages of the smaller sensor come into their own when you are trying to focus at a fast aperture in low light. On the 5D Mark II it would be too shallow to track a moving actor especially close up. On the J1 it is very film-like. It is also good for doing low light work when you want the background to be blurred but still recognisable and not completely just one shade of grey like it would be with the lens wide open on a full frame camera.

I really do prefer the GH2 and J1 for video over the 5D Mark II, but the stills on the 5D Mark II are mind-blowing. RAW files are much better at high ISOs than on the GH2 and J1 so I still use it for photography in preparation for a shoot or when I need a shot with a shallow depth of field at 24mm wide angle.

I love this look, it is like an old black and white movie captured without all the artificial light they had to reproduce on set with film at low ISOs. The grain structure is really fine and just like film. More of an issue is the fixed pattern noise of the sensor which shows up on the lows. So you need to crush the lows down and have quite a steep ramp up from black to middle grey. You are basically painting a high contrast picture with lots of mids and a few highlights but it looks beautiful in my opinion.

Here’s an example of where the CMOS in the GH2 does well and where it craps out and you need to adjust the picture profile to help it out. 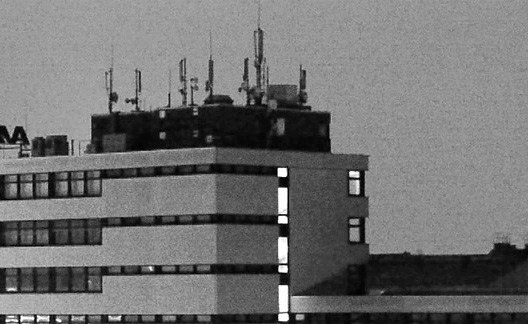 It isn’t graded, straight out of the camera. This area of the image is well exposed (even though it is the dead of night). I am using an F0.95 aperture and ISO 12,800. There’s plenty of fine detail, fine noise, nothing is smudged as you’d think it would be at that ISO level. Noise reduction (NR) in-camera doesn’t make much difference either way but I’ve turned it down to -2. I am using the Dynamic Black and White film mode.

On underexposed areas of the frame, noise is far more noticeable due to the nature of CMOS technology. Here you need to crush the blacks. The first image below shows you the full extent of the fixed pattern noise visible you try and boost the lows in post… 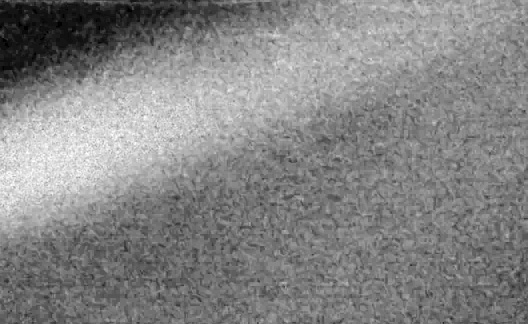 So instead, crush these lows and it hides the noise. 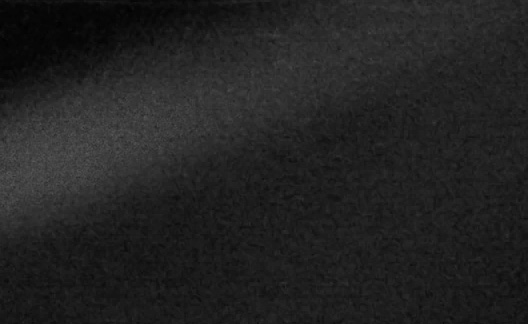 This is crushed to the level of exposure your own eyes would make out, so it still looks pretty damned cinematic and not too extreme. The overall frame looks far better like this and in motion (rather than in static crops as shown here) the noise looks far better again since it fizzes making it appear finer than it actually is.

I find that the other kind of noise – the fixed pattern noise – almost pulsates over the lows as the voltage varies through the CMOS chip, so this is another reason why it is so important to sweep it under the rug!

For monitoring your picture profile changes it is very important NOT to trust the live view display. Get a decent monitor like the Zacuto EVF and hit record. This is the only representative image you will get. The live view display is underexposed by over 1 stop when it isn’t recording!

I’ve tried getting similar results on the 5D Mark II at ISO 6400 and you can get a similar result on that camera by taking the same approach to picture profiles. You can’t get ISO 12,800, or quite the same fine noise grain – it is more blotchy on the 5D Mark II because of the scaling and line skipping – and you cannot get an F0.95 aperture without unmanageable focus and digging up a very rare lens at considerable cost – but it does have nice tonality to it. 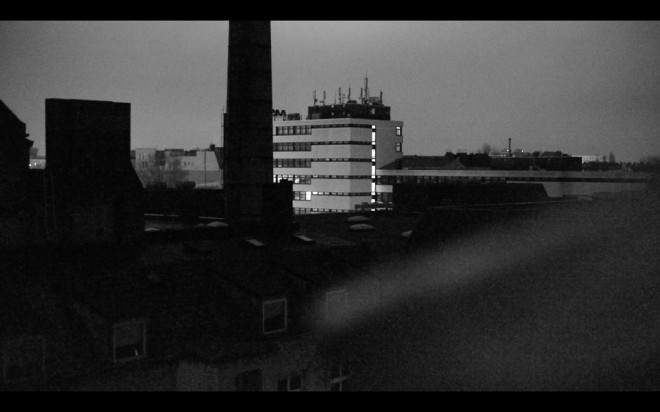 Click the frame above to get a larger view

One thing I did find with the 5D Mark II is that if you are modifying a colour image to black and white in post, don’t just reduce saturation on all channels. You need to handle the red channel separately and actually I had to resort to Photoshop for the above frame and change the influence both reds and yellows were having on the image, because that seems to be where the vast majority of noise is in the 5D’s image. It looked awful just applying a standard de-saturate filter to it.

Forget about it, is my advice. If you are one of those who look at a black and white cinematic masterpiece and think it could do with a splash of Technicolor, then this technique probably isn’t for you! If you enjoy the beautiful of black and white however, as I do, then it works a treat. The thing with colour is that the red channel tends to be very noisy on a DSLR. More of the bayer CMOS sensor is given over to the green wavelength of light, so as a volume of surface area the red and blue channels are noisier. Green is where most of the resolution is so that is fine for a black and white image, but to produce a colour one you also need a clean red and blue channel, and that just isn’t possible at ISO 12,800.