A Drop In The Ocean:

Kendy Ty shoots with a Canon 550D / T2i and Sigma 30mm F1.4 (old version). The results are staggering considering the ‘low-fi’ performance of the gear. If ever there was a spur to get out and shoot something, this is it…

The T2i I would dismiss out of hand usually for being dated, moire ridden, aliasing all over the place, soft and rather dated considering what we have at our disposal today with cameras like the Panasonic GH4.

However it is back all guns blazing here, which has really taken me aback!

Kendy has managed to cook up some kind of magic here. Yes it is still a low-fi feel but the thing is it works. It goes brilliantly with Kendy’s content, which is absolutely the star here. Moving stories, great acting, great sound… emotionally involving characters.

However before you can splutter that old cliche ‘content is king!!’ consider that the visuals and 550D look pretty amazing themselves here!! Very cinematic and Alexa-like.

What I think Kendy’s work also shows is the important of obfuscation… hiding more than you show. Giving quick glimpses of things and then just as you spark your audience’s interest, pulling the shot away from them, leaving them wanting more.

Here the magic-breaking flaws of the T2i are dodged around brilliantly. Many of Kendy’s shots are close-ups or medium-close-ups and here the softness is actually flattering for faces and skin, whilst avoiding the kind of moire and aliasing issues and lack of detail which can break a wide angle shot at infinity focus.

This is actually a bit of underrated lens, it’s pretty sharp in the centre especially at F2.0 just stopped down a little, and the chromatic aberration gives the images a slightly ‘alive’ feel so sometimes flaws can work in your favour. I went out today inspired by Kendy and found an old battered copy of the lens for just 189 euros in Berlin. It is lovely for stills on my Nikon D7100 and later I tried it for a few shots while shooting a few scenes of my Bunny Suit music video during their recording session. 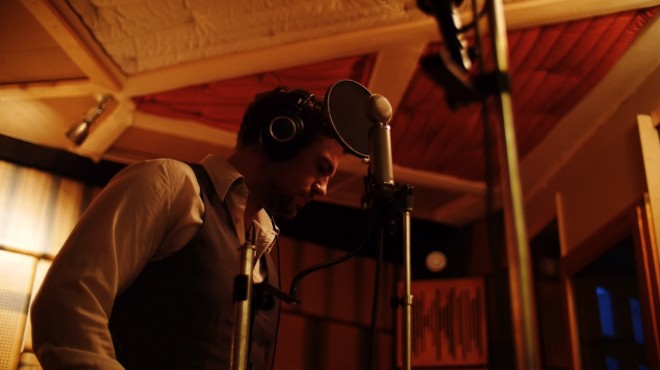 Here it is in 1080p on the GX7 with BMCC Speed Booster, which makes for a rather large 1.28x crop, larger than 1.5x crop APS-C which is what the lens is designed for. This gives you a gentle vignette towards the edges, but it never quite goes completely dark in the corners. The look is pretty nice and the field of view in full frame terms works out being 38mm – a good general purpose focal length in-between wide angle and portrait, thus capable of doing both in a moderate way, not too extreme. It’s a versatile little combo and I can’t wait to use it on my GH4.

I have the far superior Sigma 35mm F1.4 ART so you may wonder why I am bothering with the rubbish old one! Well it’s an experiment… I want to see if certain lenses have a low-fi character that can soften the hyper sharp image in 4K on the GH4 and make it more organic. 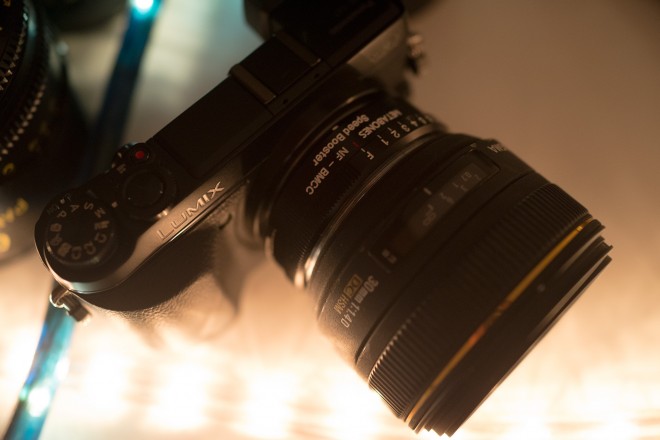 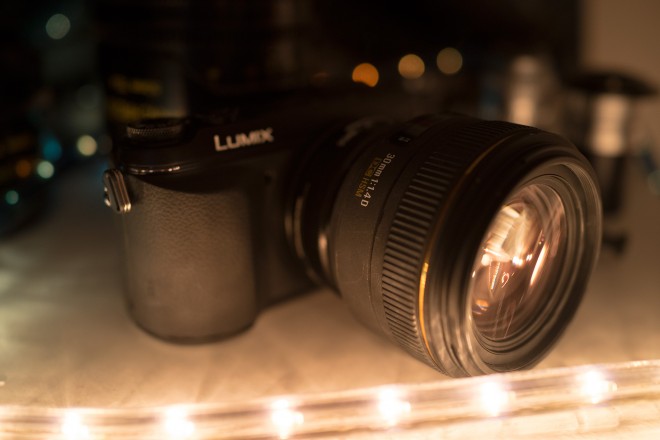 Here’s what Kendy said on Vimeo about his short Behind The Move:

The whole film [Behind The Move] was done over 3 days, post production included. I used my small Canon 550D, everything is natural, no additional lights. I think it is much more atmospheric. I don’t like it when you can see everything clearly on screen because it looks fake. I like the idea of showing just the shapes or the shadows of the characters like in a comic book. I wanted something organic so I added some clean 35mm grains to my footage, because I like the visual render of the old cameras such as the Bolex. For the strange flares effects, I use a broken glass in front of my lens and shot with only one hand. It’s easy with a small camera like the 550D, but could be a pain with an Alexa because of the weight. Because I make everything with After Effects (including the edit) I work very fast. I don’t waste my time by switching between several softwares or video tools.

All I can say is… talented guy! Like I said on the EOSHD forum when Kendy’s work was brought to my attention, the 99,000 plays of Behind The Move are there because of his sensitivity for a bunch of stuff… not just ‘low-fi’ camera aesthetics but the sensitivity in handling audio, music, mood and the content itself including the amazing girl, moving story and in the end ALL of this matters and you can’t point to one thing that ‘makes’ it aside from perhaps the director himself and his vision, his mind’s eye.

So should we throw away out expensive tools, lenses, high performance 4K cameras and all go ‘low-fi’? No!

Behind The Move in terms of content suits low-fi visuals, the 550D and that one Sigma lens was all he needed to bring it to life. The muted, depressed look is perfect for his subject matter… the isolation, loneliness and overwork of the dancer, being stretched to the limit in many different directions in a big sprawling city miles away from her family home in France. But what about when the camera and lens aesthetic does not suit the content? If the film was longer and we followed her back home and there was a loving embrace with her mum or something… maybe you’d not want the same look for that scene. I often want epic scenery, anamorphic composition, striking detail and lush colour for locked-down tripod shots. The 550D would be hopeless here. Sometimes I may want raw handheld camera-work, even black & white, a grungy low contrast low resolution feel, not something hyper revealing and yes the 550D would do it. Yet I feel that the 550d and Sigma 30mm F1.4 is only suited to one aspect of a look, so why not start off with as high a quality image as you can get your hands on and rough it up? The glass in front of the lens in some shots in Kendy’s movie is an example of that. Making stuff look less clean, less ‘real’, more magical and otherworldly.

This is what a camera like the GH4 will really benefit from in my view.

Being such a sharp 4K camera I’m not sure how much it really benefits from extremely sharp and hyper revealing lenses like the Panasonic 12-35mm F2.8 for all kinds of film work. Rather we want some smoke and mirrors…

Consider when you want the sharpness and when you don’t. Is it helpful for skin tones and faces? Also the distortion you get from some anamorphic lenses can be quite attractive. A fast aperture like F1.2 helps make bokeh look more varied and less uniform.

It is definitely worth investing in a good variable ND filter to avoid having to lose motion blur and shooting at high shutter speeds for the correct exposure in bright light. I strongly recommend the Heliopan slim variable-ND, not only is the glass superb I find the hard stops on the ring absolutely invaluable for consistency of exposure from shot to shot and speed of use.

Grading is also a key area where, which if mishandled could lend everything a very harsh video look.

Do you want to maintain true black and super-white or do you want a more muted look to highlights and lower contrast shadows like in Kendy’s grade? Be sure to give his custom Canon picture profile a try. This works on a range of cameras like the 5D, 7D, even the C300 and C500 and is only 9 euros.

I still believe that technology needs to keep improving and the shooter needs to stay on top of it. I’m a big supporter of 4K. But Kendy Ty just gave me a lot of pause for thought… a reminder to put down the toys and GET SHOOTING.