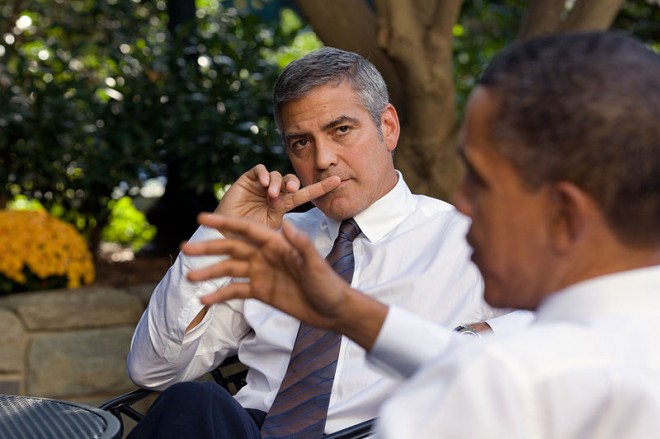 George Clooney is a canny operator. The director and actor has launched a tirade at the hedge fund manager Daniel Loeb, now a major stakeholder in Sony, who is campaigning to have the profitable Sony movie business partially sold off.

Clooney says it is becoming more and more difficult to get films like Argo green-lit – echoing the concerns of other top talent in Hollywood.

First some background on this story – Daniel Loeb recently slammed Sony’s summer season as a failure, citing underperformance at the box office by After Earth (shot on the Sony F65) and White House Down (exactly the kind of tent-pole films Loeb is encouraging Sony to put out). “Responsible for these debacles” claims Loeb are Sony Pictures own CEOs, Amy Pascal and Michael Lynton, both established long serving experts in the film industry.

Loeb’s hedge fund Third Point is a major investor in Sony, with 70 million shares worth around $1.4 billion. As a result he has weight in all of Sony’s decisions from DSLRs to the entertainment division. Sadly money talks.

Recently Loeb said Sony’s own president Kazuo Hirai’s decision was “perplexing” in allowing Sony Pictures CEOs free reign on the movie business. The investor also has concerns about “what is in the pipeline” at the studio (part of which is Clooney’s own upcoming The Monuments Men about a race to save pieces of art from destruction by Nazis and Hitler), describing the studio’s future output as “bleak, despite overspending on numerous projects”. (Clooney’s own shoot came in $5 million under budget and is now in post production).

“I’ve been reading a lot about Daniel Loeb, a hedge fund guy who describes himself as an activist but who knows nothing about our business, and he is looking to take scalps at Sony because two movies in a row underperformed? When does the clock stop and start for him at Sony? Why didn’t he include Skyfall, the 007 movie that grossed a billion dollars, or Zero Dark Thirty or Django Unchained? And what about the rest of a year that includes Elysium, Captain Phillips, American Hustle and The Monuments Men? You can’t cherry pick a small time period and point to two films that didn’t do great. It makes me crazy.”

“Fortunately, this business is run by people who understand that the movie business ebbs and flows and the good news is they are ignoring his calls to spin off the entertainment assets. How any hedge fund guy can call for responsibility is beyond me, because if you look at those guys, there is no conscience at work. It is a business that is only about creating wealth, where when they fail, they get bailed out and where nobody gets fired. A guy from a hedge fund entity is the single least qualified person to be making these kinds of judgments, and he is dangerous to our industry.”

“He calls himself an activist investor, and I would call him a carpetbagger, and one who is trying to spread a climate of fear that pushes studios to want to make only tent poles. Films like Michael Clayton, Out of Sight, Good Night, And Good Luck, The Descendants and O, Brother Where Art Though?, none of these are movies studios are inclined to make. What he’s doing is scaring studios and pushing them to make decisions from a place of fear. Why is he buying stock like crazy if he’s so down on things?”

“He’s trying to manipulate the market. I am no apologist for the studios, but these people know what they are doing. If you look at the industry track record, this business has made a lot of money. It creates a lot of jobs and is still one of the largest exporters in the world. To have this guy portraying it that Sony management is the bad stepchild and doesn’t know what it is doing and he’s going to fix it? That is like Walmart saying, let me fix your town, putting in their store, strangling all the small shops and getting everyone who worked in them to work for minimum wage with no health insurance.”

“It’s crazy he has weight in this conversation at all. If guys like this are given any weight because they’ve bought stock and suddenly feel they can tell us how to do our business — one he knows nothing about — this does great damage then trickles down. The board of directors starts saying, ‘Wait a minute. What guarantee do you have that this movie makes money?’ Well, there are no guarantees, but if you average out the films Will Smith and Channing Tatum have made, you will take that bet every time, even if sometimes it just doesn’t work out.”

*Carpetbagger = opportunism and exploitation by an outsider.

With a 7% stake in Sony, Loeb is aiming for a place on Sony’s board and argues a partial sell off of the entertainment business worth $10 billion could raise as much as $2 billion, capital Loeb says would help the business make acquisitions and seize other opportunities, not least increasing his own personal profit without Loeb personally doing any constructive work in the movie industry AT ALL.

Clooney claims that if the Loeb had his way “You will see a lot of crap coming out”.

“Hedge fund guys do not create jobs, and we do. On the movie we just made, we put 300 people to work every day. I’m talking about nice, regular people, and when we shot in a town, we’d put another 300 people to work. This is an industry that thrives; there are thousands of workers who make films. You want to see what happens if outside forces start to scare the industry and studios just make tent poles out of fear? You will see a lot of crap coming out.”

Speaking out like this is brave, so congratulations to George for putting his neck on the firing line and for getting to the crux of one of the biggest problem affecting cinema today.

The fight to save movie industry from the carpetbaggers starts NOW.