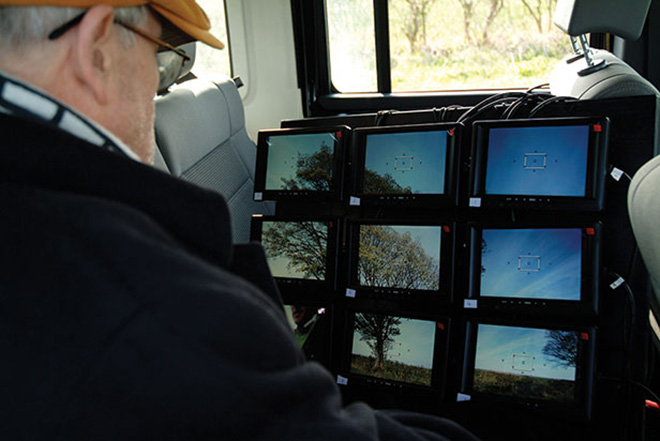 Above: artist David Hockney at his DSLR video bank

The work is for Hockney’s new exhibition currently open at the Royal Academy in London. Similar to his photography and painting – the video piece is a large montage of 18 canvas-like video displays, showing DSLR footage shot by the artist in Yorkshire, England.

In this interview Ted Chau talks to EOSHD about the project and Hockney’s use of DSLRs. 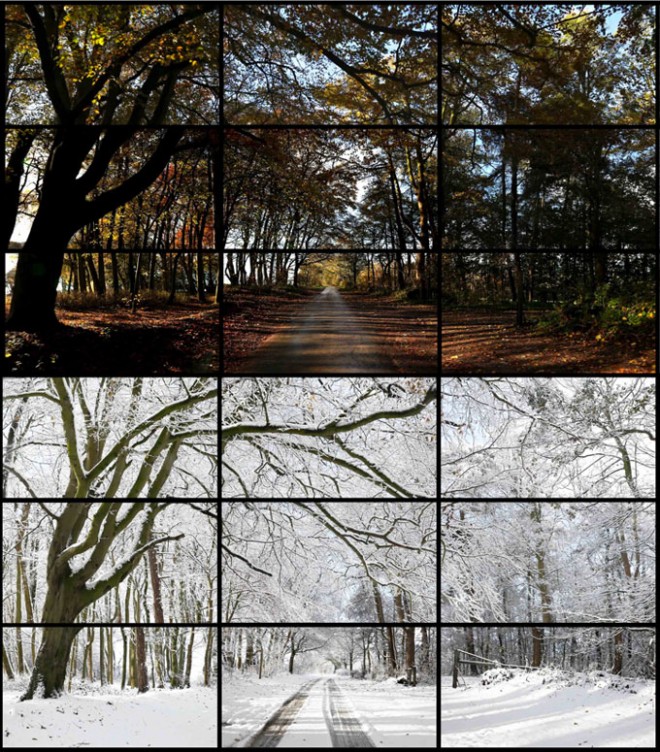 EOSHD: How did your involvement with Hockney begin?

Ted: My company Chaudigital has been supplying fine art printing solutions to David Hockney Studio for about 6 years; large format pigment ink printers, reference monitors, colour management, archival papers and then started including other tech, like Wacom screens/tablets, digital cameras and what have you.

EOSHD: How did the project evolve?

Ted: DH started out using Sony Cybershot T900’s, which resulted in endless hours of converting to ProRes for editing in FCP. Eventually the wish to steer clear of AVCHD format and interlacing led to 9 5D Mk2’s shooting 1080p. A 3×3 rig was constructed to mount the cameras on the bonnet of a vehicle, while HDMI cables were run into the cab and attached to a 3×3 array of small monitors. The first version of which I hacked onto a sheet of painted mdf and was pretty utilitarian, ie. ugly! He then wanted a second array which I had fabricated out of anodised aluminium and looks good enough to hang on a wall. DH rides shotgun with the monitors and directs the camera positioning and so on. The RA show display uses 18 NEC 55″ 1080p LCD screens, while the content is fed from Mac Pros. For the real-time piece in the show featuring Wayne Sleep and members of the Royal Ballet, another 9 5D2’s were used to create the 18 screen final.

EOSHD: Was the footage colour graded and did Hockney have a hand in that himself?

Ted: David has a technical assistant – Jonathan Wilkinson, who handles that side of things while DH directs. DH, as far as painting goes, works without assistants, every brush stroke being his own, while with his video work he ingests the capabilities and limitations of the latest tech and re-imagines its use with the aid of technicians. The footage on show at the Royal Academy exhibition is straight from camera and edited with timing changes so not all the screens run at the same speed. The director/team approach to working with moving image is pretty normal as we know, and for someone who works primarily in another medium, this is pretty understandable.

EOSHD: Do you know if the video work influenced or fed into his painting work, and what was Hockney’s intention behind the use of video? Was resolution an important factor?

Ted: My impression, drawn from conversations and his previous work, is that his use of multiple canvasses and photo/film montages influenced his latest video pieces, which all share the fragmented way of constructing a view, expressing how we take in a scene at first glance and then our gaze roams and fixes on different areas and objects. The initial impact of seeing the work during early editing was startling because of the simplicity of the idea when realised in front of you; the images naturally remain detailed when you move closer to the screens, and you choose which part of the scene draws your attention, as in real life. The use of HD in this way is very immerse. 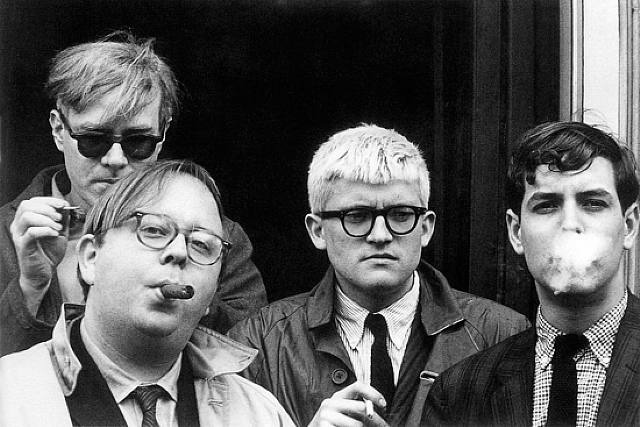 Above: a young David Hockney, photo by Walter Logeman

EOSHD: Did you offer advice on iPad apps? It seems a perfect continuation of his early fax drawings.

Ted: After supplying iPads to DH immediately after release, he settled on Brushes as his app of choice. I also spent some time liaising with one or two app makers with a view to developing something similar to Brushes with his own ideas added. This has yet to lead to anything concrete. They recently spoke to the author of Brushes while in LA about possible development, but again has yet to happen. We also supplied lots of JustMobile AluPens (has a dozen), the Wacom Stylus and the Zen Brush. During last years Paris iPad/iPhone drawings exhibition, DH was continually uploading new works to the show server, so people revisiting would see fresh pieces. Good use of tech.

EOSHD: Hockney has a grand scale to his landscapes on canvas, and now his video work is on a huge scale as well. What were the technical challenges in rigging, recording and editing?

Ted: I mentioned earlier about the rigging on the car, the rendering of many files needed lots of grunt and at least one Mac Pro died in the process, logic board and cpu’s burnt out. Another consideration was finding a way to play back 9 synced MOV files after editing. We set up a 3×3 array of NEC 30″ lcd screens to play back edits and because Macs don’t play nice with Blu Ray, which anyway would have taken even longer to author 9 BD discs every time to see work, we used 9 1080p media players with hard drives to drag and drop files onto. 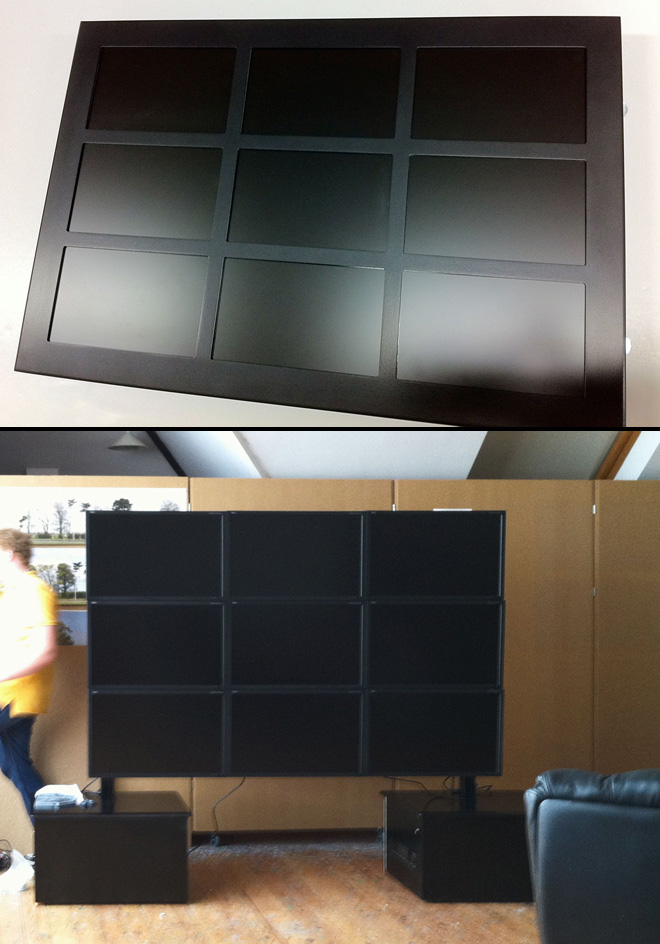 The final show is streamed from Mac Pro’s using a software system designed to feed large advertising displays, as the small media players used in production were not robust enough to trust with the show.

He may be 74 but his mind is as sharp as a blade and rightly considered one of the living masters, I believe part of his genius lies in his tireless work ethic; He is quoted as saying “Inspiration – she never visits the lazy” which is quite inspiring, it’s a privilege to know the man.

EOSHD: Are you working on any other projects with filmmakers or artists?

Ted: As well as supplying solutions, our more regular service and what we are known for is fine art print making for exhibition and edition sales, including scanning and retouching/grading. Some links to people and shows we were recently involved with:

EOSHD: A big thank you for the interview. I will keep in touch and keep tabs on what Mike Figgis (Leaving Las Vegas, Internal Affairs) is up to. I know he’s been tweeting about shooting and editing with the Canon 7D recently!