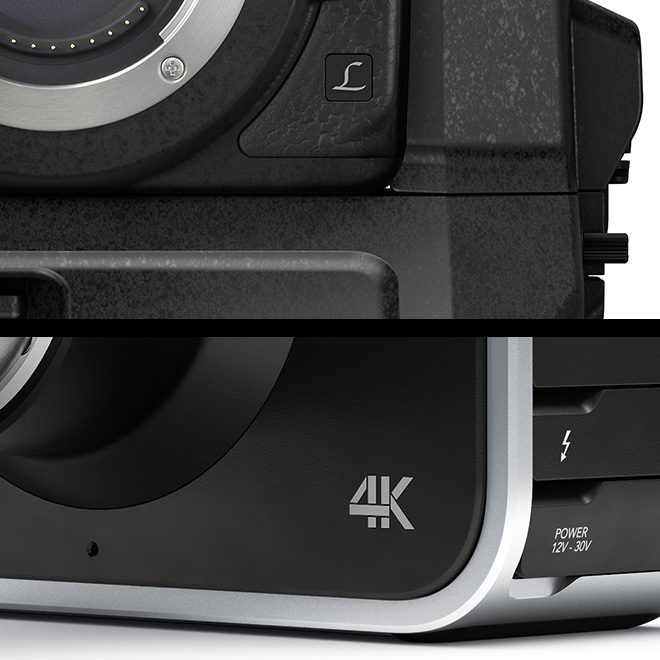 Be sure to always put your needs and the needs of your specific shoot ahead of the outright spec sheet.

For example – do you need what raw video offers or not? Do you plan to do a lot of VFX and keying work which benefits from 4:2:2 colour sampling? How about the global shutter – do you have a lot of flash-bulb photography in the scene or a fast moving train going quickly through the frame at close proximity? If so then a global shutter hold bigger advantages for you than they would do otherwise.

If you’re shooting calm zen-like narrative scenes in low light, obviously the superior low light performance of the GH4 is going to be an advantage and the rolling shutter won’t pose any issues at all. The rolling shutter on the GH4 is 50% quicker than before so in league with a proper cinema camera like the Canon C500 rather than a DSLR but – as an example – no matter how fast a rolling shutter is, it can’t capture lightning properly. If you’re trying to capture lightning strikes, a global shutter will avoid banding and capture the full strike from the top of the sky to the horizon.

Another consideration is rigging. If you have a MoVi-like stabiliser or plan to do aerial shoots using a drone, the GH4 is currently the lightest interchangeable lens 4K camera in the world, smaller and much lighter even than the Canon 1D C. The Blackmagic 4K camera plus external battery is around 3x the weight of the GH4’s body and much larger.

Onboard audio recording is also a strong point of the GH4 compared to the Blackmagic Production Camera, especially if paired with the XLR add-on.

Using the cinema standard for sensor size rather than photographic full frame, the GH4 works out as a 1.5x crop over Super 35mm, increasing to 1.7x crop in 4K mode but decreasing to just 1.2x with the Metabones Speed Booster.

The Blackmagic Production Camera is a 1.0x crop as it has a Super 35mm sensor.

For those used to thinking in full frame terms (as I am) this is a 1.5x crop compared to the 5D Mark III like APS-C. However since both cameras are going to be used for cinematography here, we shouldn’t use that as the standard. It’s a bit like saying the 5D Mark III is a crop camera and medium format the 1.0x!

Sensor size and your choice of lens is indelibly linked – an important thing to consider therefore is the mount. The active EF mount on the Blackmagic is an advantage for users of Canon lenses while the GH4’s mirrorless mount is an advantage for everything else, and I mean literally everything! You can easily use PL mount cinema lenses on the GH4 with an adapter. Both cameras are capable of a very shallow depth of field but with 4K focus requires you to have a deeper depth of field to avoid slight focus errors becoming very visible at the higher resolution. Here the slightly smaller sensor on the GH4 actually has an advantage. 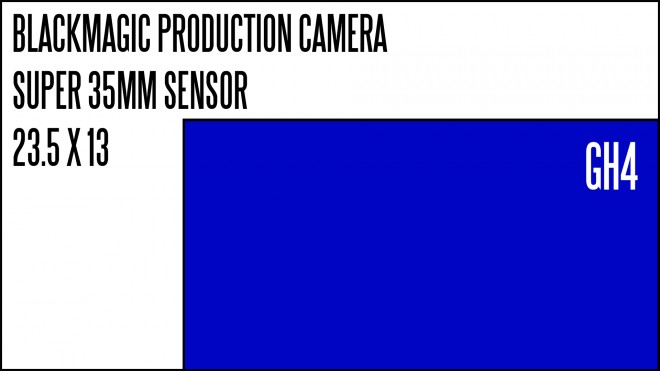 Dynamic range looks close to 12 stops on both cameras (1 stop less than the 2.5K shooting Blackmagic Cinema Camera). The codec on the GH4 will bake the dynamic range into the shot as per in-camera picture controls and this cannot be adjusted by any large degree in post. The Blackmagic Production Camera will give you the raw sensor data to handle how you please later.

4K raw on the Blackmagic Production Camera will give you the ability to make smoother changes to the exposure curve in post but only as long as you don’t reach the limits of the 12 stops. If a shadow is so dark it falls outside the 12 stops of dynamic range, raw won’t bring it back. Something else to consider is that the Blackmagic’s sensor is noisier in the shadows, which limits how much of that dynamic range you can actually use in post without it looking crap. If you’re lifting dark shadows by 2 stops because you exposed for a bright window for example, the Production Camera Footage is not going to hold up that well, raw or not.

Essentially with the GH4 you are grading using the in-camera picture profiles and on the Blackmagic you can grade to just as large a degree in post. But there’s also a difference in outright performance and image quality with regards to colour. 10bit colour depth on the Blackmagic Production Camera does give smoother colour gradients where there’s a gradual transition from one shade to another. 4:2:2 as well helps avoid aliasing and stair-stepping on bright red, blue or green edges. Green foliage and rich blue skies will likely look better on the Production Camera.

10bit colour and 4:2:2 sampling are great features the Blackmagic offers internally and the GH4 needs an external recorder for.

GH4 4:2:0 can cause a bit of moire and pixilation if you look closely at the 4K footage.

However on the early Blackmagic 4K footage there is some aliasing visible there too, just in different parts of the image.

In terms of colour correction and grading it’s a big win for the Blackmagic and the superb software it comes bundled with, Resolve 10. You can’t beat raw Cinema DNG for flexibility in post. ProRes too – very nice. The GH4’s 4K output looks great but the look is baked in. You will need to get your exposure and ISO right at the time of shooting and also the white balance. You will need to figure out which picture profile suits the look you’re going for, and which one plays best with Film Convert if you’re using that to grade with.

That said the Blackmagic Production Camera’s raw is not an excuse for sloppy exposure or shooting. 4K simply doesn’t reward a sloppy shooter. It punishes even the tiniest errors. You will have to take care with either camera to get it right on the day. Especially when it comes to focus, if your intended focus plane is even just slightly off the error will be very noticeable.

Here a clear advantage to the GH4 because the global shutter circuitry on the Blackmagic Production Camera takes up room on the sensor otherwise used for capturing light. The GH4 goes up to ISO 6400 in 4K and the Blackmagic has a native ISO of around only 400. The image is quite clean at ISO 400 so it can be lifted by the image processor and gained up in post from the raw image data to around ISO 800 before it starts to become too noisy at around ISO 1600. I’m expecting a 2 stop advantage here for the GH4.

The Blackmagic is certainly the heavier of the two, especially when you add the external battery necessary for practical shooting. The camera is taller and wider, which gives it a higher centre of gravity. The GH4 is much smaller and lighter, so for drones and aerial shoots it’s the better choice. The Blackmagic has a simplicity of operation which is quite admirable – very good touch screen design – but I it’s not a great handheld form factor. It lacks a built in EVF and grip so these are other additions you may need. The screen on the Blackmagic is larger but of lower quality in terms of contrast, colour and resolution. The GH4 has an OLED panel which can be angled when the camera is on a tripod to save your back. The Blackmagic’s screen is angled upwards slightly but this cannot be adjusted. The screen is mainly a control interface and it’s designed to be used with an external monitor. 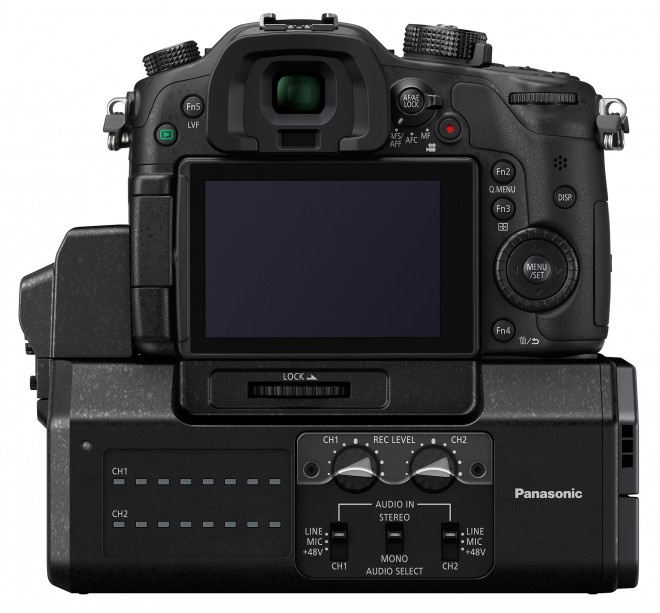 Sorry but the fact is the Blackmagic really does suck when it comes to audio. The quality of the internal audio circuits is dismal and there’s not even any way to monitor it using on-screen levels. The GH4 only has a basic 3.5mm mic jack and headphone jack but you have the option to add 2 proper balanced XLR jacks with phantom power via the external add-on. It also has on-screen audio meters on the LCD and physical gain control dials (on the XLR add-on).

The reason 4:2:2 is left out of the compressed internal recording on the GH4, is to maintain manageable file sizes in 4K and 1080p.

The GH4 also has a lower overall bitrate at 100Mbit compared to around 250Mbit on the Blackmagic Production Camera in ProRes. Raw on the Blackmagic is compressed 2:1 but the file sizes are still humongous. I’ve shot uncompressed raw for around a year now and it’s not so much the added expense of storage space that bothers me (prices have come so low) but how to organise all the damn data. Having so much data spread across so many hard drives is a bit of a headache. You can of course delete the raw files and keep the compressed versions or ProRes. In practice I find it very hard to delete the master files. It just doesn’t feel “right”, especially if it was an artistic endeavour. It’s a bit like photocopying your painting and throwing away the original.

The internet tends to polarise our arguments and unique, specific uses of a camera get buried under the headlines. The message here is clear – both cameras offer a great deal to filmmakers, whether it’s the flexibility of a raw workflow and great software like Resolve 10, global shutter’s ability to capture extremely fast movement as the eye sees it, or the GH4’s amazing all-round feature-set and convenience factor.

Price wise the Blackmagic is expected to be launched at around 3700 euros and $3995. That’s considerably more than the mooted launch price of under $1999 for the GH4. Add to the Blackmagic your SSD drives to store all that raw and ProRes, plus external battery and articulated EVF or monitor and you have a much more expensive piece of kit.

The GH4 has a lower point to entry but to get 10bit 4:2:2 and ProRes from an uncompressed 4K feed you will need the add-on box. This will put the camera in the same price bracket as the Blackmagic Production Camera and ideally require the same outlay on SSDs and monitors. At least you get two tasty XLR inputs thrown into the bargain and a full sized HDMI port.

Overall the GH4 is the most appealing for me, but your needs may differ and GH4 users without an external recorder may look on jealously towards the 10bit colour of the Blackmagic camera come the shipping date.