If I were stuck on a desert island with only one lens, I’d choose the $20 Helios 44M-2 and anamorphic adapter. OK that is technically two lenses but I’d fire all my other lenses at a brick wall at 200mph if it meant keeping hold of the Isco CentaVision 2x anamorphic.

The next Superman film will be shot with anamorphic lenses (Man Of Steel – Trailer) and the result is art-house filmmaking meets Dark Knight Rises. Beautiful stuff, and poetic.

The look has even recently reached mainstream music video production with directors using a 2x anamorphic on a 16:9 digital cinema camera, producing the extremely wide 3.55:1 you see in my video above. Recently Justin Bieber and Rihanna, have had music videos shot in the format. But don’t let that put you off. Then there is a certain perfume ad (below) BUT it is incredibly beautiful. Wonderful camerawork, lighting and a great presence from Elle Fanning. The camera was the Arri Alexa and the anamorphic unknown – but it looks pretty wide to me. Possibly a Panavision G Series 25mm T2.6 or Hawk C series 25mm.

The Isco anamorphic lenses all prefer their mating partners to be a bit simple. The Helios 44M-2 is a 58mm F2.0 with hardly any coating and the sort of lens you find at a flea market every Sunday. But aside from my Leica R 50mm F2.0 which does go well with anamorphic, I’ve always had the best results from cheap stuff. The video above was shot with the Helios and Asahi Pentax 55mm F1.8, both in M42 mount.

The lens mount is pretty strong on the Blackmagic, I didn’t require any rails for support. However I don’t think I’ll be shooting with a lens-heavy setup on the quick release plate of the Switronix PB70 battery again because with a heavier setup it isn’t very stable. Great battery but I’m going to mount it differently next time. I’m shooting with the ReWo Blackmagic Cinema Cage and wooden handles at the moment, a review of which I’m doing for the blog in due course. 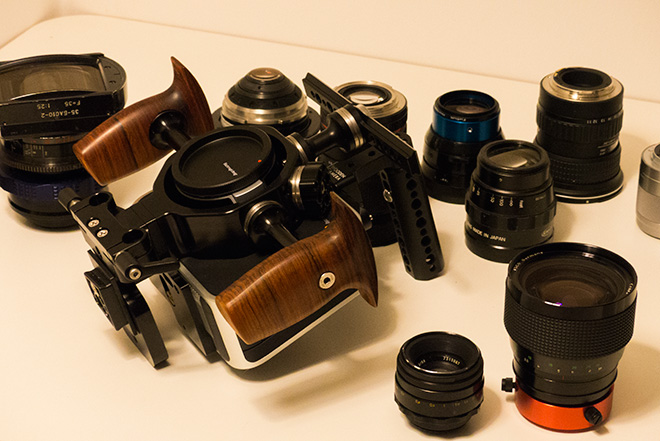 So the Helios is about as cheap as they come but looks far better than a bling Zeiss or Canon. More flare, more dreaminess and actually a sharper image at fast apertures. You’d have thought the sharper the prime, the sharper the anamorphic image but it doesn’t work like that.

Most of the video was shot with the Blackmagic Cinema Camera at ISO 800 (native), something of a lift in post on some shots to ISO 1600 and the lens wide open at F2. As you can see the camera is just fine in low light. Not as silky smooth as the Alexa, no, but definitely in the same league for a cinematic 12bit 2.5K raw image. 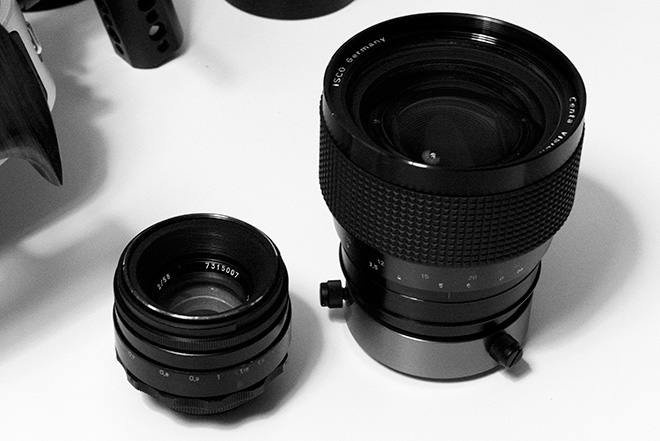 . It is aluminium with non-metal poly-something-or-other clamping screws so they don’t slip or scratch the anamorphic casing.

This attaches to the prime lens via a 52mm filter thread (and 49-52mm stepping ring in the case of the Helios 44M).

This Isco CentaVision is probably only one of around 5 in the world, a unique hybrid of Kowa glass and Iscorama 42 housing and yet I trust the clamp with it. I’ve had no issues whatsoever with it coming loose. The latest Red Stan clamps also have a screw thread for the anamorphic for double security, but the Iscorama version will not fit this lens or the Iscorama 42. There’s also a larger 72mm clamp from VidAtlantic which I recommend also on eBay, here.

The CentaVision has a recessed 62mm thread on the back and the clamp needs to be big enough to fit. The Iscorama 36 has a smaller 49mm thread and smaller rear element. So if you are buying a clamp make sure you get the right one for your anamorphic, be it a Kowa, Isco, or something else altogether. 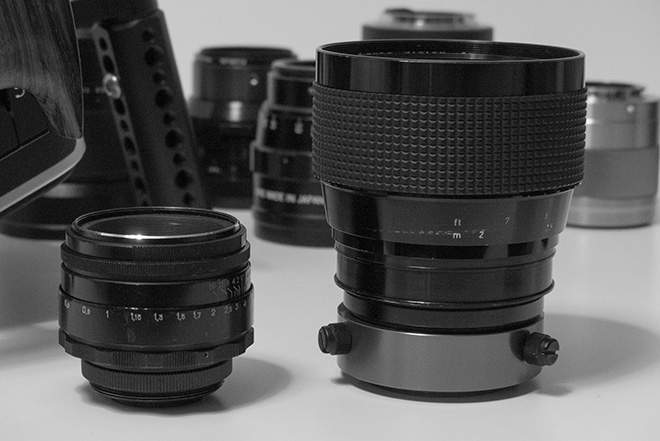 In actual fact the Kowa Prominar 8Z / 16H which is only around $400 is optically as good as the Isco CentaVision if not actually sharper at very fast apertures and with less vignetting. The tragedy is, the focus is dual-ring on the Kowa which makes shot set-up a real pain in the ass and racking focus completely impractical, which is why it fetches $400 and not $3000 like an Iscorama.

What I would love to see on a future Blackmagic Cinema Camera update (firmware if possible) is 4:3 support. The sensor is actually a 4:3 chip but they are only reading off a letterbox 16:9 from it. If the data processing side cannot handle the extra vertical resolution or if it makes the rolling shutter a lot worse then there’s a workaround solution Blackmagic should easily be able to do in firmware for anamorphic shooting. Remember, anamorphic is not an indie thing it is a professional method employed on a ton of high profile productions and a 4:3 mode would give Blackmagic huge kudos in the professional filmmaking market so they should do it! 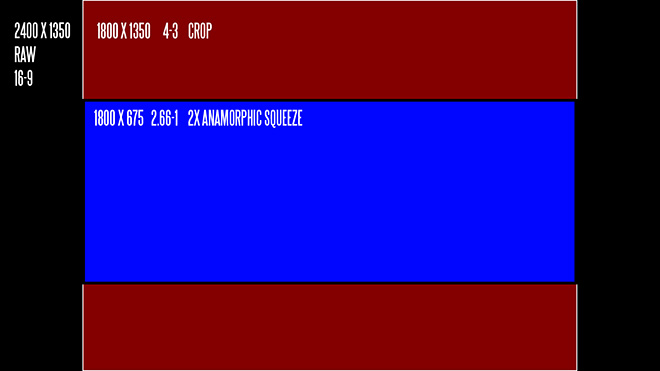 As you can see the solution is simply to record a 1800 x 1350 4:3 box (in red above) which when squeezed in post allows you to get a more standard aspect ratio from a 2x anamorphic.