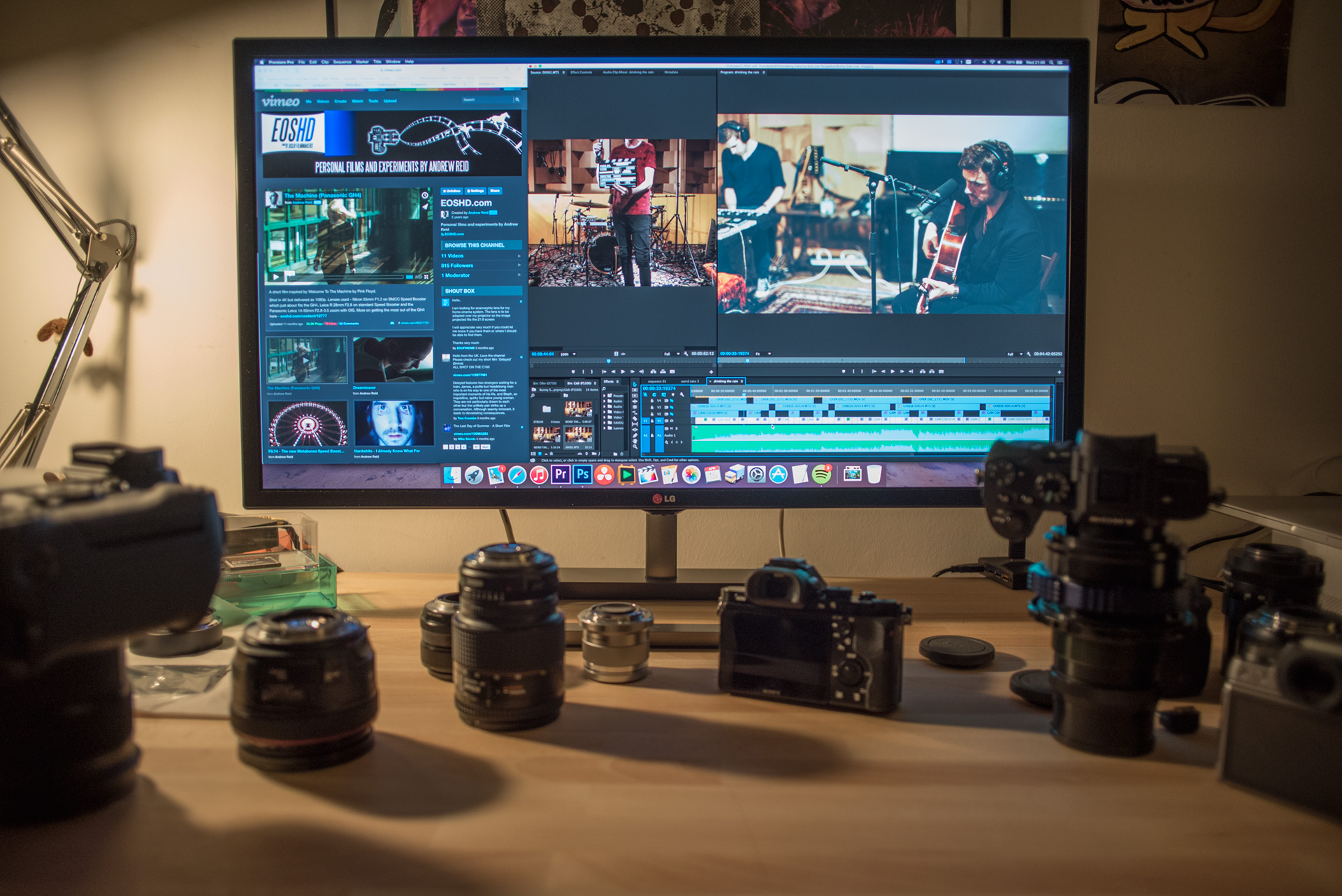 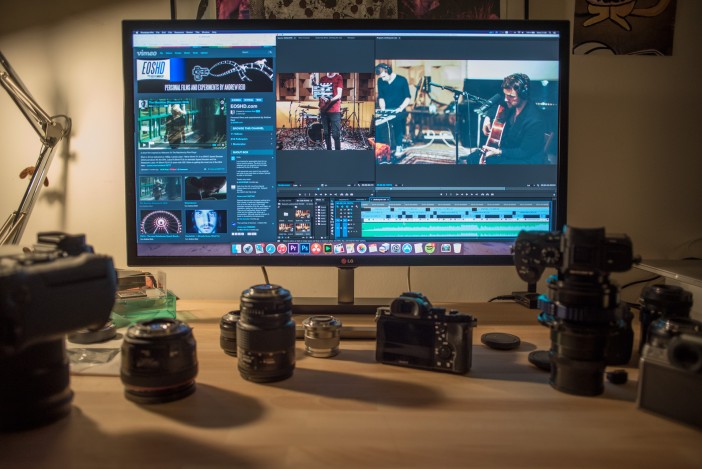 I currently have my late 2013 Macbook Pro Retina plugged into the LG 4K monitor (Thunderbolt to DisplayPort), and surprisingly it works!! This laptop supports DCI 4096 x 2160 not just 3840 x 2160, at up to 50hz. However it sometimes reverts to Ultra HD and cannot yet do 60hz. If it reverts to Ultra HD, after a reboot for example, the solution is simply to reboot again or hit it… hard… with a hammer. This has been a minor quirk for me in practical use so far and I think Apple’s latest Yosemite update fixes the bug, though I’m not so sure about 60hz. 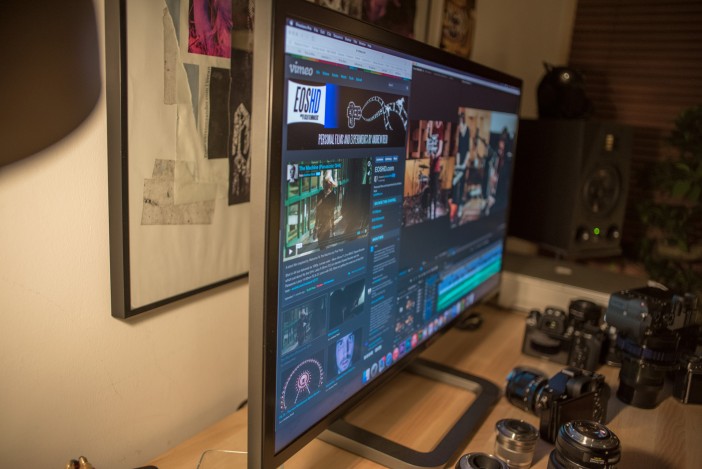 The display can be driven at the full 4K DCI real-estate (1:1) at all times if you prefer. But the way OS X handles scaling is the best on the market, way better than Windows. The screen naturally stays in it’s native full DCI 4K resolution and the Mac scales the UI (user interface) elements to fit – all of it, in ALL apps. Windows only scales some of it, and leaves the rest up to individual apps to support.

I tend to run the screen at the equivalent of quad-HD for general use (especially web surfing) and in 4K when maximum real estate is needed for creative work. The combination of DCI 4K and a large 31″ screen in a 17:9 aspect ratio makes it just about comfortable to make out tiny UI elements when running like that. The 5K 27″ display of the new iMac makes it too difficult to ever run it in 1:1.

Adobe Premiere runs smoothly in the notch down from full 4K – of course the pixel quality and pixel pitch remains true 4K – but the user interface scales. Oddly I get the occasional crash when running in 1:1 DCI 4K mode. I’m generally a bit unimpressed with the stability of Premiere CC anyway, so it’s no great surprise.

I previously used the Samsung 4K TN display which was cheap and cheerful, and actually pretty good for a TFT but IPS gives far better colour rendition and viewing angles. I also tried the lovely super-wide 21:9 LG 34UM95 3440 x 1440 which Dave Dugdale over at Learning DSLR Video is a big fan of. This is super value for money and is an IPS display like the 31MU97… however I wanted to view 4096 x 2160 full screen with no scaling and also to ramp up colour accuracy a few notches. Canon 1D C footage looks stunning on it!!

The 31MU97 does this, though at a price. The 21:9 LG is nip and tuck as good as the iMac display for colour, only less glossy. The LG 4K panel though is a league up and pro territory rather than prosumer. It’s spellbinding. Build quality is also vastly improved over the 21:9 LG, especially the stand. 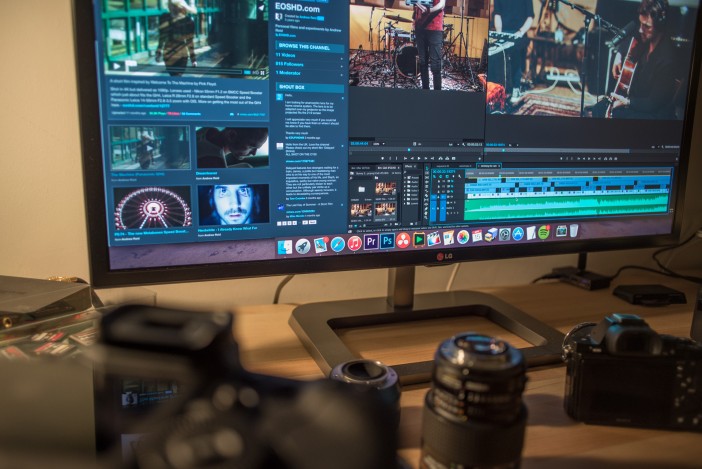 Unlike the iMac 5K display which is very reflective due to the gloss coating the LG 31MU97 is a matte display, favoured by editors and graphics artists the world over. I have no idea why Apple have gone so cold on matte displays and aren’t yet offering a 4K Cinema Display with Thunderbolt, instead leaving it to LG. This is the screen to get if you have a Mac Pro, not the ageing Apple Cinema Display.

This screen has only a single weakness. It isn’t an OLED!

OLED will wipe IPS / LCD off the face of the planet but right now it’s just too expensive, ESPECIALLY when you are talking 4K resolution. To give you an idea of how much, OLED 1080p TVs command a 200% premium over similar IPS 1080p TVs at 55″ (cheapest OLED TV I can find is 2500 euro currently). Going larger than 55″ OLED or to 4K OLED will currently set you back the best part of 10 grand. OLED is all about true black and very deep saturated colour… in normal use the 31MU97 looks like that… but you can catch it out when dimming the lights completely and throwing up the black screen of movie titles or a blank Photoshop canvas. Here, backlight uniformity isn’t quite what LG claim on the supplied calibration sheet that comes with the display, especially when you’re less than 100% parallel to the screen. Uniformity goes completely haywire at tighter angles when the frame is 100% black. When you have anything normal up on the display even if it contains a large area of black, or the lights on, the problem just isn’t as noticeable. 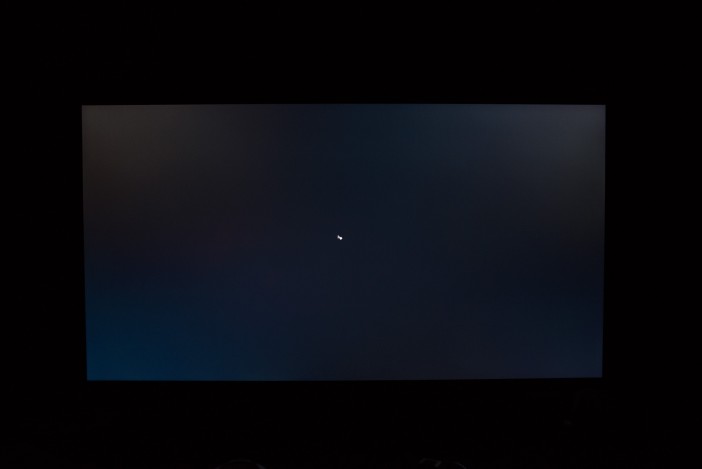 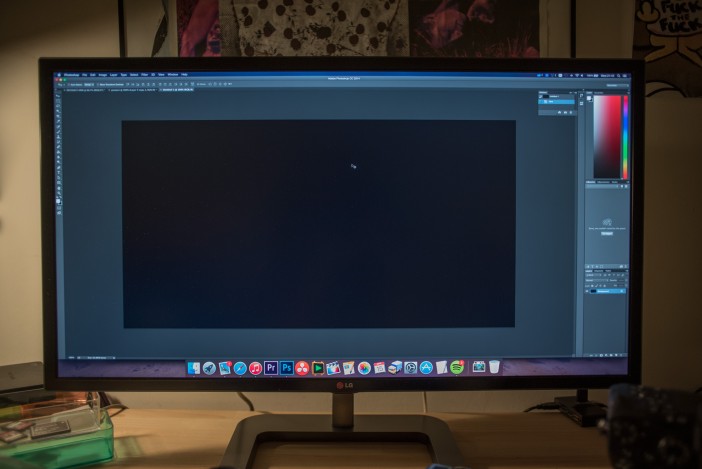 I can recommend and vouch for this one. It’s good.

You don’t need a Mac Pro to run it but it does help to have that, or a powerful PC with plenty of video memory. Occasionally the high end Macbook Pro Retina connected to this display at 4096 x 2160 will simply run out of video memory – for example if you have Resolve and Premiere open at the same time. The Mac Pro solves that, and OS X runs more responsively at the extremely high resolution.

The LG 31MU97-B is about pixel quality. You have to look very closely indeed to see any pixels at all. It is a retina display, basically. On the 3440×1440 or 2560×1440 / Quad HD displays text looks rougher and moire & aliasing creep into very detailed 4K footage because it has to be scaled down to playback on the lower resolution display.

The LG 4K DCI monitor is great for editing especially for those who multitask between two apps open on the same display at any one time. You have vast amounts of resolution when using 1:1 mapping in 4K DCI to exploit and take a true birds-eye view of what you’re doing. Then when you go and surf the web for cat videos you can just drop the resolution (virtually) using the Apple retina display controls in the system menus.

Downsides are LED backlight uniformity in a very dark room – of course it can’t match OLED. A lot of black covering the screen corner to corner with the ambient light in the room completely dark, then you might JUST notice, though it’s still a lot better than other monitors including the 21:9 LG 34UM95 in that regard and usually not noticeable in the real-world. I’ve seen some users do YouTube videos showing the problem at its worse and talking themselves into returning one of the best displays on the market. Don’t be one of them!