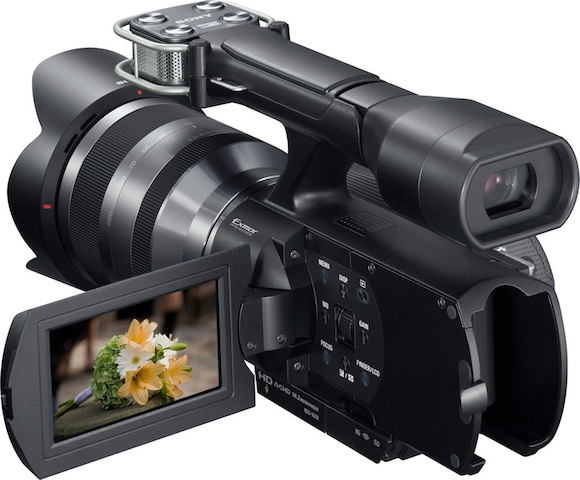 Above: do new dedicated video cameras like the Sony VG10 mark the end of the DSLR video revolution?

Thom Hogan is a great photographer who writes regularly on his blog at ByThom.com – a lot of what he writes, I agree with. However he has a regular stance on video in DSLR cameras – Thom doesn’t want DSLR video hybrids to spoil stills cameras. He says that video on DSLRs is for casual shooting and just a passing craze.

His latest article also writes about 12MP versus 18MP, and is right on the money when it comes to suggesting that most people just don’t need 18MP or the 22 of the Canon 5D Mark II. Thom likes Nikon’s approach to megapixels, and so do I, it’s the approach of a realist with cost in mind – 12MP is enough in terms of resolution yet it’s better for price, video and low light performance.

But then he touches once again on his belief, also shared by Barry Green of DVXUser, that video in DSLRs reflects a transition period, a craze, a short lived work-around until ‘proper video cameras’ make a return.

I am sorry guys, but I simply don’t believe video DSLRs are a stop gap. Thom’s opinion on DSLR video isn’t backed up by the true overall picture coming back from filmmakers and many photographers experimenting with video professionally for the first time, at least not from my perspective.

He says that by diverting R&D resources into integrating video into stills cameras and improving the video capabilities of said stills cameras, this distracts companies from making better stills cameras. Poppy cock!

If you look at what advances are taking place with CMOS sensors – all is to the benefit of stills as well as video – higher ISO performance, faster continuous shooting, smaller mirrorless cameras and soon silent shutters and much better EVFs.

Ergonomically, I believe the GH1 is the most extreme example we currently have of what Thom would say is a stills camera ‘compromised’ to accommodate video. But again, whilst he sees no future in this type of camera, I say that hybrids are the future.

In fact I think the GH1 is a better stills camera exactly because of the concessions to video. The articulated live view operation, is to my mind much more representative of the stills camera future than the tired old optical view finder held at eye level with no depth of field preview.

What other compromises did we get on this true ‘hybrid’ that made it so bad for stills? Well, a dedicated video record button that has no impact on the stills ergonomics, and an expensive kit lens with impressive AF performance and silent operation. Hardly a stills camera wrecker because of the HD sticker on the camera surely?

Now video DSLRs will surely come under pressure from new products like the Sony NEX VG10 and Panasonic AF100 (the latter significantly superior than the Sony, but more expensive). But I personally will not be buying one.

Why? Well, the new breed of large sensor camcorders are not only more expensive than video DSLRs they will offer similar image quality as near as makes no difference. The VG10 does not even have 24p, and the AF100 is simply the GH1’s sensor with no hack for more money. Sure the VG10 has a Zoom H4N style mic included in the price, a very good kit lens and the AF100 will have live HDMI out which will be a biggy on production sets, but future video DSLRs may also get this feature. Meanwhile, the new technology will reach consumer DSLRs first, because this is the bigger market. The GH2 will have better image quality for less money and the current GH1’s hack means that higher bit rates are already possible for bargain basement prices.

So do I see the stand-alone video camera as the future? Quite the opposite. I thought this kind of camera represents the past? They are heavier, larger, more intrusive and less intimate. They’re more expensive, and arguably you’d need to buy a DSLR anyway if you have any plans whatsoever to take stills, so why have two cameras of basically the same specification of technology inside?

Suppose the GH2 gets a global shutter, live HD output, 1080/60p and much better low light performance? Would you then buy an AF100 for a different chassis design, worse image quality, and a handle?

Another caveat of the video-camera-brigade is that the current interchangeable lenses do not yet have powered zooms or proper video orientated manual focus operation without buying a follow focus. Again, why bother with the expense of a VG10 when it has the same lens as the NEX?

I believe the VG10 and AF100 will be relative flops.

It is not a case of whether people need hybrids, more whether people still need such separate devices at all in 2010. All the best selling progressive hardware on the market today is good at combining functionality into one device. Look at the iPhone. Phones are surely going to replace compact cameras, in much the same way they’re replacing stand-alone handheld games consoles like the Sony PSP. The smartphone is not a jack of all trades. It is a master of each and a pocketable necessity which saves the space in your other 3 or 4 pockets.

Let’s look at what Thom has to say on the Sony VG10:

I predicted this transition when the D90 first came out: the video companies are going to eventually stifle the video-enabled DSLR.

Panasonic will be filling in the details on its new entry shortly, and I believe that they’ve moved their delivery date up to match Sony. So suddenly we face the fall with the prospect of two dedicated large frame video cameras from the majors competing with video-enabled DSLRs.

All that extra work the DSLR makers have been doing “fixing” the video side of their DSLR is going to get a real challenge. If you’ve ever shot a production with both a DSLR and a real video camera, you’ll know what’s about to happen: the minute we have competent video cameras, the urge to spend US$3000+ to convert a DSLR (Redrock, Beachtek, etc.) so that it’s usable for shooting is going to start to go away.

Worse still, with cellphones like the iPhone 4 and compact cameras proving that they can do competent HD video for casual situations, the need for “casual” video in DSLRs is lessened, too. I hate to sound like a worn record, but I’ve been warning for two years that diverting engineering resources to add video to DSLRs came at the expense of still work. We’re beginning to see the impact of that poor decision, and it’s only going to get worse.

Imagine, instead, that a solely still camera company–Nikon comes to mind–had simply put all that engineering into a modular, programmable, communicating still camera. As the video-enabled DSLR craze starts to dry up, such a still camera would dominate the still market. Just so I’m clear, the still camera market is far bigger than the video camera market. See the problem?

The Japanese makers don’t understand Apple’s laser-like focus on new product definition. Apple understands the 80/20 rule. The Japanese seem to think every product needs everything. No. It needs 80% of the right things.

What the DSLR video revolution has shown is that all cameras, be it video or stills are just picture making boxes that you attach lenses to. Everything else is just the bells and whistles. What matters most to people like me is picture quality, cost and accessibility. I am fine with ingenious workarounds and hacks.

Companies like Zacuto, Hot Rod Cameras or RedRock need not feel threatened by the advent of true dedicated interchangeable lens video cameras. The majority of people will still be using DSLRs to shoot video. The people who can afford the best cameras will simply buy an Arri Alexa. The indies will mostly keep using video DSLRs because these are more accessible, the most cost affective and they can buy more than one.

Many potential buyers which Panasonic and Sony are aiming their interchangeable lens video cameras at already have invested in things like Zacuto Z-Finders, will they be prepared to throw all that on the fire for what is essentially the same camera but with slightly more integrated video ergonomics? I think not.

There is the stealth factor to consider for shooting on the streets and in public places too, where crowds can interfere with shoots when they see a video camera and start playing up for it. That’s fine if you have a huge crew and permission to control an area of the street or cordon public spaces for a day, but the same naturalistic shooting in public places can be done cheaper with DSLRs and a small crew of 1 or 2 plus acting talent.

This is what DSLRs represent, and so it is in fact the dedicated video cameras which are the inbetweeners.