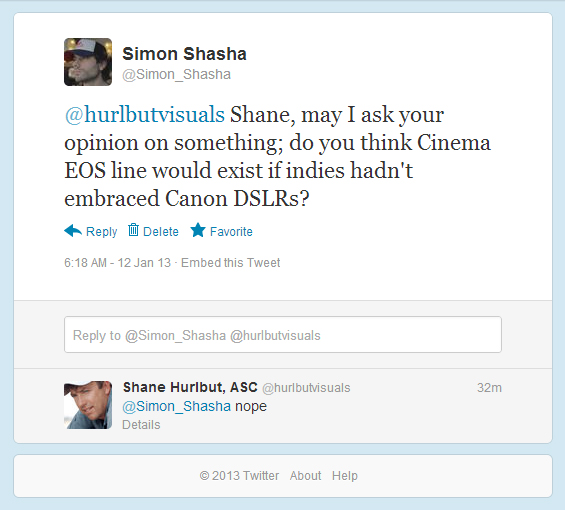 Canon entered the indie filmmaking market in 2009 with the 5D Mark II whether they intended to or not. The live view stills mode enabled a rudimentary video feature. This provided the basis for a whole new business, that ignores completely the indie filmmaker.

I am currently reading a real American classic called Catch 22.

As an indie filmmaker I feel like I am also in a Catch 22, or rather a Canon 22.

I want a 4K DSLR but Colonel Canon keeps increasing the profit margins until I can’t afford one. The only way to get a 4K DSLR is to spend the money I was going to spend on actors and then I have no content. If I spend the money on content I have no camera and have to make do with shoddy 1080p on the 5D Mark III! Good thing Yossarian smuggled in the Blackmagic Cinema Camera!

Yes you and I are blocked from 1D C ownership unfortunately. Colonel Canon shows his gratitude for starting the Cinema EOS business by taking his business away from us.

Understandably all the indies I know have had quite enough of such nonsense and have marched in the direction of alternatives such as the Nikon D800, Sony FS100, Panasonic GH2, GH3 and Blackmagic Cinema Camera.

Equally understandable is that pros have embraced Canon’s high pricing because they can make it back in a weekend and it represents a sound investment, but whatever happened to us?

We started it. We were the ones buying the 5D Mark II en masse for video and indie cinema.

4K isn’t the main thing at stake here. I’d be happy finally getting GOOD 4:2:2 1080p on a full frame DSLR with no moire or softness. They still haven’t given us even a decent 1080p image. None of the 8bit outputs of the DSLRs hold a candle to what the Blackmagic Cinema Camera looks like in ProRes let alone raw, for $3000.

Now you may have noticed Shane’s tweet above. Shane is someone I have upmost respect for and he’s been a great advocate of professional DSLR use. Now he’s a great advocate of pros using the Cinema EOS line and rightly so. Now there’s no real need to use a consumer DSLR on a professional production and I’m comfortable with the logic. Unless you need one for the small size and low weight, or as a crash cam you’re better off with an Arri Alexa…erm… I mean C500. I don’t really mind if DSLRs are dead for professional video production because they were never designed for those people in the first place. Once the professional interchangeable lens cameras came along, these pros got what they want. Cinema EOS serves a purpose for them. But why should indies have to suffer for it?

Why should the army of Yossarians shooting on 5D Mark IIIs have to put up with such a soft image, lousy codec and crippled HDMI output? Why should they have to wait 3 years for even the smallest improvement to image quality? Why should we put up with it?

I’m going to go and see Colonel Canon immediately and ask him why he keeps increasing his profit margins at the expense of his core business – photographers who are interested in shooting video as well as stills, consumers who want to see improvements to image quality keep coming, and the thousands of indie filmmakers and artists who buy Canon DSLRs for their projects.