Here’s our first glimpse of Red Tails in action, the Lucasfilm picture that Philip Bloom was a camera operator on with the Canon 7D and 5DMkII.

According to Philip Bloom on Twitter there are at least 5 shots in the trailer from a DSLR, and you just can’t really tell them apart from the Sony F35 CineAlta A-cam shots. Check out more BTS and photos here and download the HD version of the trailer here.

This footage acts as a timely reminder for all aspiring filmmakers. DSLR image quality – even the line skipping flawed image you get from the Canon DSLR back in 2009 – is good enough for serious work at the highest level.

The fallacy of pixel-peeping

We should not be determining a camera’s place in the world (or your projects) by just microscopically analysing its image.

There are some real myths out there at the moment surrounding gear like the ‘what’s around the corner’ syndrome, that of waiting for ages to buy a camera because always waiting for a better model. There will always be improvements but the importance of a camera body is vastly overrated and the gulf between consumer and pro hardware is much smaller than it was in the earlier days of DV.

Indeed most aspiring / low budget filmmaker will simply be wasting their money upgrading to an AF100 or FS100 when DSLRs give you so much bang for buck. If you do have a lot to spend on gear, it’s better spend it on a good lens instead. Glass is a much better investment for most people and can give you a real boost in aesthetics and image quality.

But by far the biggest myth is that the absolute worth and value of a camera can be determined by it’s image quality at 1:1 on a computer screen.

The fallacy of pixel peeping image quality can be neatly illustrated in stills land at the moment. All the noise on internet forums about gear misses the bigger picture and has nothing to do with the creative or inspirational use of a camera, aka filmmaking! At best it is a scientific test, a guide, not a complete answer.

In the trailer for Red Tails it is all but impossible to tell what was shot by Philip on a DSLR and what is from the Sony F35 and I expect the same to be true at the cinema. Resolution or low light performance is not the be-all and end-all of a filmmaking tool.

The difference between going out and shooting with one and not doing is far greater!!

Here’s an example of an image quality based myth. There was for a long time a belief amongst enthusiasts that the Fuji F31fd was better than a more modern compact because it only had a 6 megapixel sensor with ‘clean ISO 1600’. It was, people thought, ‘a great performer in low light’, and still unmatched at high ISOs for a compact compared to the pixel-packed modern alternative. Imaging Resource complain in their review of the creative and well featured Sony HX9 meanwhile that its ‘heavy noise suppression gives images a water-colour look and there is very little fine detail above ISO 800’. Deal breaker? For many yes but it shouldn’t be.

When looking at identical samples from the F31fd and HX9 (below, courtesy of Imaging Resource) you might well think that the F31fd is better defined and less noisy than the modern HX9. On the F31fd shot on the right, you can see the fine thread of the red cotton and on the HX9v it is smudged out despite the HX9 being almost a decade newer! 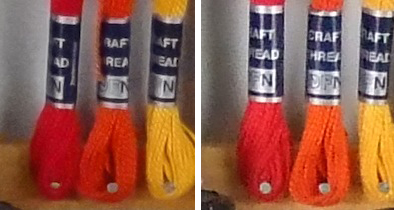 However when you scale the 16 megapixel images of the Sony HX9v down to 6 megapixel and compare it at ISO 1600 to the legendary Fuji F31fd, the HX9 is actually better, yes – even at ISO 1600. 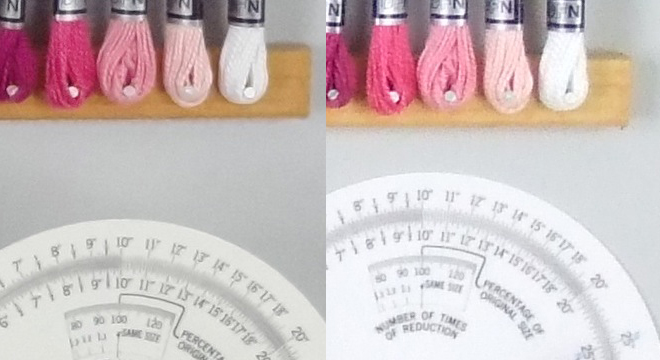 And when you stand back from the picture hung on the damn wall the difference is even less!

So what does all this pixel peeping tell us? Not very much.

Likewise DSLR footage on a large cinema screen or high quality projector looks a million dollars, it’s a different world to Vimeo or a TFT monitor.

Pixel peeping is like judging the broad strokes of a painting with a microscope.

It’s time to start looking at the paintings instead.