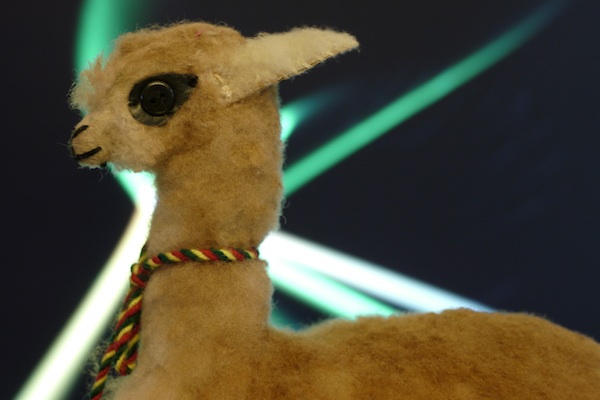 As the Panasonic GH1 Custom Firmware develops further, we now have quite a lot of options to choose from.

We needed a really good test. So what’s even more fearsome than a camera chart? A lama. That’s what.

Made of real lama wool, the High Bit Rate Luma Lama is a fierce test for any camera. The fine fur shows up at a 1:1 pixel level, the encoder just can’t cope with the sheer high craftsmanship on display.

To add to the camera stress test, the lama even features a multicoloured neck scarf.

It’s eyes, as black as coal and as angry as fighter jets – these are to test, erm, black levels.

It’s small but stern legs keep it steady whilst the test proceeds under the kind of laboratory conditions DXOMark would be envious of.

So you can properly compare the lama’s gentle fur in each type of footage I’ve carefully overlaid still frames from the footage in Photoshop .PSD images. You’ll need Photoshop to open them but it’s worth a look because you can toggle layers on and off and see the difference very clearly.

You can also magnify or zoom in on certain areas – like the Lama’s ears. It’s more interactive and better than looking at two images side by side. Here are the downloads hosted on SendSpace:

This is the highest bitrate footage from the GH1. Unfortunately, my Lama test crashes the camera. The GH1 just cannot handle lama heads. You can go out and shoot anything in the world, be it ocean views, mountain vistas or even the England football team and the GH1 doesn’t puke. But show it the Lama head and it’s dead.

The GH1 and the 5D Mark II are almost equal in terms of resolution and detail at 1080p for those who watch films by resting their head against their television screens.

If they take their eyes off the actors and look at the trees in the background, they will be able to see that the GH1 has a very slight edge in fact.

But in all seriousness now – that the 720p MJPEG mode can match the 1080p mode is something of a surprise. Could Panasonic and Canon not have real 1080p modes in their cameras at all?

EOSHD’s secret recipe appears to have very slightly more resolution than the upscaled 720p, and more than AVCHD. But it’s not without downsides. MJPEG is nosier at high ISOs. The noise reduction engine doesn’t seem to be operational. The other slight downside of MJPEG is that the image has more moire and aliasing than in AVCHD mode and it’s 30p, not 24p or 25p.

The peak scene detail in this AVCHD mode is excellent. Where there is unpredictable detail, like the Lama’s incredible nose, it’s rendered really nicely. Best of the lot. But take the scene as a whole, some of the finer and more subtle details which tend to be repeated in one area, like the lama’s hairstyle is smoothed over.

That’s all due to the way AVCHD compression works in macro-blocks. Certain blocks are not given as many ‘bits’ from the overall bitrate bucket as others which contain more complex and less-predictable details. But actually I think this is a good thing. It renders a nice smooth image. It’s better at high ISOs. The detail is less eye fatiguing in motion and more interesting details get prioritised. Bokeh has a smoother look without banding over underexposed areas.

This is the part most people skip to in camera reviews.

Well the lama has spoken and as usual, all this pixel peeping reveals some not-too-large differences. AVCHD has a smooth look and is more reliable. Not as buggy. AVCHD 44Mbit edges a win because it’s more suitable for daily tasks.

It has a much better running time and takes up less card space. The quality at 44Mbit is now very close with 1080p MJPEG and a world away from what we had before.

Maybe it’s best not too look at pixels too much, or any more lamas. For a much more technical test you could head over to DVXUSER and discuss the result ad-nausuem.

But for the rest of us, happy shooting in AVCHD 44Mbit mode!