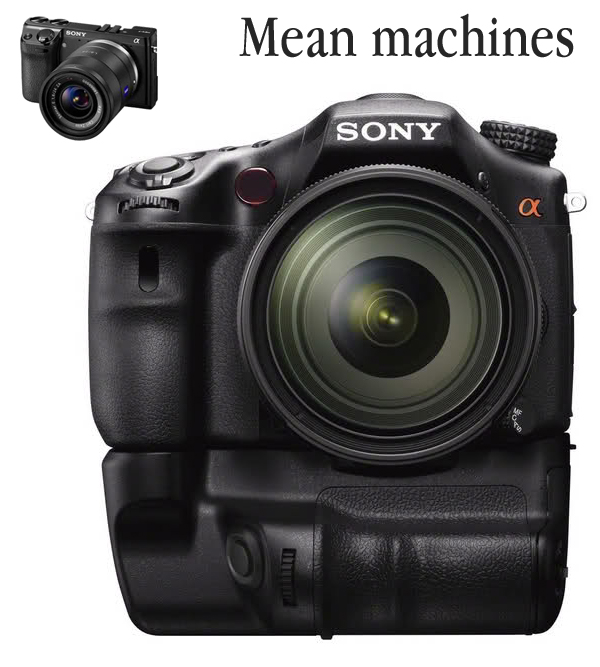 SonyAlphaRumors have had a huge Sony horde of leaks including the first images of the production Sony NEX7, a camera likely to blow the GH2 and Fuji X100 into the dust. It launches alongside a new video optimised Zeiss 24mm F1.8.

With 1080/60p at 28Mbit, the NEX7 is  pro mirrorless camera with 24 megapixel sensor and metal body. It maintains the small size of the NEX5 but with more manual control, a hotshoe, built in OLED viewfinder and beefier grip.

It is the closest we will get for now to a mirrorless version of the 5D Mark II. It will be compatible with PL mount cinema lenses via a third party adapter without modification.

The NEX7 launches in August alongside two other exciting cameras, the A77 and VG20. It is the biggest product launch in Sony’s digital-imaging history, with an updated 16.1MP NEX5 and several new video optimised lenses also coming.

It will be interesting to see what they do with the E-mount VG20 camcorder and how they position it now the FS100 is out. Rather than using the newest A77 / NEX7 sensor I’m expecting it to be a modest update to the VG10 which was based on the NEX5’s sensor and image processor. It could use the sensor from the NEX-C3, but then there is the question of what the NEX 5N specs are and whether the VG20 will be based on that, as was the situation with the VG10.

The NEX7 really pleases me since it fills the gap Panasonic left when they brought the GF1 down-market with subsequent low quality consumer-orientated updates.

I can’t wait to finally use my none-Canon DSLR compatible lenses (like LOMO OCT18 anamorphic) on an APS-C sized sensor, which is larger than the Micro Four Thirds imager in the GH2.

Video quality and manual control is as of now an unknown quantity on the NEX7 but all the signs point to it being killer. The technology on display here is truly cutting edge and bang up to date.

Leaked specs say the camera features an FX and PS mode like on the Sony HX9v compact, which would make sense. But sources seem confused on whether video is 24p or 24Mbit. I think they have got the FX mode bitrate of 24Mbit confused with 24p and the camera will be FX 24Mbit 1080i and PS 28Mbit 1080/60p.

According to the AVCHD terminology PS mode is 1080/60p/50p at 28Mbit and the older FX standard is 24mbit in a variety of flavours including interlaced and 720p. FH is 17Mbit, like on the original GH1.

Video wasn’t really usable on the previous NEX cameras with low bitrates, moire, no manual controls, interlaced codec and a silly crop when you hit record but there are signs Sony are finally coming to their senses and providing for filmmakers with their DSLRs. Even the PR blurbs for the lower end Sony NEX-C3 mention a limited amount of creative freedom and manual control in video mode. Hooray!