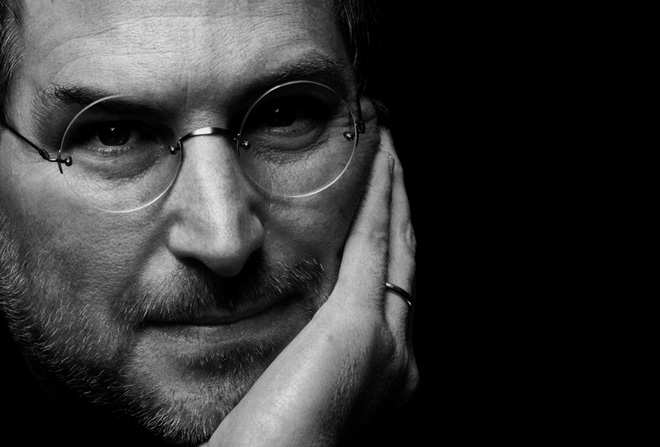 For me the best legacy that Steve Jobs leaves is the importance of having conviction in your ideas and the passion to see them through.

A young Steve Jobs had a head-strong enthusiasm and belief around people in far more powerful positions and wasn’t afraid to show it. In talks to buy flagging Xerox in the early 80’s, Steve lambasted their top management for a lack of creativity, told them they were idiots and told them that their products were boring and that they were wasting a great technological expertise on nothing. In a meeting with the French president to negotiate a contract for the country to buy Macs for schools, Steve in no uncertain terms told him how to run the country! “I have some ideas…”

In the 90’s a Jobless Apple were on the verge of bankruptcy. How easy would it have been for them to roll over and adopt Microsoft’s dominant standards for their Mac line? The irony is Nokia did exactly that in their phone business recently. Out-smarted by Jobs, they lacked the conviction, the belief and imagination to save their business so they called on Microsoft’s operating system for their smart-phones.

Above: An Apple ad which never aired with narration by Steve Jobs

Steve reinvented Apple as a consumer electronics giant. If Apple are now going to be asking itself constantly “What would Steve do?” it will be a great shame, because the secret of Steve’s success was to never ask ‘What would someone else do?’

Steve went his own way and didn’t let other people influence or water-down his imagination. He is the world’s most successful example of American capitalism to this date. 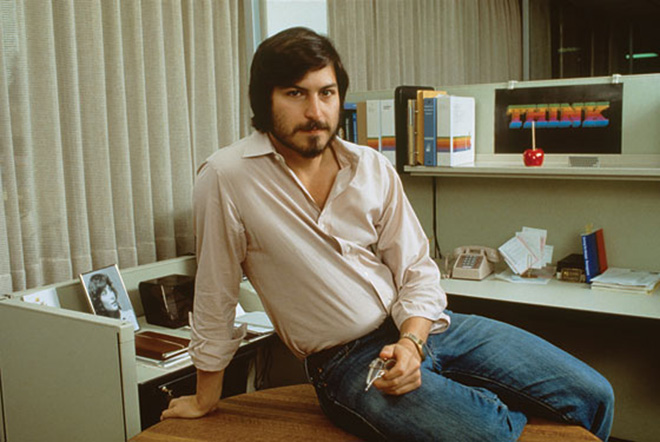 Jobs had taste as well, where ordinary geeks lacked that culture in their work. You see it in every Apple product, the simplicity, the charisma, the personable nature of using a Mac or iPhone. Every Apple product is a tool that assists creativity rather than hinders it. In part I owe my living to products like Final Cut Pro and Mac OSX. These were freedom for me, much as they were for millions more. An open door.

For many people the cultured nature of Apple came across as snobbery during the phase of Apple when Jobs wasn’t at the helm. Macs were elitist. But it was just that the engineering and usability of Apple’s products hadn’t truly sunk in. I was resistant for a while, even to the iPod. The 1st generation iPod Touch being the product to finally hammer it home, then OSX, then the iPhone. 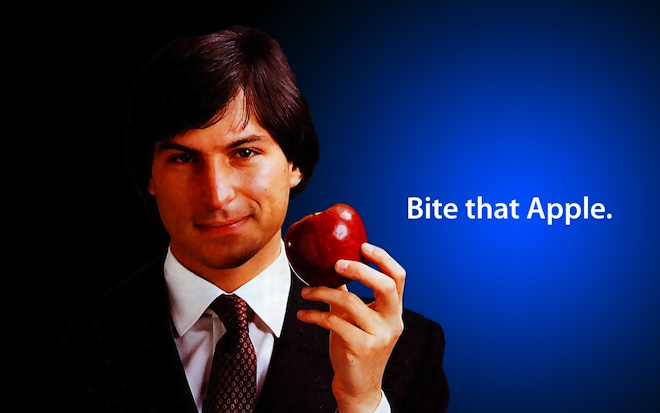 The ultra conservative business mindset is to hone and refine, to evolve and to consolidate in the belief that it leads to a profit. This is what Canon and Nikon are doing at the moment. You need more than that. Because the world changes and it does so quickly.

Steve Jobs was 10 years ahead of his nearest competitor in the technology industry because he had vision, he could see what people wanted before they knew themselves. That kind of leap takes imagination and conviction.

It takes risk. It is not about asking a focus group or the public what they want. 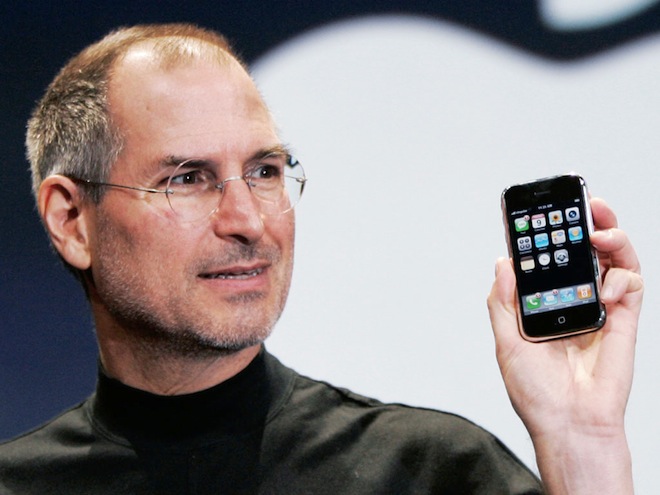 He was also a great judge of character. He doggedly and determinedly chose the best people to go around him within Apple. He had the instincts to figure people out – he always sussed their strengths and weaknesses. Even the hiring of Pepsi boss John Sculley in the 80’s (bating him with lines like ‘Do you want to change the world or be a sugared water salesman for the rest of your life?’) was in fact a masterstroke – although it may not have seemed so when he fired Steve!

But John Sculley taught Steve about marketing and the fevered enthusiasm a product can generate with the right theatre. The Ridley Scott directed Mac commercial in the 80’s and Apple’s charismatic (until now) product launches are testament to that.

There have been British computer visionaries, but none of them ever understood the human side or marketing. Technical people often lack the right brained artistic creativity that’s needed to inspire people about a product.

To say people are inspired about Apple products today would be a massive understatement.

I will remember that Steve wanted to create a universally used ‘tool for the mind’ and that was his goal in life. He succeeded. But to do so he had to be interested enough to push it forwards.

Without innate passion a talent goes unfulfilled and Jobs needed to make Apple his life. Steve loved what he did day in day out at Apple, at NeXT, at Pixar. Some may think that anyone would enjoy life on the Apple campus but someone had to have the passion to build one first. He said it himself – if he didn’t enjoy it enough to let it consume his life, he’d have been crazy to do what he did. 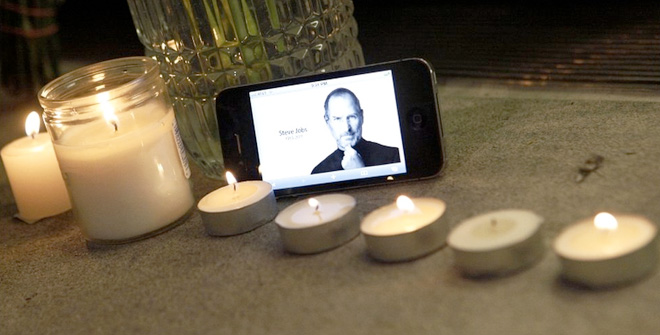 He was also one of us – a lover of technology, a geek. He found the smaller 3.5″ Sony floppy disk drive in Japan before anyone else. He had it in his Mac before the PC industry. This was something which was the bedrock of computing for the next 15 years and Jobs found it first. When all smart-phones had stylus pens, clunky desktop PC like user interfaces and keypads Steve thought differently. A lack of vision, taste and imagination is as enduring as having it, and it is why some manufacturers still put out smart phones with stylus pens, cluttered app stores, clunky desktop PC like user interfaces and keypads.

Having realised a lack of innovation doesn’t sell, they then simply copy Apple! Many businesses are afraid of change, and that’s a shame. The world constantly yearns to be reinvented. A mere 5 years since Apple entered the phone market from scratch, look where the stagnated Nokia are now. Apple’s secret was to design a product as smart and app orientated as a Mac but as sleek and personal as mobile phone. Apple also had compelling entry points for customers. Buying an iPod leads inevitably to an iPhone. Recognising the sheer power of Final Cut Pro leads to buying a Macbook. This is something a post-Steve Jobs Apple did not take into consideration when launching the dumbed down FCPX. 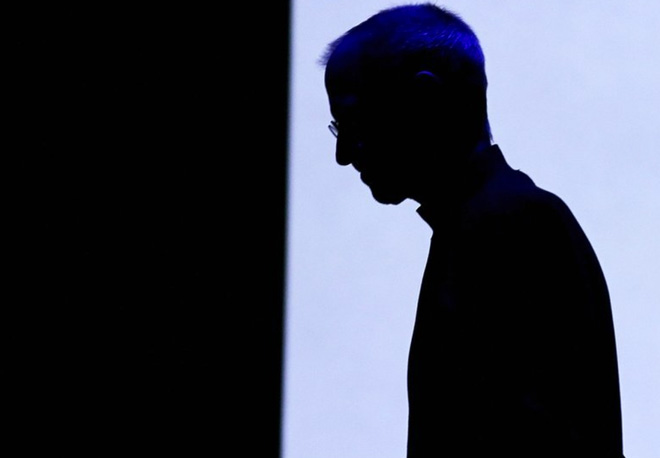 When the history is summed up of how several millenniums worth of technology first got started Steve’s name will be top of the bill.

So long Steve. Thanks for having the courage to think differently and to stand out from the crowd.

And one more thing… 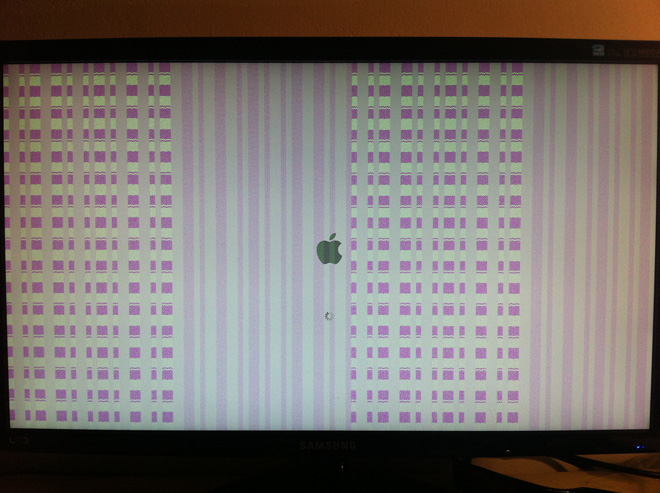 Curiously as if it knew his creator was going to pass from this world my Macbook broke down at the weekend with a failed logic-board.

And my advice is if you ever find yourself with a broken Macbook Pro on the eve of a big project, try baking it in the oven.

I did so and it fixed my Macbook!

First, unscrew the case and take out the logic board, all you need is a Torx T6 screwdriver.

Here is what the inside of a Macbook looks like, although I threw out the optical drive to save some weight some time ago. We don’t need those any more. 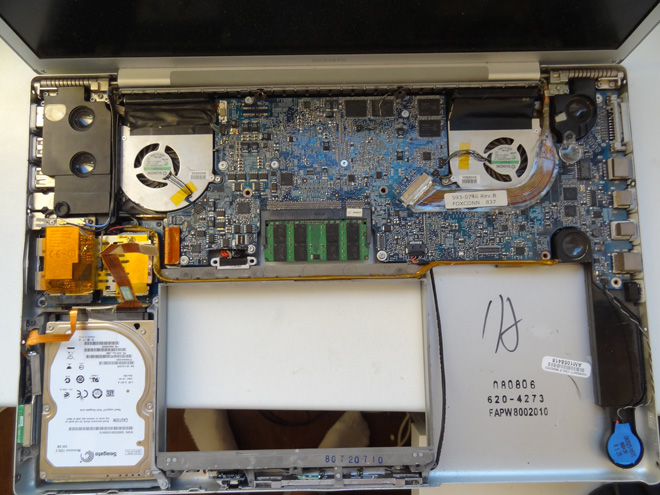 Next get the baking tray out.

Pop the logic-board on it. That’s this part… 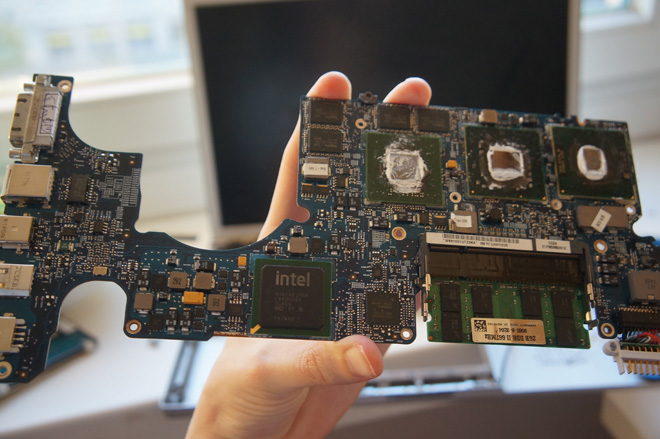 Take the memory out!

Then cover the ports with tin foil. Don’t worry about the plastic on the display port, it won’t melt! 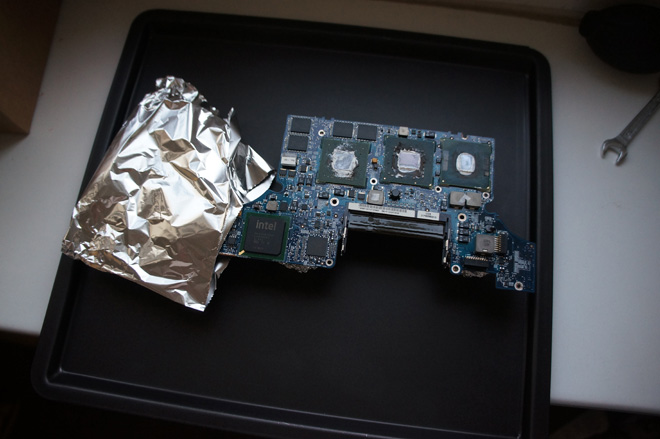 Raise the board up off what is going to be an extremely hot metal tray by using scrunched up balls of foil. 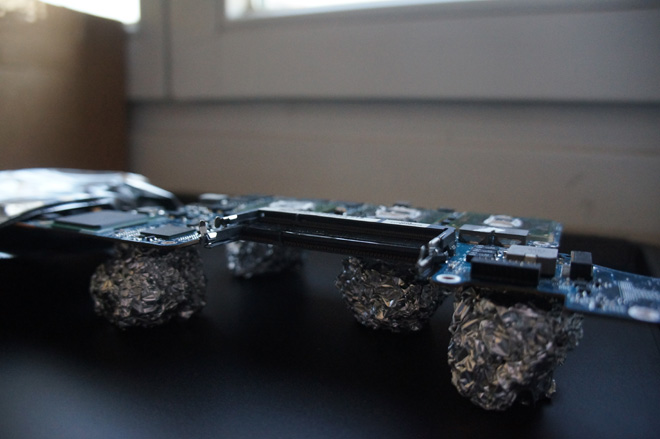 And now here are the cooking instructions…

1x ball of solder on tin foil on the baking tray to act as a secondary timer. Take it out of the oven when it melts.

1x iPhone to act as a stop-watch. Don’t put that in the oven.

Cook for roughly 5 minutes at 180 degrees centigrade or until the sample ball of solder melts onto the tin foil next to the board.

The effect is for the solder on the logic-board to reflow and heal the micro cracks in the board caused by rough and tumble over time. 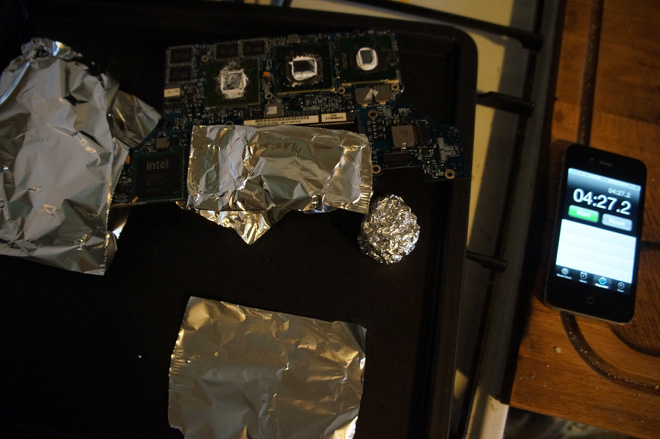 Now serve and you have a fixed Macbook. 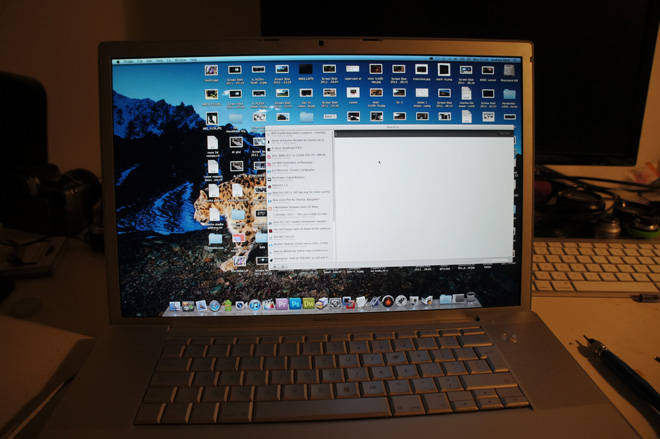