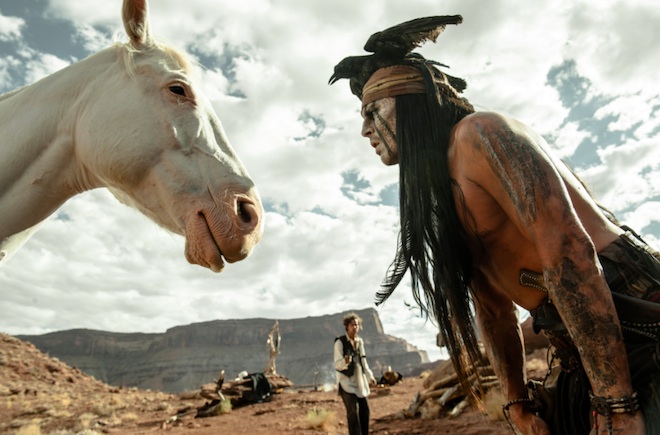 Spielberg recently said he felt the multiplex cinema filmmaking industry was heading for implosion, where someone making a $250m popcorn movie forgets to add a compelling reason for an audience to see it. A string of massively costly flops follow, bringing the system to its knees. The soft opening of Lone Ranger (a western with Johnny Depp by the makers of Pirates of the Caribbean) points to Spielberg being right on the money…

Lone Ranger is a movie which attempts to target everyone.

As a result it could be a quarter of a billion dollar failure for Disney.

Over the 4th July weekend, the feature was soundly trashed $142m to $48m, over a 5 day holiday debut by Universal Studio’s Despicable Me 2.

Lone Ranger had a spiralling budget in the region of $250m but observers are pinning the blame on Lone Ranger appealing to an ‘older audience’ (that is anyone over 35). I find this astonishing, because the over 35 market makes up a huge proportion of the total cinemagoing audience in the US.

Is that not enough?

It would appear not. What’s clear to me, is that studio execs consider 50% of the audience too niche. Lone Ranger is a ‘fringe film’ with Johnny Depp! The only conclusion I can reach from this, is that the cinema industry has gone insane.

Alas the studio machine has neglected to do one small but important calculation. Despicable Me 2 is actually a good film and Lone Ranger is tired nonsense with a 24% metascore on Rotten Tomatoes, although in common with many people I haven’t yet seen it – so should reserve final judgement until I have!

The trailer however has long been on heavy rotation in cinemas worldwide. I remember seeing this ages ago and didn’t think it would either A) flop or B) cost $250m. But shit happens.

Lone Ranger is a bit like building the world’s most expensive aeroplane without checking to see if the wings are attached. Did anyone checked to see if it was a good script? Analysts are calling the 5 day $48m revenue ‘paltry’, and that seems obscene to me – like a bank forcasting profit of $11bn but coming up short at $10bn, in the midst of a recession.

How many $1 billion international box office hits like Dark Knight Rises do execs think they can make? Do they think if they get the right formula they can press a button and roll them off a production line? Cinema, indeed any art form, doesn’t abide by the same logic that mass production  does.

The execs that consider a film ‘failed’ when it appeals to over half of cinemagoers and takes $48m in 5 days have no place running any part of the creative industries. It’s clear they think movie making is a production line. It isn’t. Movie making, like all creative pursuits, is a huge gamble. Even with the insurance policy of a huge star, a proven formula and massive international marketing campaigns, recouping a $250m investment in a creative project is always going to be risk.

Films like World War Z and Lone Ranger with $250m budgets are not sustainable business. In order to make a return on that kind of budget, the film needs to be truly special and attract a phenomenal audience. Here is where a chasm has opening up between the general public and the film industry. The films just aren’t good enough.

The competition is also far tougher. Up until now the movie industry didn’t have to compete with such strong television output, a huge video game industry or indeed the entire internet for people’s attention.

Hollywood has become so creatively malnourished they even risk a drain of top directors, writers and actors hand over fist to the TV industry. Unthinkable a few years ago. David Lynch, Steven Spielberg, Matt Damon and others have already jumped partially off the sinking ship.

Big movies have bombed before and Hollywood has survived. What makes this any different?

And what he said next was for me a total giveaway to exactly what makes this era of Hollywood so problematic.

“Everything was perfect on paper”

The studios have come to value certain metrics and formulas behind the production of a film more than the content itself, because they only understand the figures and the selling.

They have neatly divided people up into demographics and stats. Audiences are naturally divided in their tastes but it’s far more complex than aiming family friendly franchises at a holiday weekend audience. It takes creative magic and good ideas, up there on the screen. Yes incredible I know! And that individuality of human beings and their expectations of seeing something good is exactly why it’s a tough job to sell one bland flavour to such a broad audience.

According to The Guardian, industry analysts Cowen & Co had already predicted a $100m loss for Gore Verbinski’s flop, based on a 1930s radio serial. Bear in mind that studio Disney and producer Jerry Bruckheimer plan to re-team on Pirates of the Caribbean 5 – yes five! Observers say a potential $150m loss on Lone Ranger could ‘strain’ the relationship. No kidding! I say scrap Pirates now before it’s too late. It is the end of the summer blockbuster era.

Whilst there’s a certain amount of greed inherent in aiming for a $1bn box office return on a $250m budget, it’s only normal capitalism. The problem is that the balance has been lost between the production line side of filmmaking and the creative side. Hopefully we as filmmakers as well as the audience can salvage something from the dust once Hollywood inevitably implodes.