Hollywood wanted a 4K DSLR so Canon saw an opportunity and enabled 1.3x 4K crop video mode on their 1D X. The 1D C was born and the £12,000 price tag made sure nobody bought it.

With the Samsung NX1, the consumer didn’t want 4K H.265 but is getting it anyway, because Samsung wants them to buy that lovely 4K TV to view the footage with. This is called technological progress, where more powerful machines are thrust upon an unexpected public and everyone gets excited.

Now the two world collide in this shoutout. Expect fireworks! 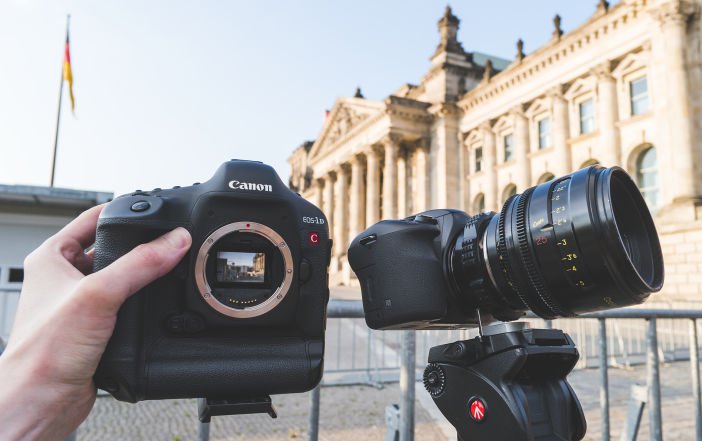 The wise old hand enters the room, his name is Mr Canon.

Sammy is playing in the corner. Sammy is 2 years old. Sammy likes to play with his crayons to make pretty pictures in 4K resolution.

Mr Canon was an artist once as well before he became jaded and retired.

As a result Mr Canon can name 100 shades of green. Teal, olive, forest green, jungle green and so on until his wife left him.

He remembers being profoundly disappointed when he learnt that turquoise was in fact not a hue of green but a type of blue. It sent him into a rage and he had to sit down in front of a vast turquoise sea to calm down.

Mr Canon is also a bit of a nerd when it comes to reds. He has a bit of a thing for warm colours as it reminds of him of his loving wife’s face, before she went off with Mr Sony.

Hues of red include lust, desire, ruby and of course Scarlet, the intensity of which is only matched in the red of Jim Jannard’s face when he read Philip Bloom’s review of the Epic.

Now, the wise old Canon San would love to teach Sammy about colour but he is just too young.

Although he has 16 million crayons, 3 are his favourite. Green, green and light green.

The problem is very much evident in this crayon drawing Sammy made, compared to the one from Mr Canon. 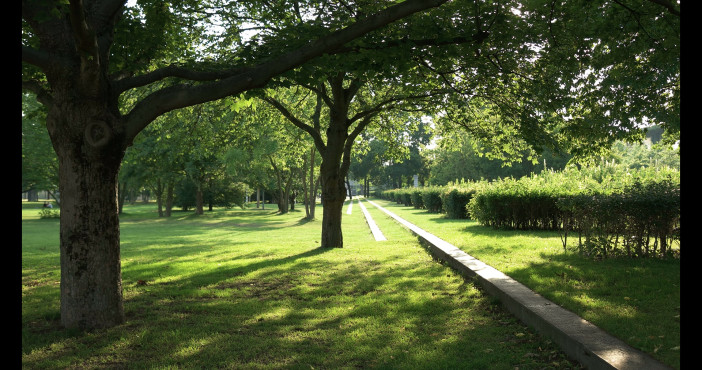 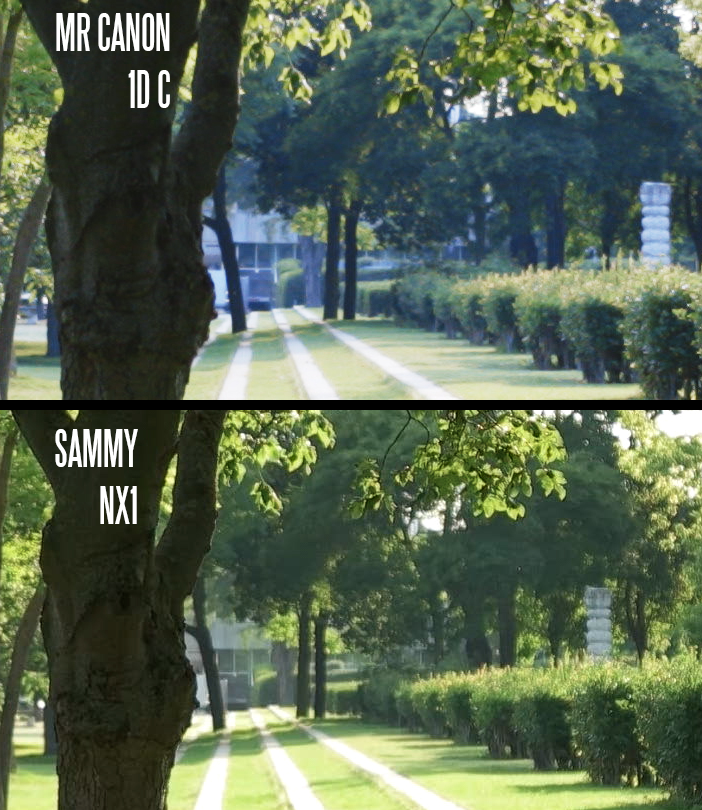 In the 1D C’s image I can clearly make out more hues of green and even some colours that are not green!

Alas the NX1 has a screen of RGB sliders for each picture profile and a hue adjustment. Does dialling down green or shifting the hue away from green and towards magenta solve the problem?

No, it just desaturates the greens! 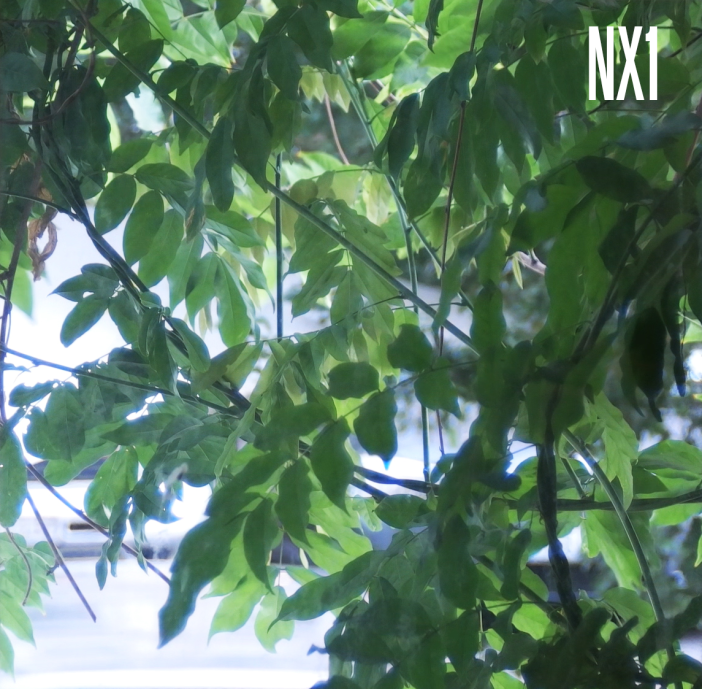 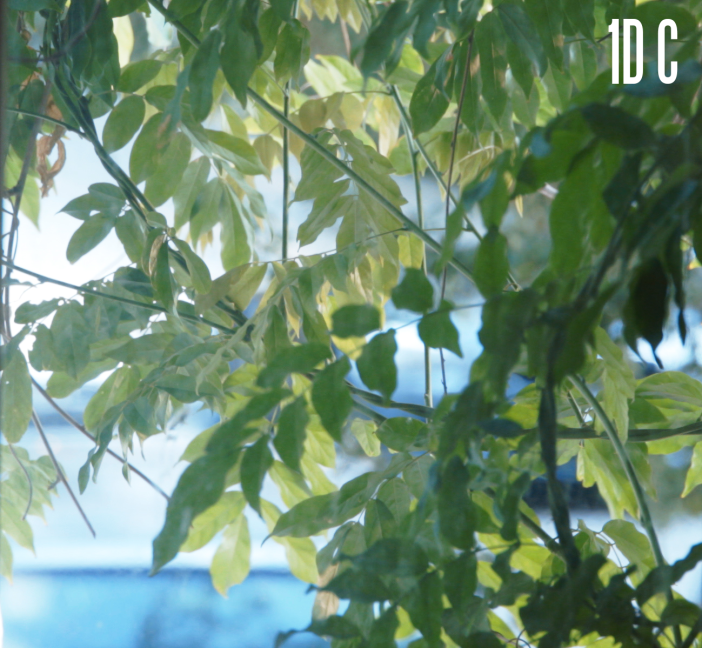 Where art thou yellow?

The subtle variety of colours present in the leaves outside the window on the 1D C shot (yellows, blue, even some brown) are just NOT THERE on little Sammy’s crayon drawing.

Notes:
The Canon 1D C was shooting Canon LOG but no colour correction was done in post to the image – only a contrast curve adjustment. The NX1 was shooting Gamma DR and this is not a LOG profile. It does however nicely bring up the shadows and prevents them from crushing.

It sounds like I am beating up on poor Sammy here. The NX1 is actually a stunning camera. It is just that the 1D C and Canon’s colour science is something else entirely. It comes from Planet Good.

Does the same issue persist with the Standard JPEG picture profile on both cameras? This is the default setting for 4K video as well. So I turned Canon LOG off for the next shot and used the Standard profile. Sure enough the same difference is evident here as well – clearly the JPEG engine and colour science are more pleasing to the eye on the Canon. 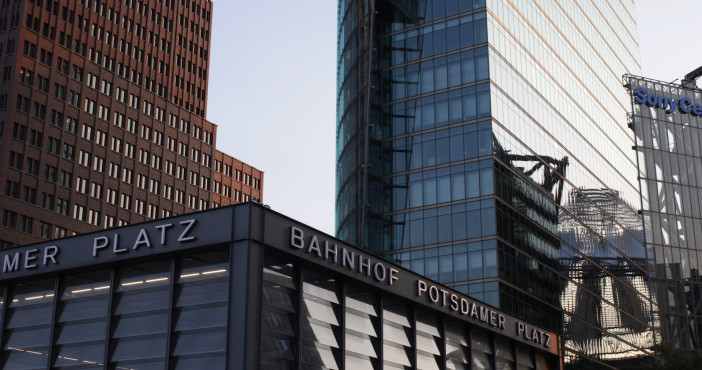 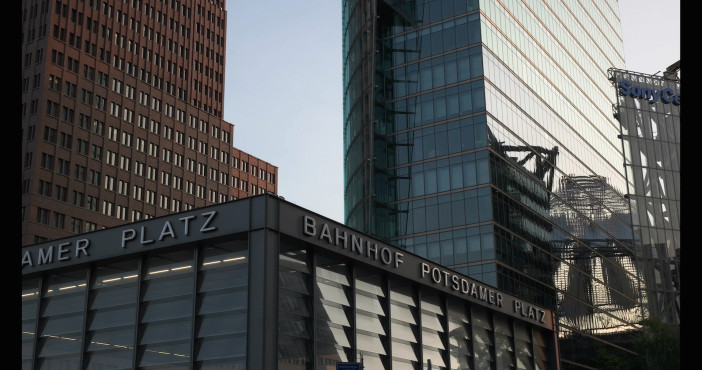 The NX1 shot without any work in post has a slight yellow/green bias like a haze over everything in the image.

Look at the grey-blue steel of the Potsdamer Platz train station entrance for example. In the NX1 shot the blue hue is replaced with a greenish grey. The same has happened with the blue glass building next to the Sony Centre. The windows have shifted to green. The red brick building is warmer on the Canon shot which is perhaps the most significant thing of all because the same thing happens with faces and skin – they look healthier on the Canon.

Both cameras were set to the same white balance and “out of the box” picture profile settings for this shot. No tint adjustment in-camera! In some ways the NX1’s shot here felt ‘hyper-realistic’ but it is also less cinematic. It was exactly the same with colour from the GH2 vs the older Canon DSLRs of the time. The GH2 had a green bias, somehow capturing more green than anything else, whereas the Canon was either A – more balanced to begin with or B – capturing more of the spectrum or C – compensating by boosting reds & blue.

I think the 1D C is hands down the most pretty camera for colour outside of shooting raw. The Digital Bolex is incredibly organic and analogue but only up to ISO 400. The 1D C crams all the subtleties in no matter what the subject or the light. Even though it is an 8bit codec it looks like you are viewing 14bit raw files (only you can’t push them around as far, naturally).

Samsung take a heavy handed approach to image processing with both their TVs and cameras. This is most apparently when it comes to resolution.

The NX1 is an insanely sharp camera.

When sharpness is dialled down on the NX1 to -10 in the picture profile as far as it will go, this is still the equivalent of applying the Sharpen filter in Premiere to Canon LOG footage at +40. 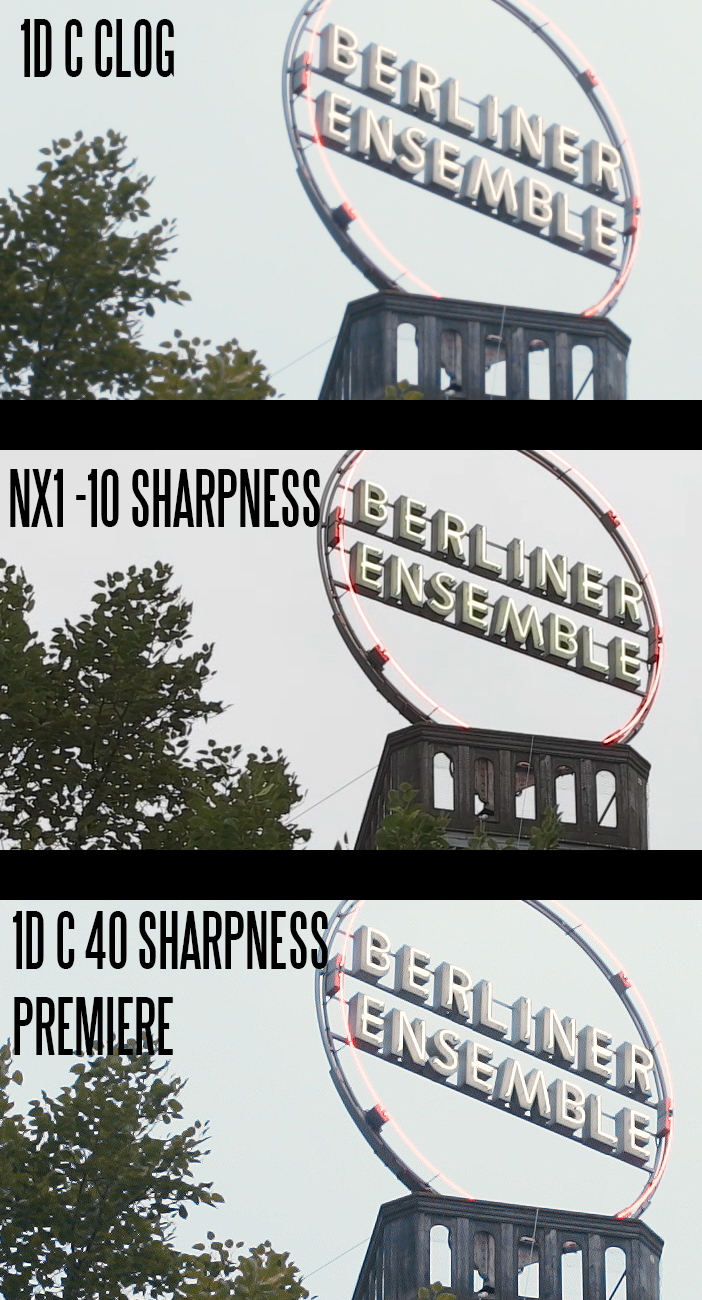 With both cameras being 4K neither of them lack for resolution in the ‘real world’ to say the least! But I prefer to have a softer baseline from which to work up from in post, because it is more flattering of faces.

In the days of 1080p Canon deserved the criticism for having a soft image – because it wasn’t just soft. It lacked for detail, looked like standard definition and was binned or line-skipped (with resulting problems like moire and jaggies). However the 1D C’s 4K works like a Red camera does with the maximum detail recorded and left to user preference in post as to how much micro contrast and edge definition is actually revealed.

The 1D C’s “soft” 4K output is important for a regular audience and not just for pixel peepers. A 4K file which is too sharp will alias more (more jaggies) when it is automatically scaled to fit a 2.5K or 1080p screen. Merely by watching 4k footage on YouTube on your 1080p TV or 2.5K iMac screen, this is evident. You can also try downloading some 4K footage from the 1D C and NX1 to your Mac, press space bar or play full screen in VLC player… the NX1 footage looks more digital as a result of that over-sharpened 4K image being quickly scaled down to fit on the display the 1D C maintains smooth edges on fine detail.

To the Samsung NX1’s credit, it is certainly a sharp camera when for so long we were complain how soft line skipped 1080p was!! However I have always maintained that the big advantage of 4K is not resolution alone. It is the fact that it acts like a larger highway from the sensor to the memory card.

4K eliminates the mass binning of image data on the sensor and 4x more of what the sensor sees actually makes it onto the card. This means your 1080p in post actually originated as a full pixel readout on the sensor and very little was lost in a ‘dumb’ way (like line skipping) and the scaling can be done in post very intelligently with a lot of computing power behind it. In this way 4K opens the door to very very high quality 1080p with 10bit luma & 4:4:4 colour sampling if you use the right workflow – as well as improved dynamic range from what we had before with the rather thin and clipped 1080p images from line skipping.

Dynamic range is similar on both the 1D C and NX1 but the Canon LOG profile of the 1D C means more of it makes it into the final file. You can access more of it in your grade. The NX1 tends to clip the highlights more suddenly and the darkest blacks are more compressed by the H.265 codecs than they look on the 1D C though both do have some banding in the very darkest shades.

I don’t shoot charts but from my half a year long experience of dealing with the footage I rate the 1D C at approximately 12 stops and the NX1 at 10.5 to put the difference into numbers.

The Canon colour science I can only describe as magic. It seems to be able to combine warm and cold tones in one image that no other 4K mirrorless or DSLR camera is capable of in the same way. It has an extraordinary sensitivity and wide colour space. I am sure the internal 4:2:2 codec helps as well as does the 500Mbit/s bit rate. The 14bit sensor is either the primary driver of all of this or merely the icing on the cake. Either way the 1D C’s image is utterly stunning and it really was worth $12,000 from that point of view. Now it can be had for as low as £3500 on eBay. Consider it.

The Samsung NX1 is also a mega bargain though and more accessible at $1299, which much smaller file sizes for 4K. It is a different class of camera though. Despite aiming high into enthusiast territory it can’t shrug off that consumer DNA in terms of image processing which hypes everything up too much. The Samsung NX1 has a “bang” to colour that prioritises saturation but it amps everything up so that different hues seem to bunch together and the lack of a LOG profile means you can’t quite reign it in. The results actually look impressive much of the time. Like a crayon drawing, there’s a beauty in the vivid simplicity. But when you see the 1D C, you go “ah”.

The 1D C is clearly capturing 3x the variety and 5x the subtleties – there’s just more colour information in the 4K files. Even looking at the ultra flat Canon LOG image you can see the clear separation between hues and lots of nuances.

Aside from sensor size and low light performance from ISO 1600 onwards, where the 1D C is obviously superior, the biggest difference is definitely colour.

Oddly enough I loved the vivid tones I captured in Lisbon on the Samsung NX1 back in December, and still do.

What this shows is just how incredible the Canon 1D C is, because by no means is the NX1 bad. It still has some of the nicest looking punchy Rec.709 colour straight off the card that you can get for the price. It just does not have the subtleties of the 1D C.

So while you are considering that second hand 1D C, do not whatever you do think less of the Samsung NX1.

In my next 1D C vs NX1 article we’ll look at what they are like to actually shoot with and use.