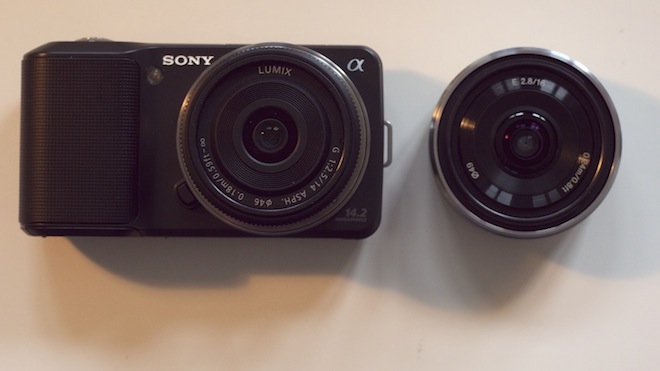 I just started experimenting with free-lensing – holding up glass to a camera by hand, and moving it around for focus, tilt-shift effects and flare.

The Sony NEX cameras are perfect for this because the E-mount (also featured on the FS100 and F3) has a very short flange back distance. I even tried my Micro Four Thirds pancake lens on the NEX 3.

It works nicely – a very wide angle image and capable of quite a shallow depth of field, infinity focus and macro (depending on how you move it back and forth relative to the sensor with your hand).

There are not yet any adapters on eBay yet since the focus and aperture in Lumix pancakes is controlled 100% electronically. Even the focus ring is fly-by-wire so it has no effect unless powered up and connected to a Micro Four Thirds body. But for tilt-shift and free-lensing the Lumix pancake is great since it the aperture remains wide open at F2.5 and you can focus with your hand. Somebody should make a tilt-shift adapter for this combo!

Of course to have a fully functional adapter for Micro Four Thirds lenses on the NEX E-mount the manufacturer would need to figure out the electronic protocols and convert the NEX body protocols into Micro Four Thirds instructions. Very complex and probably impossible to do without documentation and support from Panasonic’s engineering team, though Birger are doing it with Canon lenses. 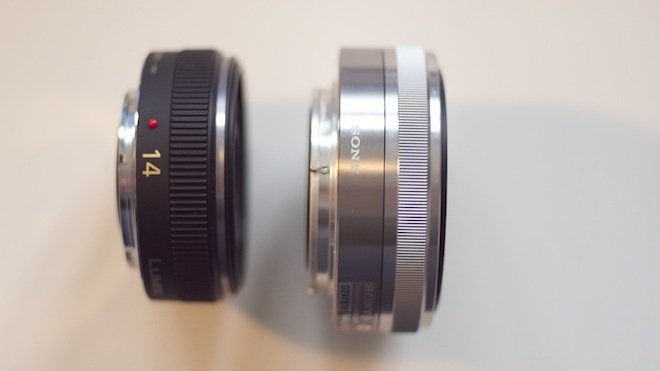 Still a 14mm F2.5 on a APS-C sized sensor was quite an appealing experiment – it’s roughly a 22mm equivalent wide angle – wider and faster than the 16mm F2.8 Sony pancake.

It covers the whole sensor just about with a slight light fall off. What’s interesting is just how extreme the distortion of the image is without the electronic image correction of Micro Four Thirds bodies. The optics really are very compromised on their own. But it’s a sharp lens, even wide open at F2.5 and very contrasty.

This was a fun arty experiment and not 100% practical but I am interested in some of the results it’s capable of producing. If anything it was interesting to test the limits of the lens and see just how much in reserve the Micro Four Thirds lenses have in terms of coverage and distortion on a non-Panasonic APS-C body. The answer is not a lot but that’s to be expected from a lens which is designed to be as small and as light as possible, which is the whole aim of the Micro Four Thirds system.