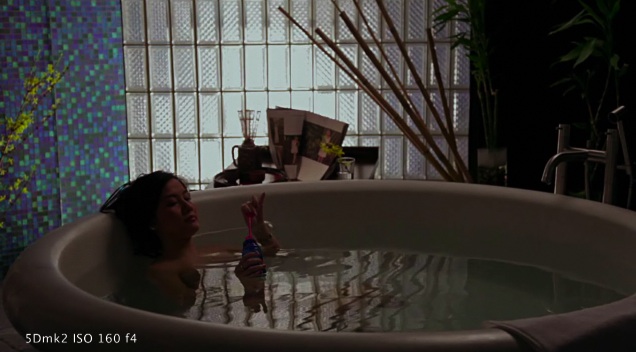 The first episode of Zacuto’s Great HDSLR Shootout versus 35mm film aired yesterday. Here are my thoughts on all the first episode and all cameras involved. It is very exciting stuff. If you haven’t seen it yet I recommend you check it out before reading further. I won’t give away the plot in it’s entirety – rather talk about some things which stood out for me.

“Wow” – the GH1 looked good on the bathtub scene 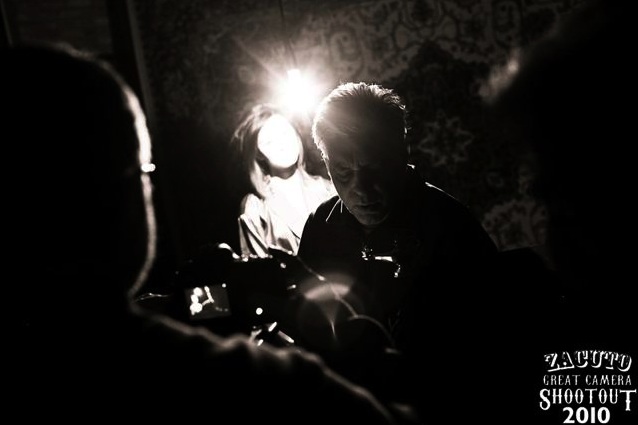 The little Panasonic appeared contrasty and sharp, with a wow factor in the first test – clearly a winner in some of the DPs eyes, eliciting surprise from the audience. The GH1 does resolve more detail in shots like this than the Canons (5D frame above – you’ll have to watch the episode to see the GH1’s result!). A little over-sharpened maybe, but it’s definitely resolving more from the lens and more of it gets through the video processing algorithms. Video processing is an area Canon need to improve, and DIGIC 5 should be the answer.

No tweaking the GH1’s picture profiles

The shootout had Canon’s tech guru Tim Smith to advise on picture profiles, but the GH1 went through on default settings. There was a comment – and I don’t know if I should read too much into it – that Bloom couldn’t optimise the GH1’s picture like he could the Canon, and yet the GH1 has sliders for contrast, sharpness, saturation and noise reduction under each picture profile. Were they overlooked? Bit of an oversight there, and the dynamic range test chart for the GH1 was hideously blurred and compressed. Not sure why – this was glossed over pretty quick. I don’t think these oversights had any impact on the all important result though, and it’s reasonable to expect some mistakes in a test as ambitious as this one.

35mm film (especially the Kodak stock) looked great on all the tests, because film has a large dynamic range. Highlights blew out more quickly on the HDSLRs than on film.

One thing I’d be interested to know is how this was corrected in post for the HDSLRs. Because if you underexpose the HDSLRs compared to film but keep the ISO low, you could save blowing out the highlights and hopefully keep enough shadow detail due to the low ISO and low enough noise, to really boost the low end in post – increasing the exposure of mid-tones and shadow areas.

The results of the bathtub scene in particular I am sure could be made closer to film than just the basic settings and numbers were capable of giving them, but not much was said of their process in the back room.

Much of the lower latitude of HDSLRs is down to the video processing and compression rather than the sensor. In fact, in raw (stills) mode on a full frame sensor like the 5D Mk II, the dynamic range is absolutely huge.

What about the real world? It depends on what you shoot, how you change the footage in software and also what picture profile is used (the GH1’s lack of tweaking hurt it in this regard). With scenes shot at even brightnesses across the entire frame, even the GH1 has enough dynamic range and latitude to produce as good an image as 35mm film, with lots of subtle gradients ready to be ruined by H264 web compression!

The latitude test really shows the need for a greater future improvement in digital video processing technology than sensor technology. The HDSLR sensors are absolutely amazing compared to what we had 10 years ago at the dawn of digital video, but even the snazziest and cleverest MPEG variants of video compression has a long way to go if it is to compete with film especially in delivering content over the web.

We all know the 5D is capable of some very nice images and it takes some beating for shallow depth of field. But there is less difference than expected when it comes to the real world tests. So the price difference in terms of video alone, between the 5D Mark II and Canon 550D / T2i is astonishingly large considering the relatively small different in performance.

The 7D did very well in the test, but the 5D certainly lost much more from it’s considerably better sensor in the video processing pipeline. In the future once Canon get the video processing sorted out, only then will a full frame sensor will be able to unfurl it’s wings.

It does seem that a small yet high resolution sensor works well for video. 22MP to 2MP in terms of the 5D Mark II – well, you’re binning a hell of a lot of resolution there. So it’s resolution has absolutely no advantage in that regard for video. Panasonic said in interviews recently that they recognise this, and are attempting to cap their cameras, such as the future GH2 at just 12 megapixel partly to lessen noise and partly to help video, a little like Nikon are doing. I appreciate this approach.

A smaller crop sensor compared to full frame will always have one advantage over cameras like the 5D Mark II… With the same focal length lens, more detail is resolved from the lens on a crop sensor than on full frame – whereby such a lot of detail is lost in the greater downscaling process.

State of the HDSLR union. Panasonic and Fuji representatives in the audience.

There is a comment on the narrative that both of these companies had experts in on the test. Fuji’s presense may be explained by the use of Fuji 35mm motion picture film on the Arriflex camera.

But as the Fuji representative (complete with fetching Fuji branded jacket!) looked on at the fabulous imagery from rival camera manufacturers knowing full well how many sales these cameras have garnered, could Fuji have had another reason for their involvement? It is not unusual for company experts to go on fact finding missions like this to reinforce research and development of new products and concepts – products like the first Fuji video DSLR.

The presence of Panasonic’s representative meanwhile, is even more intriguing. Clearly this is related to the GH1 being in the test, and Panasonic have always been interested in digital filmmaking and professional video products ever since the DVX. But Panasonic are primarily a consumer A/V electronics company that sees professional digital video as a market which is coming more and more in line with their core electronics business – as such products get more and more electronic, so they can offer more to the market in terms of technology.

Optically they have a good partnership with Leica, as good as Sony do with Zeiss. Panasonic’s own lenses are also improving at an incredible rate – some of the technology inside the 14-140mm GH1 kit lens is entirely revolutionary and not seen before. Sony’s own video lenses aren’t too shabby either. But in terms of the professional filmmaking market, do they realise what potential a Leica or Zeiss cine lens has for their HDSLRs in the industry? Massive. And not only that – glass is where the biggest profit margins are.

Meanwhile on the electronics side, it is the Lumix G team’s stated aim to make an entirely electronic camera without any moving parts, and in interviews the product manager from Japan continuously states that a global shutter is a ‘dream’ of his. Could Panasonic’s presence at the test indicate a greater future involvement with pro video customers and the HDSLR filmmaking market?

I sure hope so, because Canon’s approach has been considerably more involved thus far and are pretty much out on their own in the pro-DSLR video market. Panasonic just haven’t exploited the marketing of the GH1’s video mode, in the way Canon are with the EOS range, and they have been hands-off in terms of communicating with filmmakers and professionals – at least in public anyway. They did get Philip Bloom to film on the GH1 back in April 2009 for a UK press launch event, and that seemed to be it. Since then, influential professional filmmaker after professional filmmaker has fallen into the hands of the 5D Mk II.

Canon meanwhile have kept updating the 5D with video specific firmware updates, and yes – it needed the functionality (especially manual control) to compete – but it’s still quite a brave thing to do on a camera which is mostly bought by stills photographers. I’d like to see greater involvement in the future from Panasonic.

At least their involvement thus far, whilst low key has been greater than Nikon‘s!