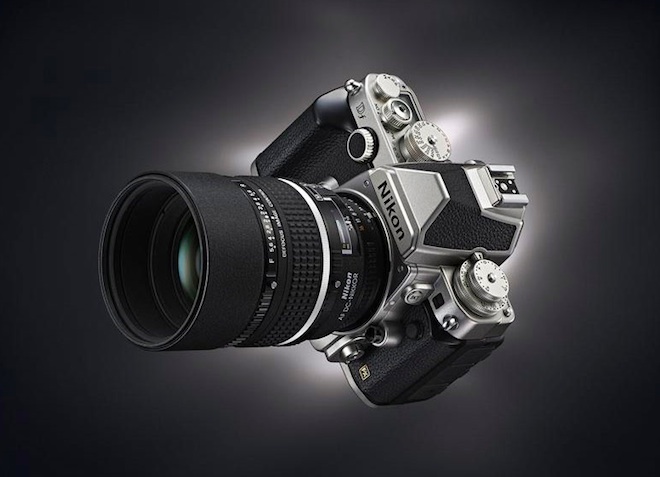 So now we have the truth of the way manufacturers think about DSLR video.

Clearly the purist section of the photography industry wants to take us back to the stone age. Video quality has been very low down the list of priorities at Canon and Nikon over the years. And Olympus, and Fuji.

Now, even fashion accessories are prioritised above video capture as the Nikon Df dispenses with it altogether!

There’s definitely demand for retro ergonomics. The emotional and tactile response you used to get with a film camera has been sorely missing in the digital era. Nikon ergonomically have always been a cut above Canon in terms of emotional and tactile feedback as well as looks, despite a few silly quirks, and they have seemingly done a good job with the Df.

But with the consumer camcorder market suffering due to smartphones, companies who are seeing reduced sales at every corner should see artistic DSLR video as a chance to win back customers from smartphones.

That trend has been ignored in Japan but what has registered is the fragile and fickle demand for fashion cameras, a trend which stared with the Olympus PEN EP1.

I am all for cameras that offer good tactile and emotional response but the ‘fashion camera’ is not a viable product in itself.

In the modern world we’re inundated by that flat non-tactile feel you get from digital devices, which is why people have begun hankering for old film cameras with their mechanical emphasis. This is exactly what Nikon want to offer with the Df; a pure photography experience with no distractions (like a film camera). It also looks pretty nice. 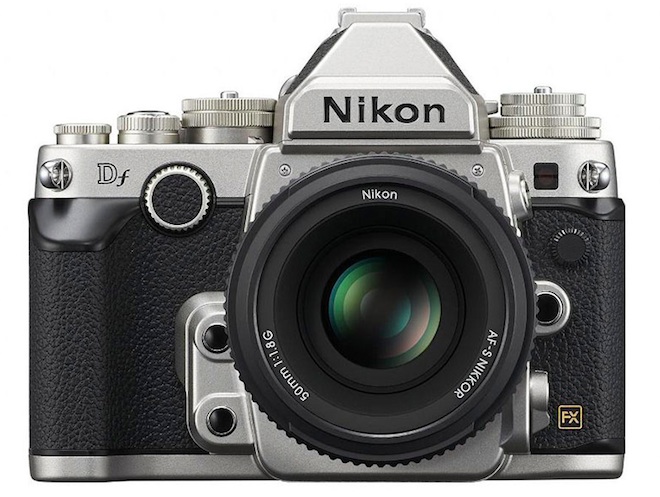 I’m all for that but in my opinion this won’t be a lasting trend, partly because the Df doesn’t look authentic or serious enough and partly because hipster culture will kill it as a creative tool.

When I’m walking the street with a Df or X100S I don’t want to feel like I’m a posing idiot. What creative person would rather be regarded as a rich tourist or fashion victim instead of a real photographer? When everyone has ‘fashion cameras’, the trend will be self defeating.

I’m actually all for tactile response when shooting, and good looking design. I often wish the Canon 5D Mark III didn’t feel so plain, flat and uninspiring to use. I wish it wasn’t so generic to look at.

But you’ve got to combine form and functionality so they’re balanced and not let form take over as is the case with the Df.

Would the future-facing Panasonic GH2 had been a better camera if it featured a leather trim and a steel top plate? I think so. Would it have been better if it featured those things at the expense of video and mirrorless lens mount? Hell no.

And yet picking up a plastic camera vs a metal one has a different emotional consequence, which shouldn’t be ignored.

People associate certain tactile responses to certain life events. Picking up a steel film camera for a shoot in the morning, you associate the feeling of cold metal with a tool which is fresh for the task and later you associate the warmed up grip to the act of having used the camera. I am sure there’s some innuendo in that statement somewhere! But the fact is, the emotional side of taking pictures is definitely important and is hard to quantify on a specs sheet. Emotional and tactile feedback adds texture to the experience of picture making.

It is true I don’t get the same emotional kick out of using the 5D Mark III for stills as I do the Fuji X100S, Sony RX1 or Olympus OM-D E-M5. But there’s really no such thing as a retro camera market. People bought into the Fuji X series because the cameras as a whole were compelling in terms of functionality not just design. 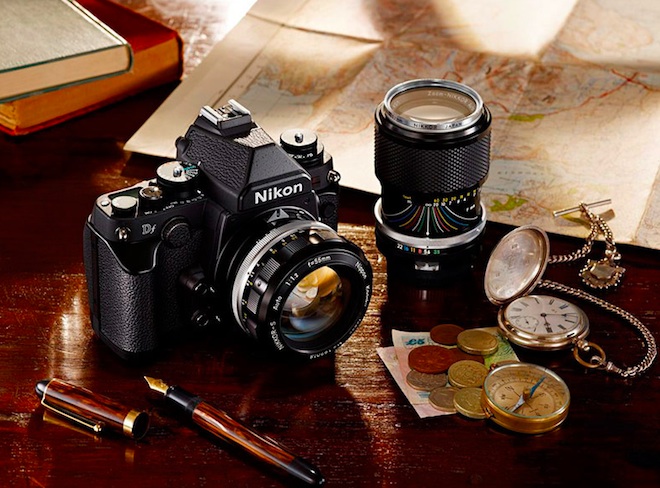 A lot has to do with ergonomics, but sadly Nikon have made some very strange decisions on the Nikon Df, which mean I won’t be buying one. The locking dials are a disaster. The whole purpose of separate dials for controls is so you can change them quickly, with the flick of a single finger. Also just because a camera offers a great optical viewfinder experience doesn’t mean to say it should come at the expense of live view, which is very important for tripod use and video.

The small battery and rather naff LCD top plate all point to it being orientated around the optical viewfinder rather than live view. Truth is, when forced to choose one, I’d prefer live view, and live view doesn’t have to exclude the use of a viewfinder. The Sony A7R with EVF and articulated screen is the better camera for me.

For more on the Df itself, Andy Westlake has an expert hands-on at DPR here.

So the Df reveals a kernel of truth about Japanese camera designers and their approach to DSLRs as a whole.

Apparently video is a distraction.

DSLR video is not a distraction it’s a way of life for some.

There’s an element of an old man designing a modern camera in the Df. It’s a bit of a dinosaur in some ways.

Nikon need to get with the programme!

There are some Nikon cameras which have the technical means to produce a very good video image like the Nikon D5200 because of the high quality sensor output – but even this was given a roughshod video mode treatment, where you can’t even change the aperture in live view mode and can’t select a dedicated video mode on the mode dial.

How much effort would it be to have just ONE model in the Nikon range that was orientated around videographers instead of photographers?

With the photographic market shrinking, again due to smartphones, Nikon’s refusal to diversify and increase product uniqueness will be their undoing. Let’s face it – the Df is a DSLR with fashion trimmings. It is a fashion item. I find it unbelievably stupid in the extreme that an imaging company like Nikon would prioritise the design and release of a fashion item before the design and release of a video camera.

There’s no technical reason to have video disappear altogether on the Df. It’s a philosophical reason with a dollop of shitty marketing thrown in for good measure.

The good news is you’re not missing much.

Full frame video quality on the flagship Nikon D4 with which the Df shares the same sensor and image processor was amongst the worst around at any price point let alone $6000.

Photographers can embrace video with no distractions

I can actually appreciate why video is often given the heave-ho by purist photographers.

Video also benefits from dynamic locations, whereas photography can work with a completely still environment, like the Scottish Highlands in the Nikon Df adverts and a single photographer. A filmmaker might use the Scottish Highlands as a backdrop to a cast and crew but by itself it would look dead as a moving sequence. Put simply, filmmaking is a bloody nightmare, but the end results are absolutely worth it.

Understandably many photographers shy away from the elaborate logistical side of moving images but I have always preferred to shoot my own artistic portraits of time and place not with stills but with moving sequences, because I find them more powerful and more emotionally satisfying. Purist photographers don’t seem to embrace the fact that you can shoot video in the same way you approach stills.

Simply by using a tripod and setting up the composition you can hit record and find a way to let movement and sound add to the emotional impact of the visuals. It doesn’t NEED a rig. It doesn’t NEED a crew. It doesn’t even need an audio recorder. It just needs a great music track, great light and an emotional engagement in handling the material.

In not appreciating this and choosing not to implement video to on the Nikon Df, the engineers are arrogantly assuming that video has less artistic worth than stills and making the decision above customers heads about how they should use the camera.

I have no problem with a DSLR which is aimed purely at the most purist of photographers, as long as video exists on other models. The problem is, this purist stills philosophy has f***** up video on every single camera outside of the GH2 and GH3 since the advent of live view.

Moving images have been a consistent low priority at all the manufacturers aside from Panasonic, especially Nikon, Fuji and Olympus. Since the advent of Cinema EOS it has also been a low priority at Canon with DSLRs, depriving an entire mass market of progress in video quality.

Customers demand to be treated with parity, regardless of whether they have an artistic bias towards stills or video. Nikon will undoubtedly reduce sales of the Df by not including video.

When both exist on a camera, it is up to the customer to choose which one they’re going to use in their creative pursuits and up to the manufacturer to provide both to a high standard.

At Photokina 2012 I met a top Fuji representative. I passionately explained that the video mode on the Fuji X Pro 1 could be so much better. I told him that even for casual point & shoot uses, stills photographers would be unable to get a usable image from the video mode under most European interior lighting and almost all street lighting which requires 25p, 50p or a 1/50 shutter speed. I was met with the most indifferent scowl I’ve ever seen.

Fuji still doesn’t take video seriously, treating it purely as a marketing thing – a badge on the box – a line on a specs sheet. The message from artists and filmmakers isn’t being taken on board. The new Fuji X100S offers the shoddiest video mode on the market. They may as well have kept it off as Nikon have done.

The Nikon Df with basic 50mm F1.8 kit lens will cost $2999 in the states. That’s considerably less than the D4 for the same image quality.

However a straight currency conversion makes that £1862 + VAT in the UK and Nikon are charging £2200 + VAT.

I’d like to hear Nikon explain how that frankly weird £350 mark up per unit is justified. The Df street price will be £2749 inc. VAT!

That’s $4425 for a camera with no significant extra functionality, ergonomic or image quality benefit over the Nikon D800 or D600.

I can’t see existing owners snapping one up at that price.

It is purely that emotional aspect of using the camera, falling in love with the tool – and you can get that for £1199 with the Fuji X100S. A camera lest we forget that’s even jacket pocketable.

Blackmagic’s cameras are not price-inflated for the UK market. So why Nikon with their much broader dealer access and higher manufacturing volumes?

Panasonic will address this with the GH line and progress well.

But the big Canon / Nikon disinterest in DSLR video gives Blackmagic enough of a business foothold to challenge the professional camera sector in a few years, where Canon and Sony make most of their money (Canon C300 and Sony F5). What Canon seem to misunderstand is that the two markets can happily coexist and that the hobbyist video market does not at all compete with the professional one. Canon don’t need moire and aliasing to divide and rule the market.

What a confusing mess this camera landscape has become.