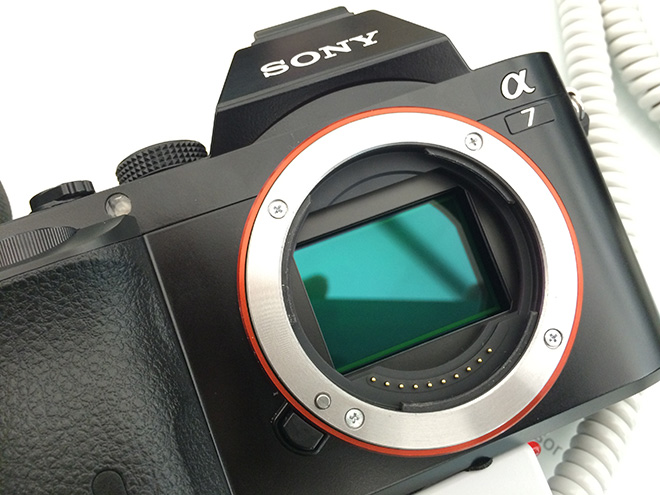 Quite unexpectedly today at the Sony Centre at Berlin Potsdamer Platz, demo units of the A7 and A7R were available to try including the more video-orientated RX10.

The dilemma over which to pre-order for video is over!

First it’s clear, Sony have finally got the ergonomics right. The decision to axe NEX ergonomics on this range and evolve the Alpha controls has paid off handsomely.

Another plus point – they’re all worldcams and PAL / NTSC switchable. 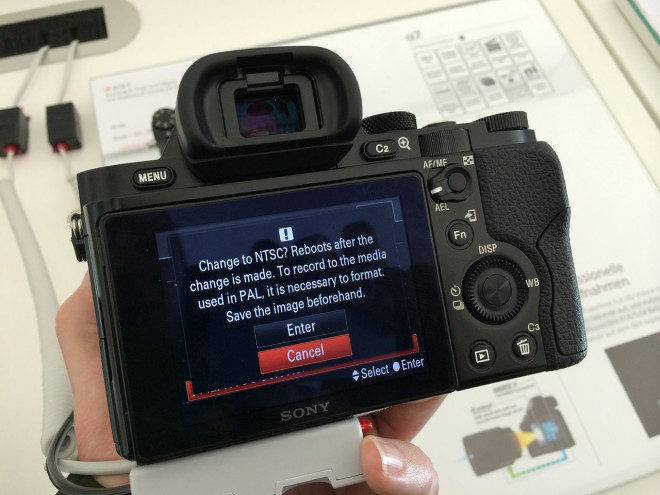 You have to format the memory card between PAL and NTSC so you will ideally need to keep your PAL and NTSC memory cards separate in your bag when travelling between regions.

This is probably an inconvenience introduced by AVCHD. I wish Sony would just use Quicktime MOV for their video recording on stills cameras. The MP4 option is still of low bitrate and isn’t full 1080p.

Although the Sony A7 and A7R are extremely small cameras compared to a full sized Nikon D800 or Canon 5D Mark III they don’t feel small.

That it is to say they have proper grips and spacious control layouts.

Sony in the past with cameras like the NEX 7 and FS100 have really piled on the buttons and it has resulted in a more crowded and less instinctual shooting experience. For example having distinctly different control assignments to buttons very close together which feel identical to the touch. Nikon with the old D3 had the right idea – when two controls were close together they distinguished them by feel. Sam Morgan Moore told me the best experience he’d ever had with a camera was with the D3. You can feel your way around it instinctually without needing to look at where stuff is – changing controls at lightning speed. I couldn’t do this with any Sony cameras prior to the RX1. 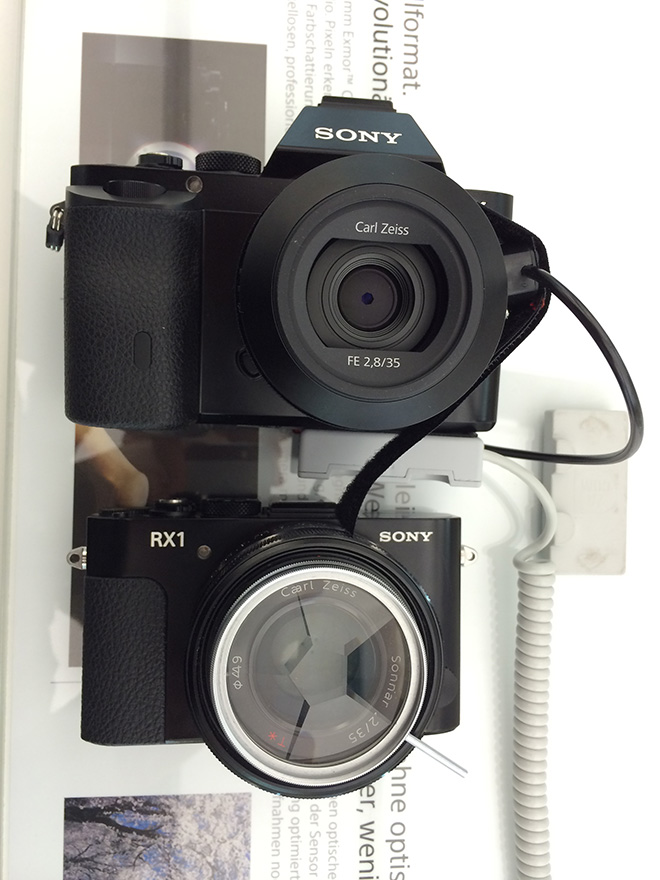 Above: the Sony A7 and my RX1 with mirage filter!

Speaking of the RX1 – though not perfect, this was the genesis of the A7 and a great improvement on the NEX 7 which went before it. The RX1 ergonomics are carried through with aplomb to the A7 and A7R.

In terms of build quality both the A7 and A7R are similar but the A7R has an edge. Better buttons and an alloy front plate.

The RX10 meanwhile has the build quality to justify the price. It reminds me more of the legendary R1 in terms of build than HX300. The Zeiss fixed lens especially has a very solid fit and finish, with buttery smooth zoom, focus and aperture rings. The only drawback in terms of usability I found with the RX10 was the speed of the zoom mechanism. It’s very steady but way too slow. 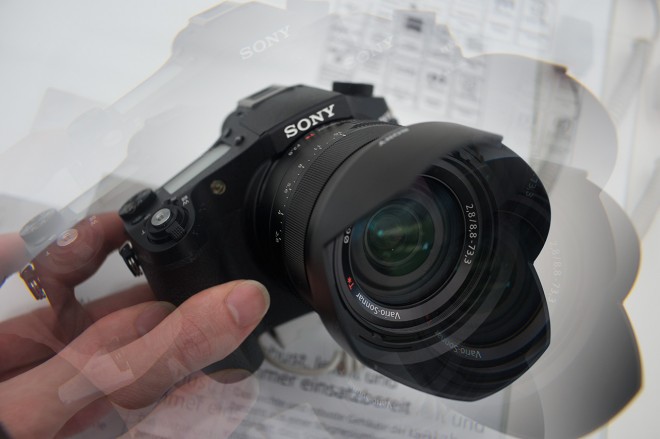 Above: the Sony RX10

In playback, happily Sony have seen sense and there’s no longer the separation of stills and video in the menus. Videos are shown alongside the stills you’ve shot.

Unfortunately the preview poster frame for videos is of extremely low resolution. 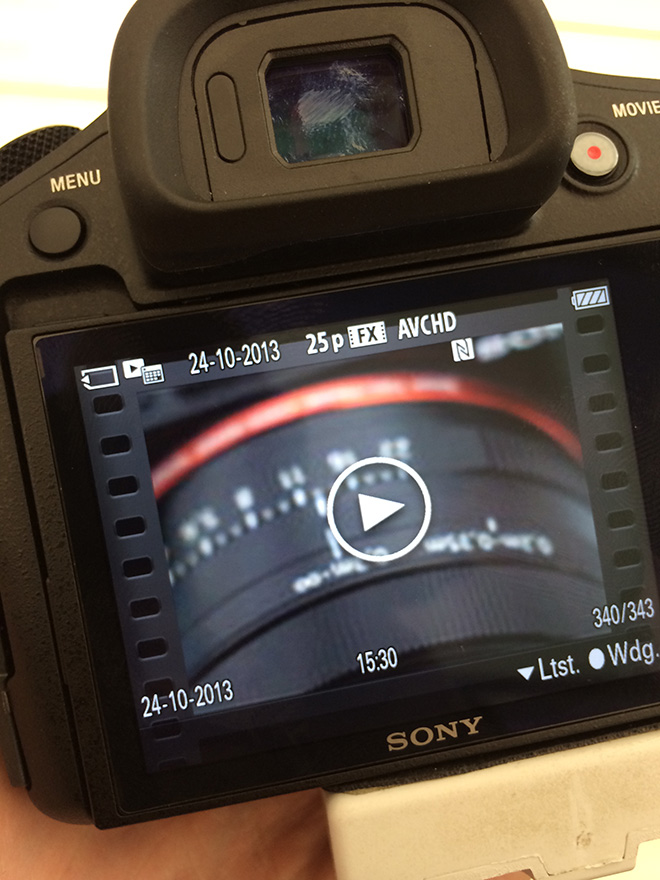 In terms of image quality from the sensor in video mode, the RX10 leads with the cleanest resolution. Detail is insane, thanks to the full pixel readout on the 1″ sensor. This is a 2.7x crop over full frame (think Nikon 1 series) and slightly larger than Super 16mm.

Thankfully the fixed lens is a very good one, with a constant F2.8 aperture. It is almost too sharp and you can invoke some moire at times, on a similar level to the GH3. But I think for what this camera offers in terms of the lens, built in ND, XLR add-on and form factor it is very good value for a money and a genuinely capable replacement for a pro video camcorder like the Canon XF105 in all but AF speed and the less capable AVCHD codec.

The big question though, is which of the full frame cameras to buy for video.

This camera has very decent performance, whilst not really troubling Blackmagic’s cameras or the 5D Mark III.

The A7 has too many issues for me to recommend it, so the A7R is definitely the one to get if you are interested in video. 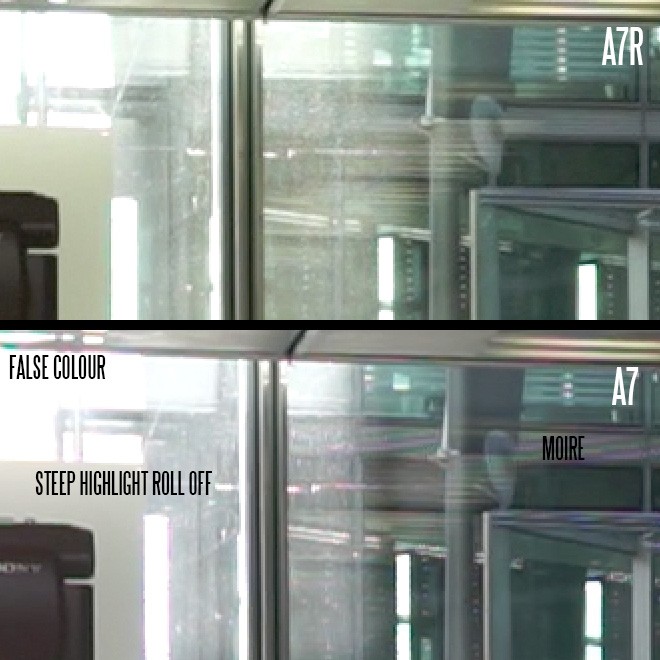 The RX10 is most detailed, followed by the A7R (disregard white balance, it is slightly off) and then the A7. 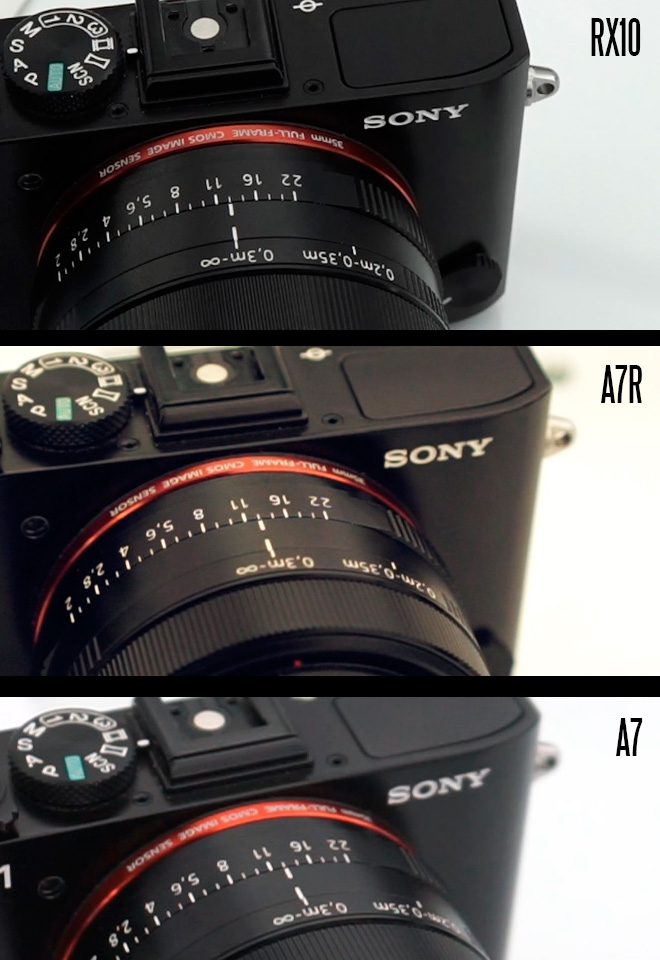 All cameras have some degree of moire & aliasing, though the RX10 is a massive improvement on previous Sony cameras with respects to this. The moire issues are disappointing but then cameras without moire and aliasing are the exception rather than the rule. Even the Blackmagic cameras have moire and aliasing. The A7R has a little more than those and certainly more than the 5D Mark III. The A7 is marginally improved on the older 24MP Sony sensor in the RX1 and A99 but it’s really an image processing thing – the sensor looks to be line skipping in a similar way to before.

I think the A7R’s video looks pretty similar to the Nikon D800E, which is no bad thing. HDMI is uncompressed and could be worth investigating this time out because it takes a more direct route from the sensor to the HDMI port than before. We will have to wait and see what the gain is like. On the D800E there’s wasn’t much benefit to using an external recorder despite it being advertised as uncompressed 4:2:2.

The micro-lens design on the A7R’s ‘new’ 36MP CMOS has been revised but I think fundamentally it does video in the same way as the D800E. The Sony A7R as a complete package is pretty unique. The only other full frame camera with mirrorless design and interchangeable lens mount is the new Leica M Type 240 for considerably more money. Video on the A7R is better. 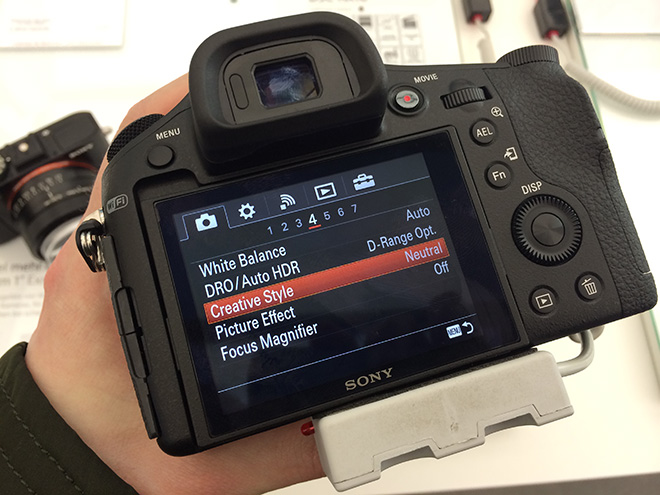 Above: the Sony RX10 menu system

The EVF is huge. Much better optically than the NEX 7.

The A7R is Sony’s best handling camera to date. Excellent physical control layout and a unique rear card slot with angled door. Both headphone and mic jacks, unusual to find on a small camera like this.

The sensor is the best in the stills world, and second best in the video world just behind the 5D Mark III. If you’re shooting raw video with the Magic Lantern firmware on the 5D Mark III of course the A7R won’t improve on that for image quality, but if you need the convenience of a compressed codec and don’t mind a bit of occasional moire and aliasing then the A7R does a great job.

With portraiture at close range and shoots at fast apertures the A7R will be good enough for most paid work. Only when you go wide angle or have a shot which demands more dynamic range will the raw video of a Blackmagic or 5D Mark III deliver a significant difference no matter what the mastering format is.

The mirrorless lens mount opens up all sorts of possibilities on this camera. I can’t wait to see if it’s possible to have a Speed Booster adapter which delivers a medium format sized optical system, and with Canon FD glass you have plenty of beautiful (yet affordable… for now) fast full frame primes used to their limits for the first time since the film days.

The A7 and A7R’s low weight and size is a genuine advantage over a full sized DSLR and Sony have done an especially dramatic weight reduction on the full frame lenses as well. The Sony 28-70mm F3.5-5.6 FE kit lens felt feather light for a full frame zoom lens. Then there’s the Zeiss 24-70mm F4 OSS for FE mount which isn’t much bigger.

The Sony RX10 is worth a serious look. It is a fantastic shot getter of a video camera, which packs in the features and could well appeal to Panasonic GH3 owners because of the built in ND filters, excellent resolution and superb F2.8 zoom lens for a similar price to the GH3 body on its own. I’m very tempted to get BOTH the RX10 and A7R. 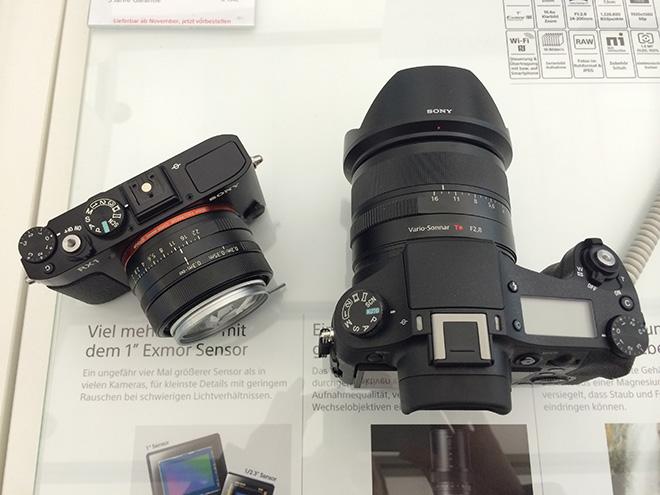 What would really light my fire though is a dramatic step up in video for future cameras, and I have no doubt it will come…

An A8R with 4K video and full pixel readout?

By current calculations, the future’s pretty bright for Sony.

Really interesting was that the Sony 10-18mm F4 for APS-C E-mount cameras COVERED the full frame sensor at 12mm. At the corners it isn’t perfect but this will be a unique lens on the A7R. 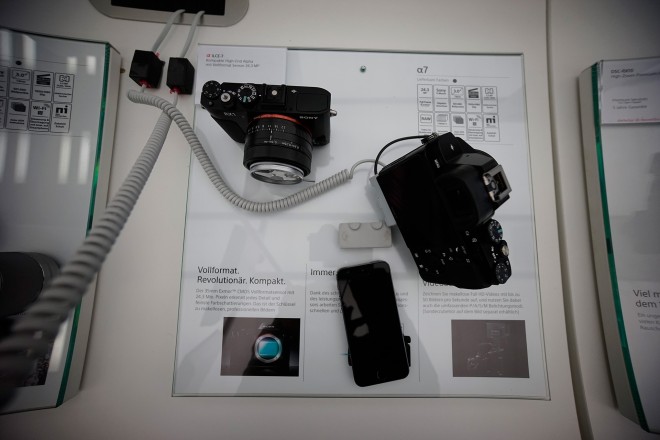 Thanks for the test, Ingo.