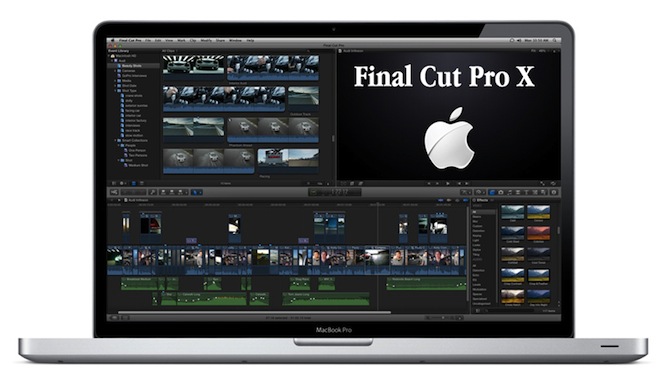 It is an absolute revelation.

With one click colour grading, Open CL and all new 64bit engine, no rendering, no transcoding, 4K support and able to take advantage of more than 4GB RAM for the first time, Final Cut Pro X has been rebuilt from a blank sheet of paper.

FCP’s original creator Randy Ubillos was on hand to demonstrate to the audience in real-time the new Final Cut Pro experience.

It is massively faster than the old FCP7. A real performer.

There are new features such as rolling shutter elimination, image stabilisation, person detection, colour detection and intelligent shot detection (automatically labelling a shot ‘wide shot’, ‘close up’, etc.) The ability to detect and recognise actors and shots is quite extraordinary and never seen in a NLE before.

Also the timeline has been completely redesigned. More on that down the page.

Final Cut Pro allows you to begin editing footage on the timeline before it has finished ingesting. There is no need to transcode footage. All footage, whether ProRes, DSLR H264 or AVCHD drops straight into the project and is available to edit immediately. Hugely timesaving.

There is a rash of other timesaving features like automatic colour correction and auto-audio clean-up (removes hiss, noise, spikes, etc.) to solve basic issues with footage.

Media management has been much improved. The intelligent detection of footage allows automatic grouping of clips to form scenes together in the media manager for easier access to media in an ordered fashion, according to the project. This is really great – so much better than the basic project management in current NLEs with their crappy bins and tiny thumbnails. There is also a Filmstrip View of clips allowing you to identify and find shots quickly.

Timeline intelligence has been improved. A key area. Apple dubs this a Magnetic Timeline. For example audio clips move out of the way if extended into the edges of other clips. It’s faster to use and harder to accidentally stuff up. There are no real video or audio tracks – it is more liquid now, with clip tracks appearing automatically as and when they are required.

FCPX is all about speed without compromising functionality.

It has a ‘clip connections’ feature which prevents accidentally knocking out synced audio and video, and allows the pair to travel around the entire app together. They can be processed together and stored as a pair. In fact you can no longer chop into media or punch holes in neighbouring clips by dragging one clip on top of another. Not sure whether this is good or bad since sometimes you want to do this – but the timeline does sound like a big improvement. Compound Clips is another new feature, like nested clips in Premiere and nesting clips is a one key-stroke procedure.

The UI has so much more over FCP 7! 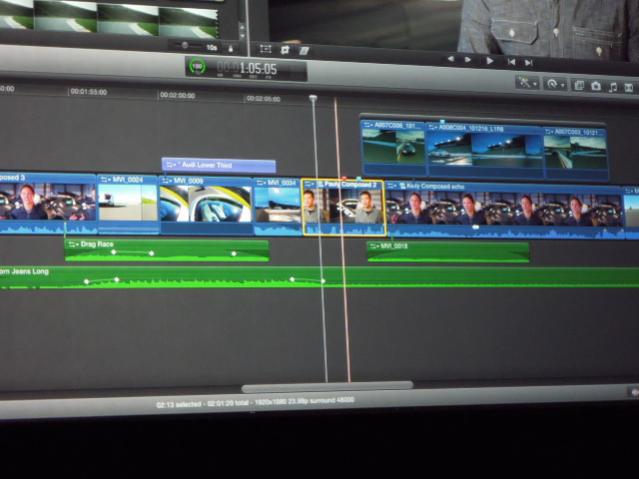 There are features now built by Apple that were previously clumsy plug-ins. DSLR users with dual-system audio setups will be glad to know that the ‘pluraleyes’ automatic sync functionality is now built into Final Cut Pro and works better than ever.

An Inline Precision Editing feature allows you to see the whole clip whilst making micro edits on the timeline. Auditioning is another major new feature. This allows editors to pair down their options and make decisions later. More info later on this since I am not entirely sure how it works in detail yet.

One of the improvements I like best about the new Magnetic Timeline is that clips can be altered in speed without damaging the rest of the timeline. Finally!! No forced rippling of the timeline or dragging the clip to the end of the timeline before changing it’s speed (and hence length). This was a crazily lacking part of the old FCP UI.

Instant Color Matching is also an amazing feature. This is essentially amazing looking colour grading at the single click of a mouse.

Final Cut Pro X will be available in June for $299 from the Apple App Store – what a deal.

A big thanks to Nino Leitner and Rob Imbs for a great live stream of the unveiling.