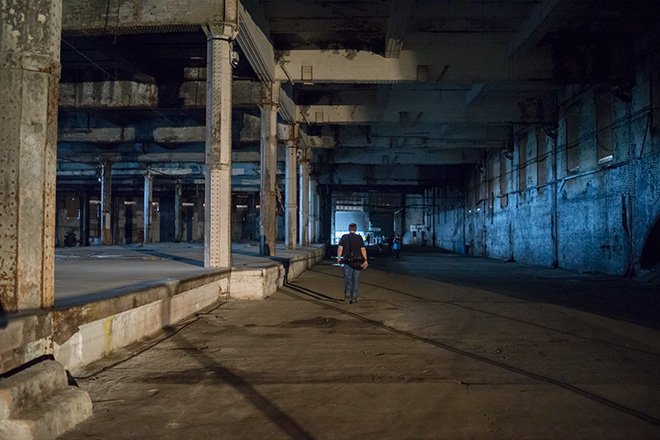 I was there and although I don’t usually review films on EOSHD this occasion warrants a few words.

If like me you think multiplex cinemas are tired and uninteresting, here’s an experiment which I think could lead to a future cinema genre. In the city where Dylan first went electric. A tantalising glimpse of cinema’s future… Maybe.

Half gig half film, staged in an abandoned railway depot in Manchester, Massive Attack played a live score while the audience (standing like at a traditional gig) were kettled into an area surrounded by screens and bombarded with imagery from Adam Curtis’s documentary film left, right and centre.

As a result there wasn’t a single focal point and you ended up looking into the eyes of the audience as well as the screens. That lent the experience a very eerie feeling of it being ‘a happening’ rather than a showing and you were all the time very aware of the reaction of the audience.

The film itself is fascinating. Curtis suggests that humanity’s attempts to change the world have come to an end. It is the end of heroism and the beginning of the management era. His startling worldview is that life has now become too complex to change and must instead merely be managed to minimise danger and risk.

That means risk management on an epic scale, reactionary rules and restriction of personal freedom in order to seal society off from the unexpected. Curtis uses the apt world ‘sarcophagus’ to describe a tomb being built by our politicians and managers to encase humanity, to protect it from itself.

The example in the film he used for this was a striking moment. The Chernobyl disaster. Workers were sent by the Soviet Union to clean up the disaster, and they knew they were going to die. These workers, suggests Curtis, represent the old world; a world of heroes and autocratic control. Yet they were there not just to clean up and to sacrifice their lives doing so but to build a sarcophagus around the stricken reactor. In doing so they provide powerful symbolism representing Curtis’s modern worldview. It works well, spine tinglingly in fact, and there’s countless examples of this throughout the stock footage he uses all the whilst backed up by one of Britain’s best bands.

Here’s how Curtis himself describes the film –

“It tells a story about how a new system of power has risen up in the modern world to manage and control us. A rigid and static system that has found in those images and sounds a way of enveloping us in a thin two-dimensional version of the past.”

It shares much in common with his recent BBC documentary in three parts, All Watched Over By Machines of Loving Grace, about the technology which was developed to improve our lives but actually controls us and has unexpected consequences.

Curtis’s film is closest any filmmaker has come to describing the modern world, why it is as it is and making sense of it. The event had a doom laden apocalyptic message too that is as exciting as it is frightening.

Whilst touching on simulated realities (think Disney World and the global financial system) Curtis uses a sequence of Hollywood film cuts where crowds and actors react in shock to a major catastrophe (such as the collapse of the Empire State Building) before leading into the inevitable – the very real events of 9/11 in New York.

But it is sometimes hard to weave in and out of such disparate and complex themes. Some of what drives his message is complex science and network theory. Usually these are the last things on the mind of a gig going crowd and most people were on their 5th can of lager before the event even began. Much of the crowd stood in stunned silence throughout, barely moving.

Another complex point he touched on was that ecosystems in nature self manage without outside interference, intelligent design or centralised control. If self-regulating systems are interfered with they bounce back to their natural state. It has long been a dream that humans would be able to live naturally in a self regulating society completely free of government control, but Curtis points out that humans are hierarchical by nature and society cannot self manage – leadership and submissiveness is an inherent part of human nature. Stronger personalities inevitably come to dominate weaker ones. Even on an epic scale strong countries seek to preside over small ones and communist countries break down and turn into capitalist ones.

Yet it is a system of self-regulation that has been set up for the financial markets by our politicians. Cheekily Curtis appears to put forward the idea of Bill Clinton attempting to have the US self-manage itself, whilst he was off under a table with Monica Lewinsky. 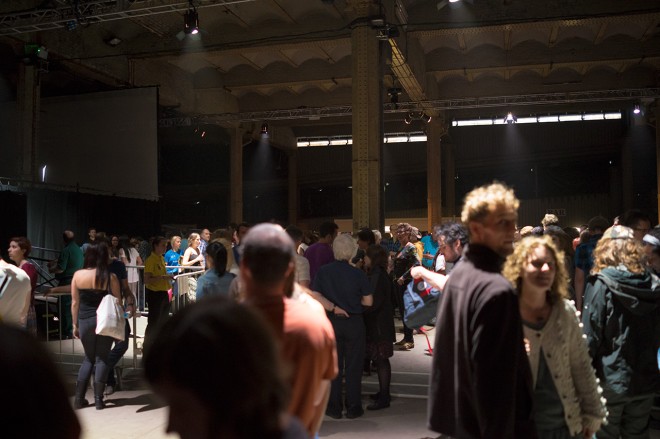 The Manchester International Festival mainly marketed the event as a Massive Attack gig, but it is actually an Adam Curtis film first and foremost. At a gig there’s usually a flow of energy from the audience to the band and visa versa but here the band were behind semi-transparent projection screens and the main flow was an intellectual one between screen and audience, with heavy emotional undertones.

The music was superb and an key part of the film but danceable it wasn’t. There were no Massive Attack crowd pleasers like Teardrop either, though singer Liz Fraser was there to lend hauntingly beautiful vocals. 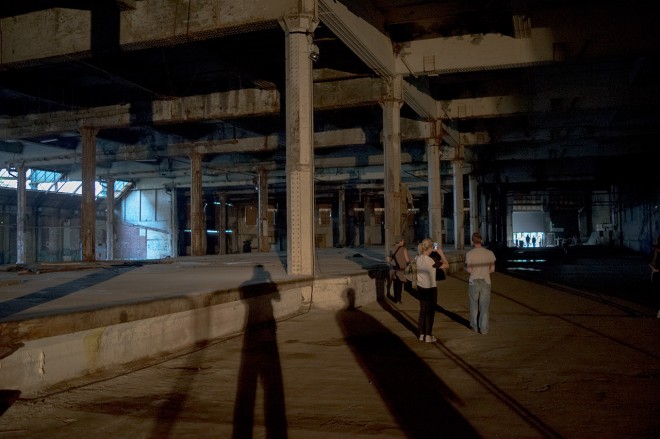 The film is demanding, sometimes confusing and required 100% attention, so no sooner had you begun to move, commanding imagery of a nuclear bomb or Putin would be on screen, the score would drop back, and Adam Curtis would begin narrating a doom laden theory. Clearly this isn’t mainstream stuff. It isn’t to everyone’s taste and some of the people who had come without any interest in Adam Curtis felt bored and unable to get into the mood or feel energised by it, just as some had shouted ‘Judas’ at Dylan’s first electric gig.

To some extent I sympathise. What the event could have benefited from, was moving even further away from the traditional idea of a gig and into the cinema space, which is where I think the idea has most potential…

Cinema has only changed on superficial levels since the 1930’s. The experience is much loved but there’s room for a new genre alongside the usual one.

Music and film have a lot of parallels and the intimacy of a gig, the fact it’s live – that for me points to a more involved cinema experience that doesn’t rely on 3D goggles and gimmicks.

What that might be, isn’t yet determined but no doubt this experiment is one step forwards to finding out.