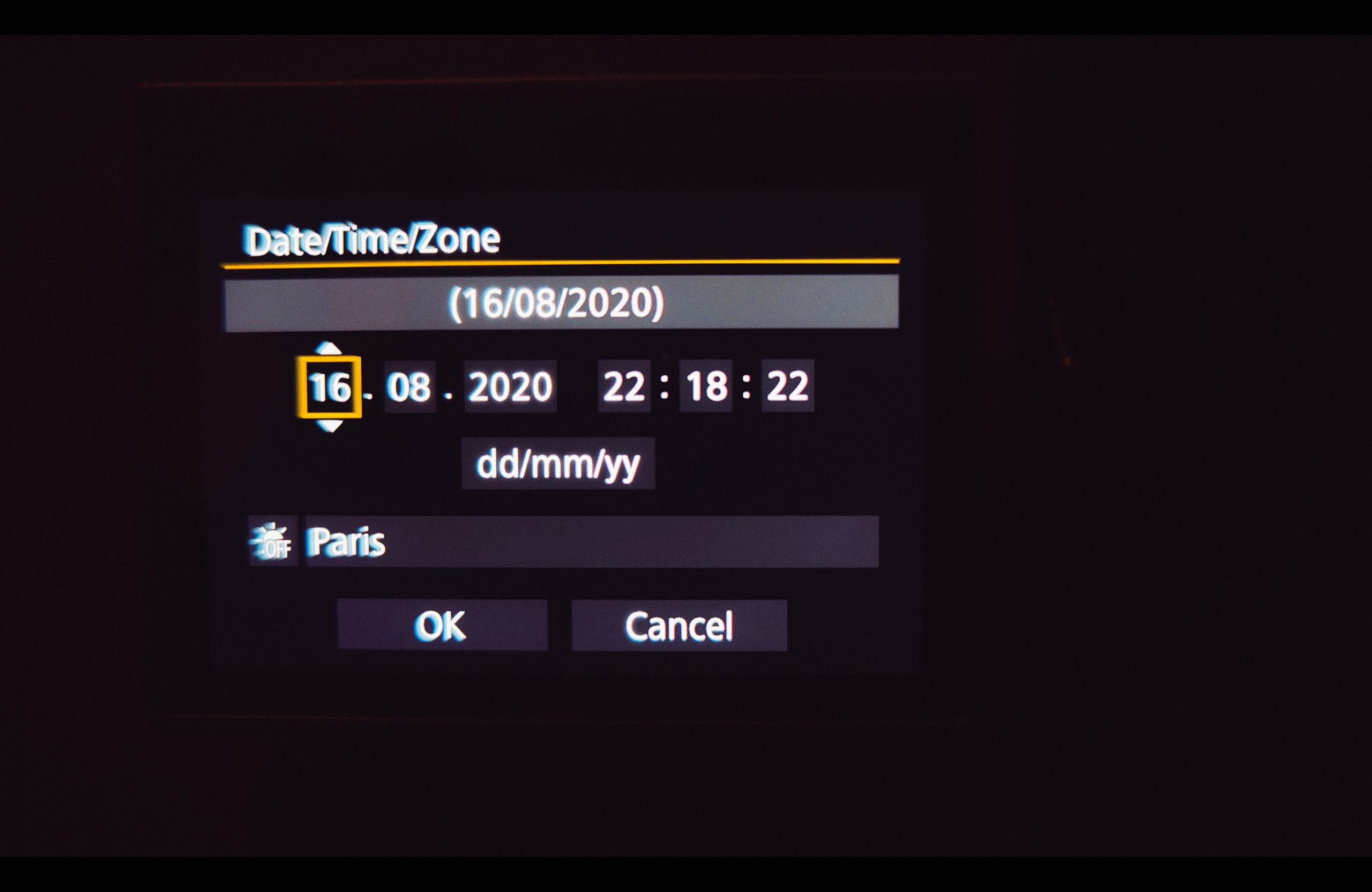 No hardware mode or hack required.

There’s now an easy and quick workaround to reset the overheating timer on the Canon EOS R5, even with the latest firmware. I have not tested the EOS R6 yet.

Previously it was thought that the battery door sensor had to be locked down for this to work (disorderly shutdown).

This actually doesn’t seem to be the case.

Just pull the battery out as normal! No data is corrupted and you can stop video recording first at any point.

The camera will reduce maximum record times during non-video related use like menu operation or photo shooting… In this case, if the remaining time gets low you can use the reset as above.

This blog post by KolariVision is also worth a read, which identifies the real-time clock chipset itself Canon uses to block you out of the video modes.

Canon uses a timer to shorten record times during use and finally to shut off the camera or lock you out from the highest performing video modes like 8K and 4K/120p. It is thought that Canon did this for marketing reasons, to segment the camera from high-end Cinema EOS cameras which they want professional users to buy instead.

If it were a genuine concern for overheating, they’d measure CPU core temperatures and use these to lock out the video modes. Also there would not be a 1 hour recovery time as the camera CPU begins to cool immediately after recording is stopped.

The great thing with this workaround is whenever you see the overheating warning you can simply dive into the menus, change the date and pull the battery to reset the timer. Up to that point, you can shoot as normal. Starting and stopping multiple recordings. Shooting stills. Anything you like. 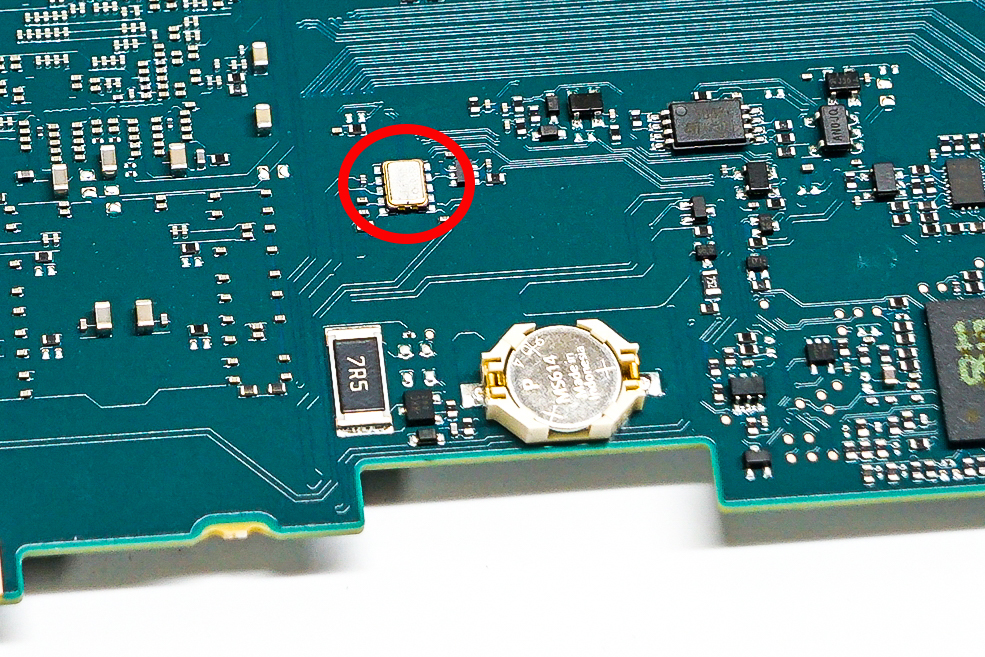 Unbroken continuous recordings of longer than the stated timer from cold or from a reset are not possible yet.

So this usually means 15 or 20 minutes of continuous recording in 8K, then a stop and reset.

In 4K HQ this usually means 30 minutes of continuous recording, then you can go again straight away for another 30 minutes after the reset / battery pull.

Can I put the date back to the correct day after the reset?

Yes simply dive back into the menus and put it back once the battery has been reinserted.

I recommend putting the date/time menu option in the favourites menu for quick access when needed.

Shoot freely, without fear of a ticking clock in the background for the privilege of your $4000!

Does it really get dangerously hot?

No users have reported a failure from real overheating using this workaround.

The disclaimer is: use at your own risk.

Not all circumstances have been tested.

But the suspicion among users is that overheating is an imaginary enemy on the EOS R5 and R6.

In situations where heat could be problematic (ambient 35-40C heat and 3 hours of almost non-stop 8K shooting!) you’d expect the ARM core in the DIGIC X CPU to shut itself down at around 95C or thermal throttle like an Intel CPU does. I believe there to be low-level built in protections from real overheating.

Magic Lantern contributors have been able dump unencrypted ROM contents (firmware) onto SD card with a script on the EOS R5 and R6 – so hopefully soon we can get a peek inside the firmware, see how the timer works, how the real DIGIC 10 temperature is factored in (if at all) and see what Canon changed between version 1.0 and 1.1.

Teardown reveal that the CPU doesn’t appear to need a thermal pad to conduct heat away into the magnesium alloy casing.

It does – but the conductivity isn’t optimally designed between the CPU and back casing otherwise they’d be a thermal pad and a copper heat spreader. 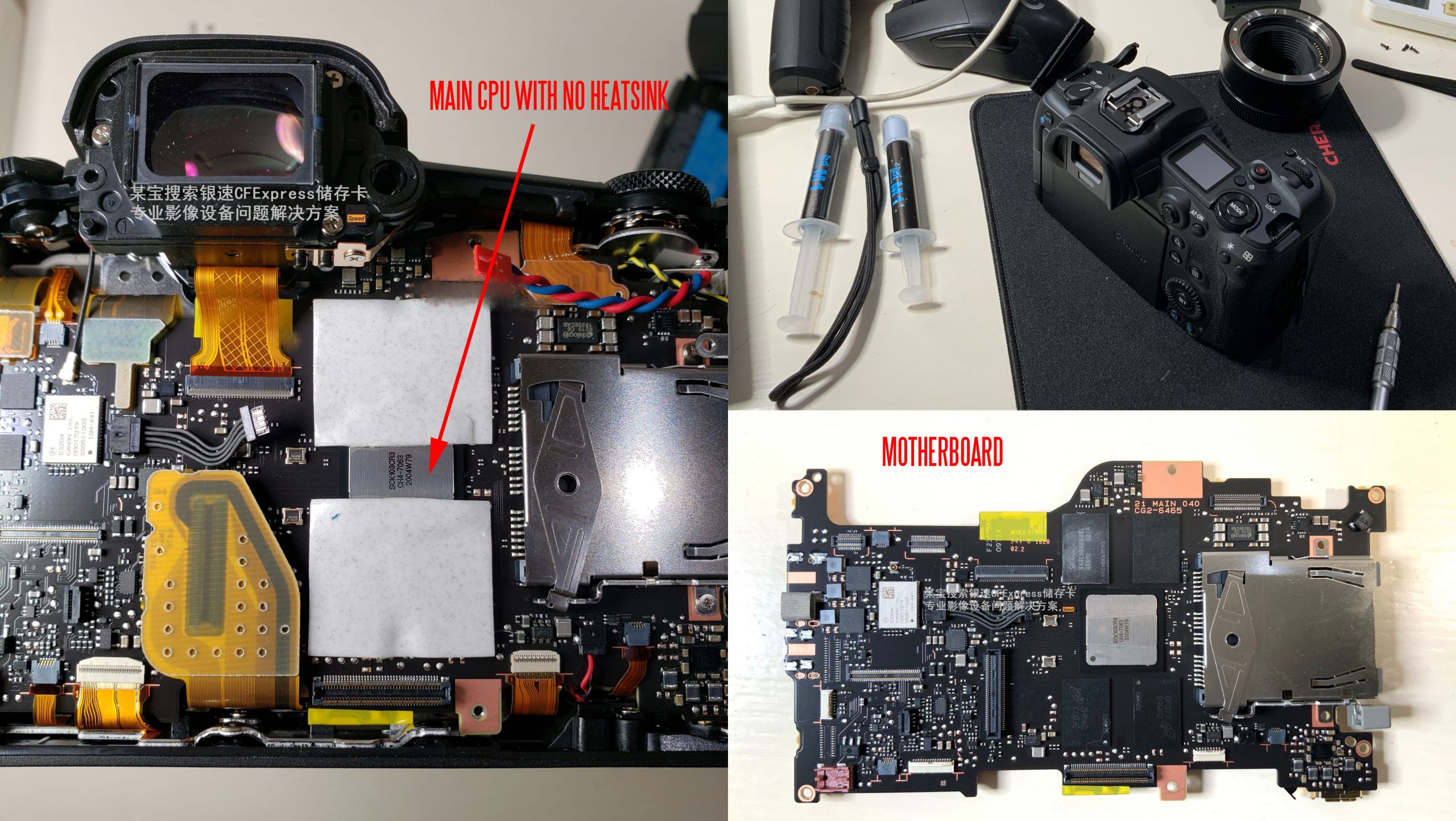 This workaround works with the 1.1 firmware update.

The new firmware increases record times from a cold start or reset, depending on ambient air temp. Some high profile YouTubers who were given advance notice of the new firmware for review purposes claimed it to “Fix overheating” or that it made a “Dramatic difference”. This isn’t true.

What has changed is that the camera now seems to measure ambient temperature from an internal sensor on the mainboard. A temperature readout can also be seen in the EXIF data of each JPEG. Previously the camera seemed to ignore the temperature sensor and not factor it into the cut-off timings. Any attempts to cool it (for example with ice or fans) didn’t work.

It would be nice if Canon can come clean now and tell us whether it is safe to do this workaround on a long term basis or not. Canon have yet to put out a proper statement about the camera’s behaviour, and they have not yet issued an apology for inconveniencing their customers. In my opinion they should come clean about why the timer was necessary and what it was really trying to achieve.

We went from the factory specified 15 minutes of 8K internal recording to shooting 8K for over 1 hour with several resets and no recovery timer until the battery died.

This is a supposably reliable $4000 professional mirrorless camera – have we been sold a lie about overheating? A convenient scapegoat for market segmentation by firmware restrictions?

Original ideal was detailed by VisionRouge in Hong Kong, and tested by “YourBoyLloyd” on the Magic Lantern Forum.

Also credit to KolariVision for identifying the Realtime Clock chip on the EOS R5 mainboard. You can hear about their thoughts here.

Prior groundwork by multiple people including myself (EOSHD) and CDA-TEK at EOSHD. Also Horshack and various Magic Lantern contributors.

The previous workaround involved pulling the battery during long continuous recordings. This wasn’t a suitable workaround suitable because it would corrupt the file.

BONUS: Especially for people like Fro Knows Photo there is an EOSHD cut-out and keep guide to making clickbait based on the groundwork of others. Download this here and make sure to buy Canon’s marketing department one as well.