Just when you thought the Canon EOS R5 overheating drama had been swept under the rug, the EOS R6 runs to pick up the baton.

But this time, not everybody can agree on what it’s good for.

These Canon articles write themselves really. If ever they could show you two products that justify my criticism of the company over the last 8 years on EOSHD, it is the EOS R5 and R6.

There is no bias, like I say the articles simply write themselves time after time. Be it mushy 1080p on the 5D Mark III, huge crops in 4K and being so slow to the high-end 4K mirrorless market that even Associated Press switched to Sony.

The latest debacle for Canon is of course the appalling reliability of the EOS R5 and R6 for their intended purposes – high quality 4K video shooting. BUT! They are stills cameras I hear people cry! Well somebody should tell the Canon marketing department then! 8K video this! 4K video that! Professional filmmaking tools! Peter McKinnon uses one! Peter McCanon himself!!

Alas, there is now another debacle, that of ‘field tests’.

We have one guy saying one thing and another guy saying completely the opposite.

Missing in action aren’t just a series of first takes in the Behiri 6 minute doc, which by the way I won’t be featuring here because in my opinion, it’s about as mediocre and un-cinematic as it gets. The ‘review’ of the camera is suspiciously devoid of even rough time estimates or shooting schedule info.

He doesn’t mention how long the average take was. How long did the camera continuously record for? How long were the gaps in-between, even approximately? He doesn’t mention what kind of rhythm the shoot followed or even whether the camera was left switched on in live-view between takes! Even missing, is the total shoot duration – was it half a day? Two full days? 8 hours on the go? Who knows?!

Unless I missed it, not a single time does he mention a specific number in relation to the concept of “minutes” or “hours” in the entire review.

So I tried to ask him and was met with this, quite frankly rude, dismissive abuse, which is why I’ve always given as good as I get when it comes to people like Mr Behiri (and Barney Britton at DPReview). 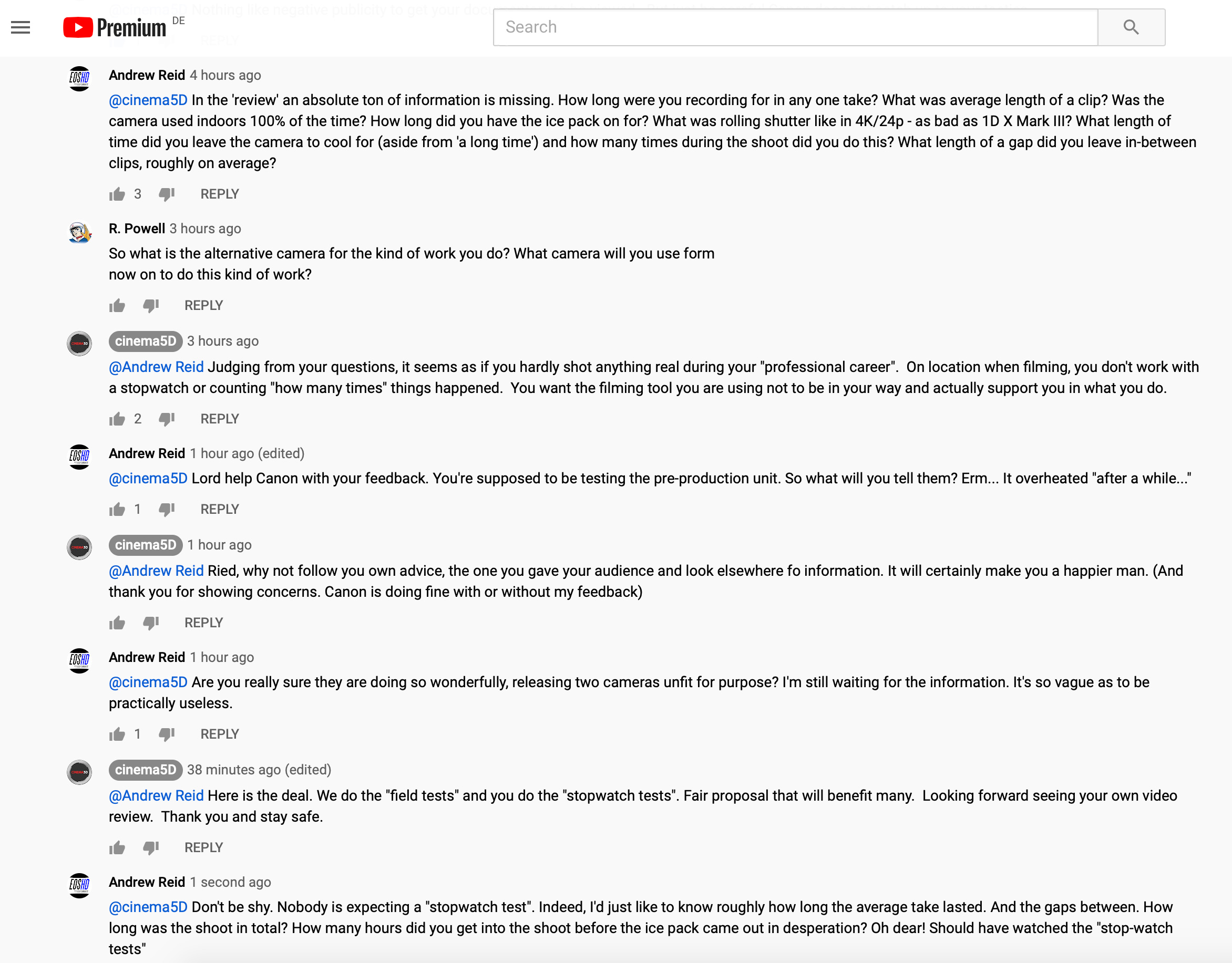 Behiri’s predicament is exactly why we have camera tests

He may try to dismiss me as ‘just a camera tester’.

But if we are going to enter into a dick swinging contest, I am pretty sure of which one of us is the a more talented cinematographer.

You only have to look at our images to know that!

And when it comes to the EOS R6, I am simply trying to work out the basics for the benefit of my readers… Who are in the dark as much as I am. Nobody, least of all me expects a stopwatch on set. Although, to be honest, in the case of the EOS R6 it might be a good idea! Along with a thermometer and 8 backup cameras? And an ice pack? Ah, but that doesn’t make any difference!

All this leads me to Jordan’s claim. Another big fan of mine, is Lumbersexual Jordan! A guy so sensitive to even mild criticism, that he once mistook my praise for an all guns blazing attack!

In the DPReview video the overheating issues are completely glossed over.

We are led to believe that this is the camera to get!

Summer in Canada, outside in direct sunlight?

So forgive me for being confused.

Who exactly is right?

Is it Professional Career Behiri who claims the camera is basically unusable for even short amateur filming projects?

Or is it Lumbersexual Jordan of Hipster Street who gave it the DPReview TV seal of approval and claims it goes for longer than the Duracell Bunny?

Answers on a postcard please.