Time of Flight / LiDAR continuous autofocus is really quite remarkable technology. There are rumours Panasonic will implement it on future cameras like the GH6. Don’t you wish the current AF-challenged cameras (like the Blackmagic Pocket 4K or Panasonic GH5) could do smooth Dual Pixel AF-style continuous autofocus?

Well, you could soon be in luck. Time of Flight Autofocus is a reality and I’ve seen it working.

With this prototype add-on, a ToF/LiDAR sensor sits in the hotshoe and talks wirelessly to the Pocket 4K via a Bluetooth controller. The autofocus motors in the Micro Four Thirds lens are commandeered based on real-time depth sensing information from the LiDAR beam.

I met up with CDA-TEK’s Ian this week in Manchester to take a look at what he’s been working on.

The evolution leading up to this prototype has been interesting to witness! CDA-TEK (or as I like to call him, BTM_Pix on the EOSHD Forum!) is a professional sports photographer and mirrorless camera owner. A few years ago BTM_Pix unlocked CineLike D on the Panasonic GX80 with a simple command over Wifi from a smartphone web browser. The thread on the EOSHD Forum is quite legendary!!! More recently Ian has developed a hardware remote and his “3C” Android app for the Blackmagic Pocket Cinema Camera 4K.

This wireless communication (and the programming side) is what BTM_Pix now specialises in full time and at the end of July there will be crowdfunding campaign which I’ll feature on EOSHD, for his Pocket 4K wireless hardware remote. Initially this will be for the Blackmagic Pocket Cinema Camera 4K but Panasonic and Leica mirrorless camera owners will benefit in future with similar products. Doubling as a wireless follow focus, this remote is able to control an extensive array of camera features via Bluetooth Low Energy (Bluetooth LE). With a one-touch to instantly pair (like wireless headphones do to your smartphone), the remote has a screen with real-time shooting information and settings on it, programmable buttons and really quite deep functionality for such a simple, small remote. One-handed control, no more diving into the menus and a necessity for when the camera is rigged out of reach. 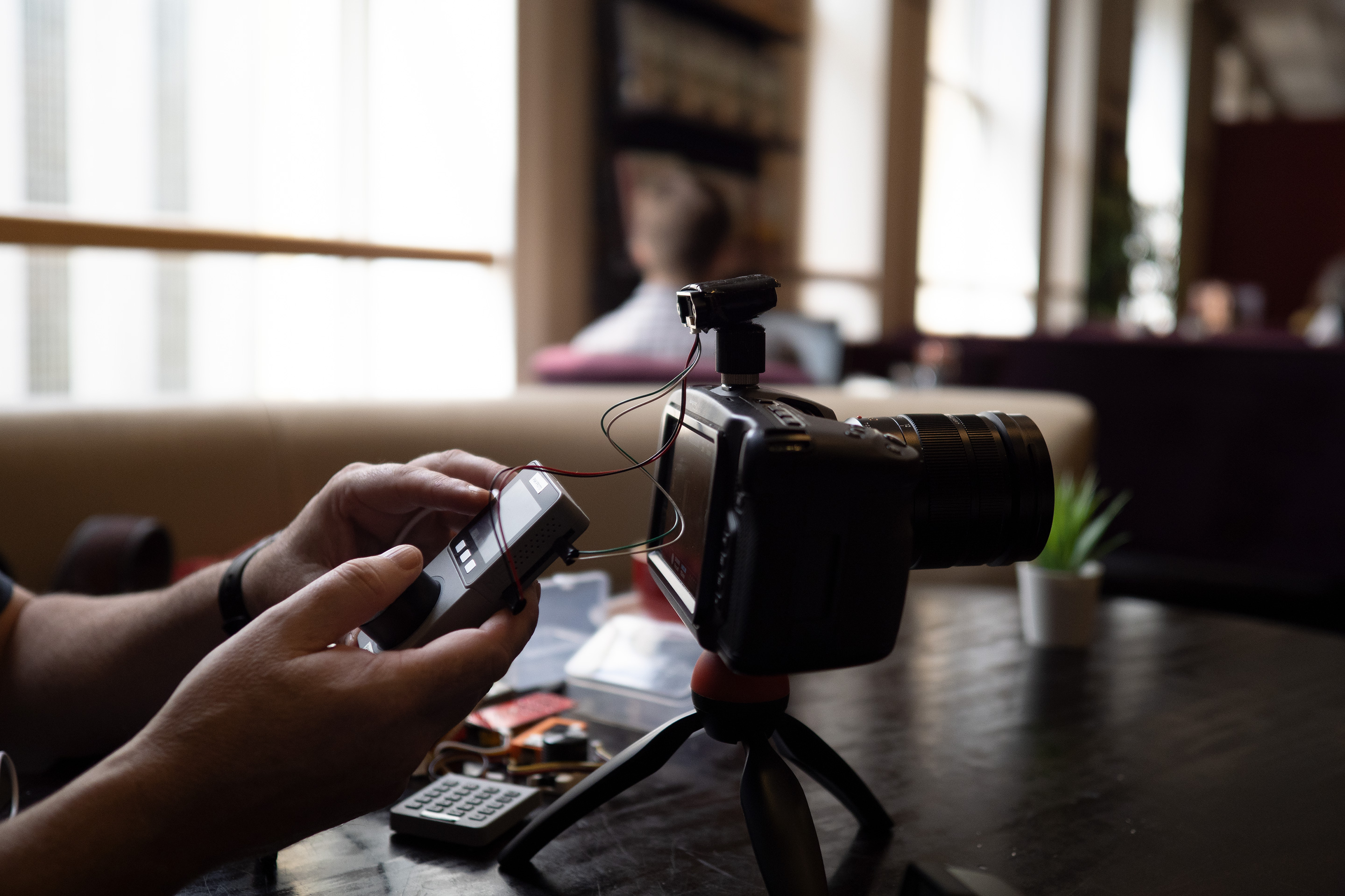 Anyway that brings me to our meeting in Manchester today.

What I saw, I felt was a revolution.

AF-C tracking is absent entirely from the Blackmagic Pocket Cinema Camera 4K but if you look at that video above, it may as have on-sensor phase-detect AF. How does that work?!

A small Time of Flight ToF sensor beams out invisible artificial light and measures the time it takes to bounce off objects in front of the camera. This sensor relays the depth information instantly to the camera via Ian’s prototype Bluetooth controller, bypassing the camera’s own contrast-detect autofocus system.

This ToF sensor tells the camera the exact distance of an object so that the camera knows where to focus the lens. The focus point racks seamlessly there, and doesn’t need to confirm focus, hunt back or forth, or refine focus with the camera sensor. What is incredible, is how well it works. It’s smooth and confident like phase-detect AF – but on a camera which lacks good AF-C altogether. 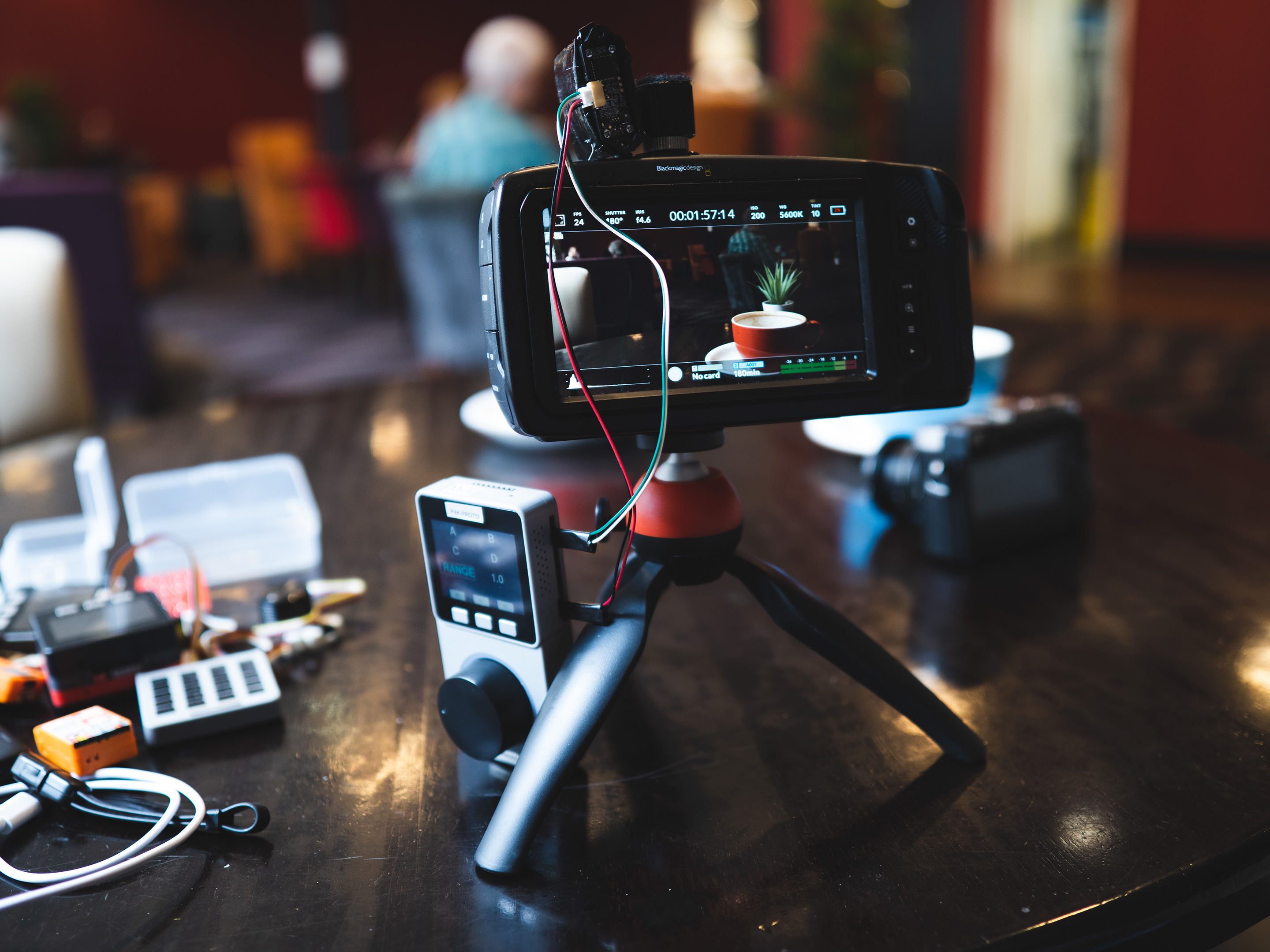 POCKET 4K SAMPLE VIDEO: Here the test footage shows smooth AF-C focus racking between two objects, based on the targets acquired by the prototype Time of Flight sensor. The ToF depth information is sent to the camera via Bluetooth LE via the remote controller module.

By coincidence, 43Rumors published a rumour yesterday that Panasonic were working on a Time of Flight based Autofocus system and now I can see how this would make sense. ToF would catapult Panasonic’s AF performance ahead of the competition and make Sony’s on-chip Phase-Detect AF and Canon’s Dual Pixel AF look like yesterday’s technology.

But Ian has got here first, and the prototype WORKS NOW on an existing camera!

It has the potential to be added to something like an existing GH5 or other AF-challenged camera. For now, the prototype only works with the Pocket 4K, and gives that camera the continuous AF you wish it had from the start! 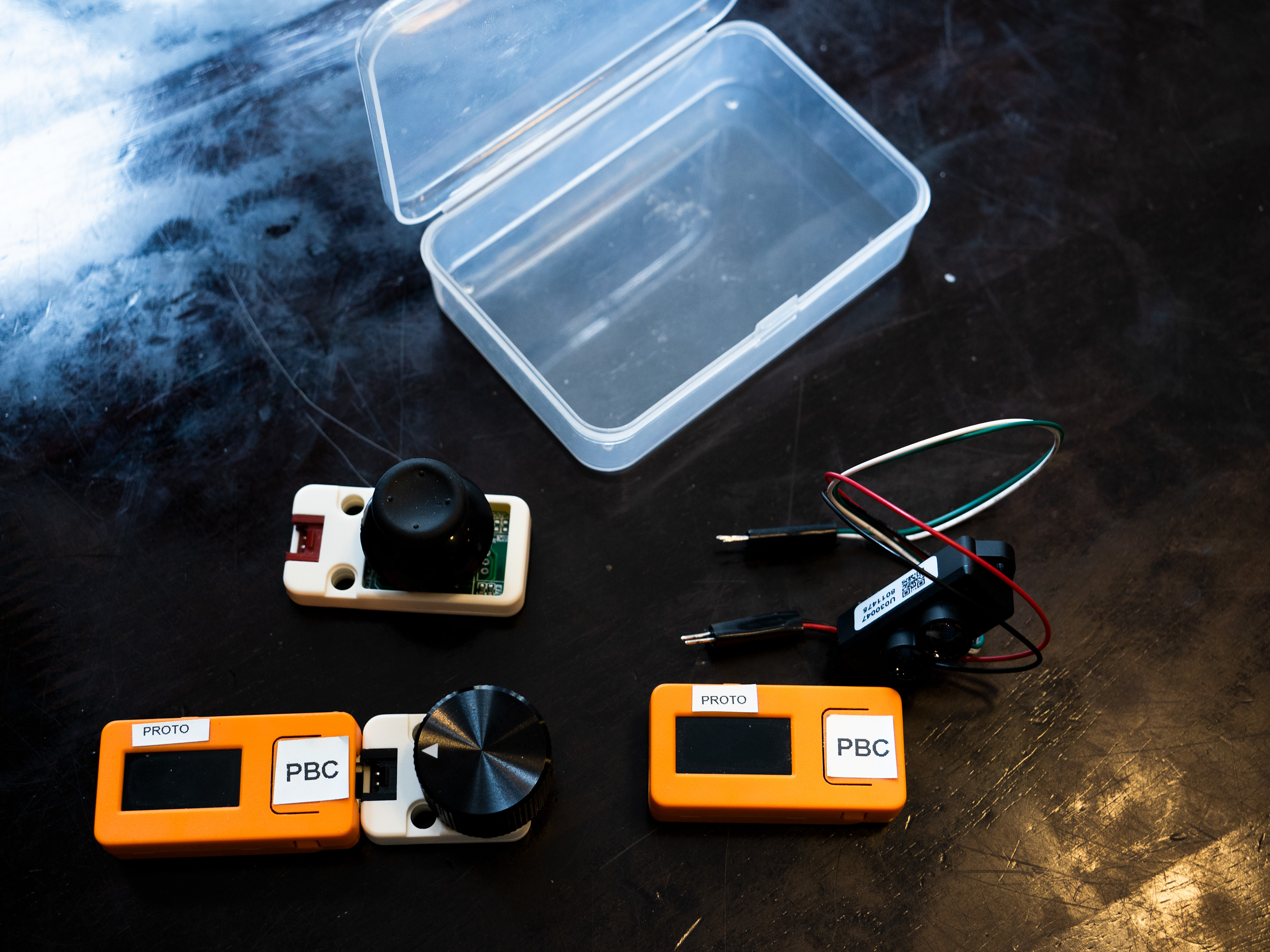 As you can see in the photo above, a simple, modular remote trigger the size of a small USB key (marked “PBC”) has a built in screen and control menus. Ian showed me a tiny follow focus thumb-wheel which attaches to the wireless remote trigger. The remote trigger and the follow focus are so small, they fit in a shirt pocket. This is a development prototype (obviously, with the exposed wires!) but in future, the modules will connect like tiny bricks of lego. Both would end up very nicely in something like a right-handed wooden grip, giving you the control of recording and focussing under a single thumb or forefinger. There is no servo or gearing to attach to the lens because the AF motors of the Micro Four Thirds lens are used to rack focus.

There is no USB cable coming out of the camera, the remote module is wireless and the device has a tiny internal battery to power the processor and Bluetooth LE. It can be charged quickly via USB C.

Blackmagic Pocket Cinema Camera 4K users can also check out the existing Android app which turns your smartphone into a remote control. It’s available now on the CDA-Tek website here.

Although the Time of Flight / LiDAR module is at the very earliest development and testing stage, it will be very interesting to see how this evolves. Unlike a large company with their large committees, one guy can make decisions much faster.

I will be working with Ian on future projects, so stay tuned for more developments in the coming month!

There will also be a Kickstarter campaign!