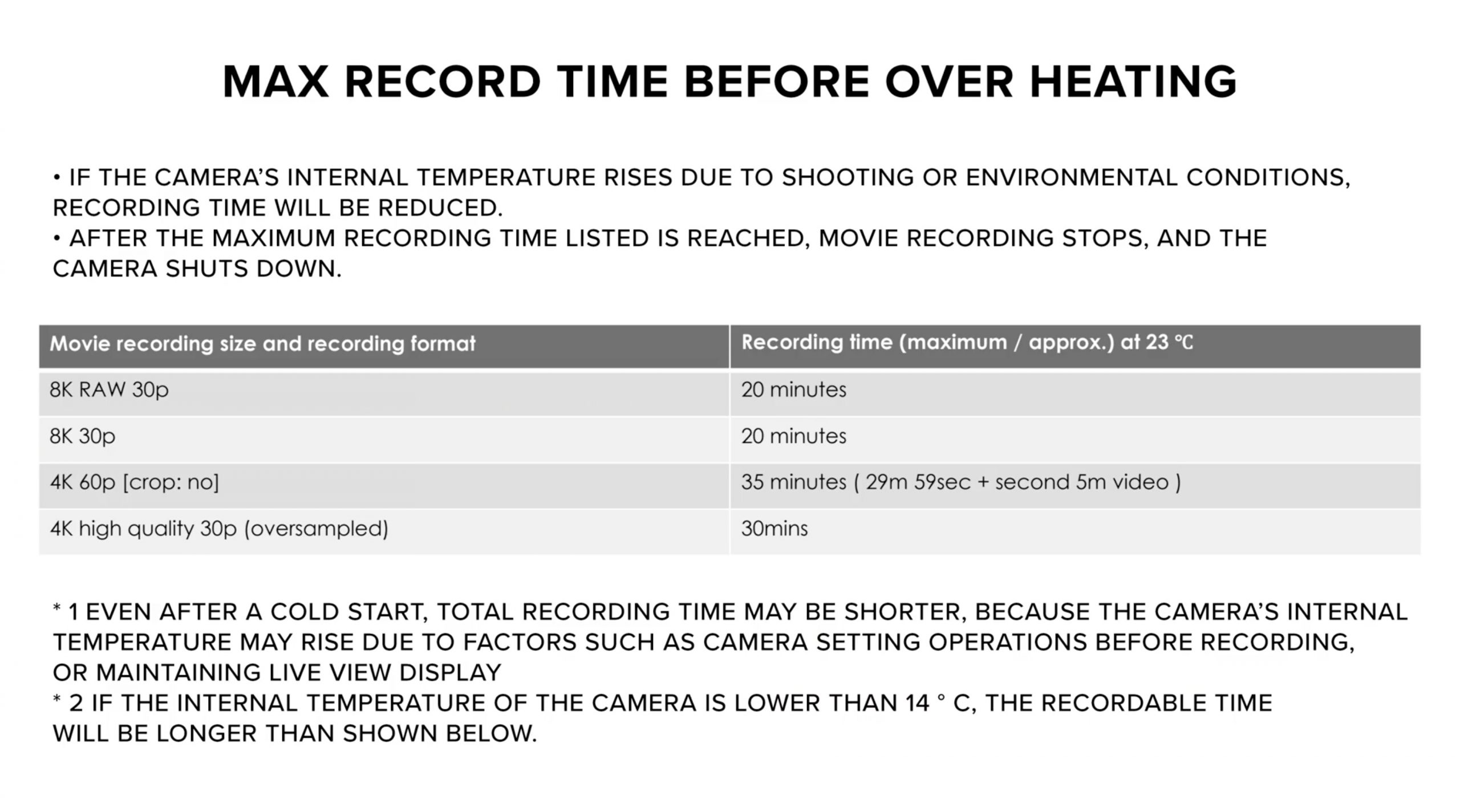 This information was supplied by Canon to the largest UK pro-video dealership CVP. It comes directly from the manufacturer’s own testing results.

The Canon EOS R5 does push the technology under the hood very hard. With only passive cooling and no fan, in a body barely any larger than the Sony A7 III, Canon has decided to implement very short maximum recording times for 8K and 4K shooting on the R5. The recording time limits become much more severe once the camera has stopped once on a shoot from overheating.

This is something to be aware of, as it will lead to important shots being missed. Certainly, if you plan to use the EOS R5 for interviews, live events, weddings and wildlife shooting where long continuous takes are required, you may want to stick to 1080p.

This is measured at an ambient temperature of 23 degrees. I hear this figure may go down to approximately 10 minutes in hotter conditions or in direct sunlight.

Once overheated, the EOS R5 can only go for a further 3 minutes in 8K even if left powered off for quite a while – 10 minutes. That’s a lengthy break when you are in full flow on an important paid shoot.

You’ve got to be kidding?

That’s totally unusable on set. Can see it now, holding up the whole production, waiting for it to cool, only to get 3mins of the next take? That isn’t going to wash is it!

Would it have faired any better in the 1d style body I wonder? Not massively.

Even after being completely inactive and turned off for 20 minutes, the camera stops recording 8K after just 8 minutes subsequently once back in action. This is a severe limitation in my view. 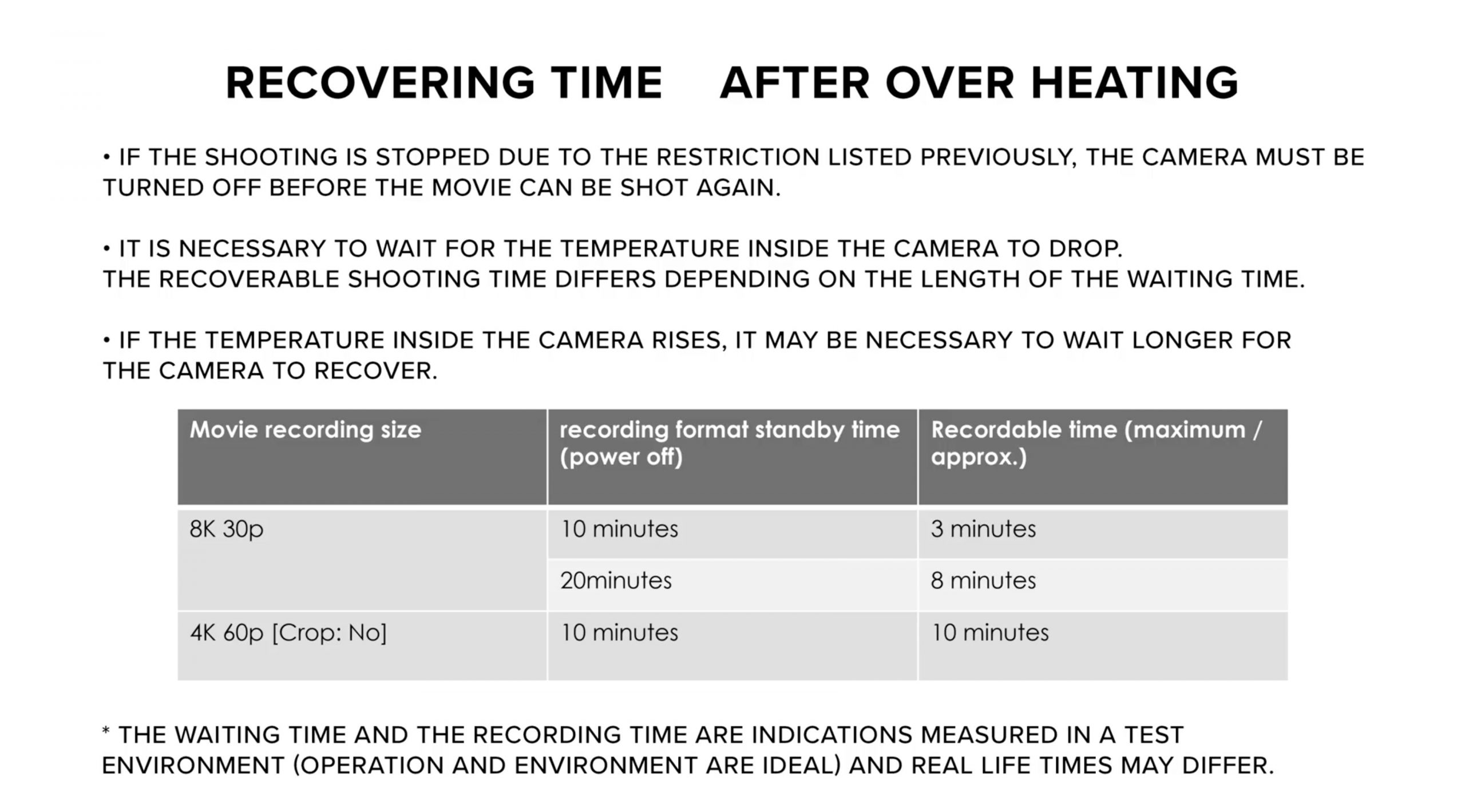 The 4K mode at cinematic frame rates (24p,25p) and 30p is oversampled from the full 8K sensor output. Here we can go for only an extra 10 minutes compared to 8K. Continuous takes are capped at 29m, 59 seconds for 4K 24p and a similar 30 minute cap applies to 4K 60p as well. A subsequent second clip after 30 minutes in 4K/60p is limited to 5 minutes. After that, the dreaded overheating warning prevents any further recording.

The recovery times are shown above. As you can see, once the overheating message has been shown just once during a shoot the problem gets far worse after rest.

Even when turned off completely for 20 minutes, the 8K recording cap comes down to 8 minutes instead of 20, and in 4K it is now 10 minutes rather than 30.

Even in the pixel-binned 4K/60p mode which isn’t oversampled from 8K,  a maximum of 10 minutes continuous recording is possible after resting for 10 minutes.

The Panasonic S1H has an active cooling system and 6K shooting. This fan prevents the kind of problems we see with the EOS R5 from occurring at all. As a Netflix approved camera, it would be unacceptable for the production to be delayed every 10 minutes due to a faulty camera. 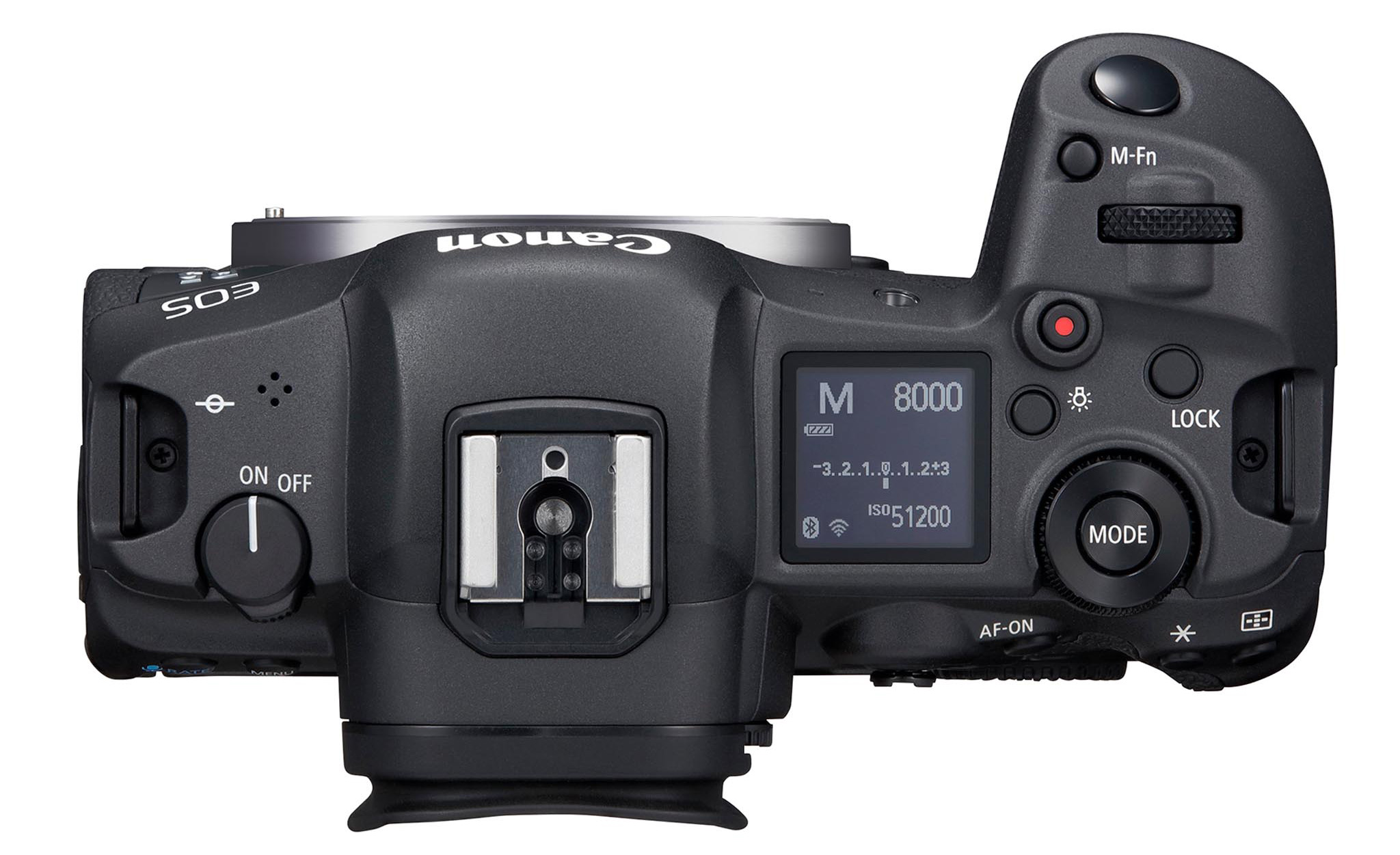 The other issue with the lack of vents or fans on the EOS R5 is that it takes a long time to cool down once it has reached peak temperature.

You may remember the Canon XC10 had an active cooling system and vent, and it is a shame one isn’t used here.

It is not clear yet how serious the problem is with shorter clip lengths shot consecutively or intensively over 1-2 hours in quick succession. How much 8K and 4K can we do like this, with short breaks in between short takes? How will the EOS R5 respond to shooting continuously in short bursts of 10-30 seconds, for several hours? And how quickly can the camera recover under these scenarios if it does fail?

This information certainly raises a lot of question marks over the reliability and heat management of the EOS R5.

In my opinion it may not even be usable for paid work, even for 4K/24p.