I’ve shot a comparison in Berlin today between my modified 5D Mark III and the standard 5D Mark III.

But is it any good? 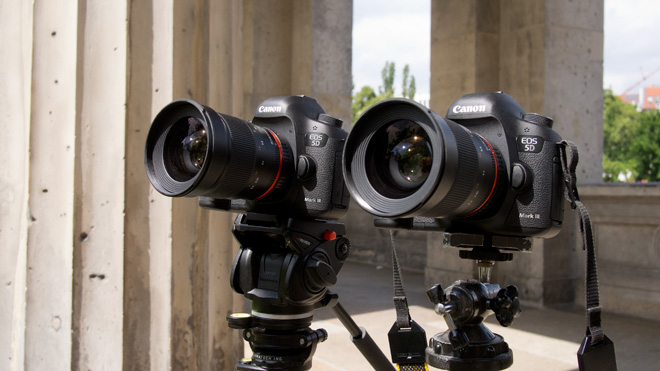 First we had the rather nice Liberation Day from James Miller, now is judgement day.

I was 2nd person after James to remove my OLPF (optical low pass filter). This is a piece of glass (pictured below) which sits in front of the CMOS sensor and diffuses light slightly in order to avoid moire patterns in stills. It wasn’t an easy modification so I did not at the time recommend anybody try it. There are professional technicians who convert DSLRs for astro photography by removing the filter, which also acts as an infrared cut. If you want to remove the filter you can do it for (on average) $200 at a repair shop. 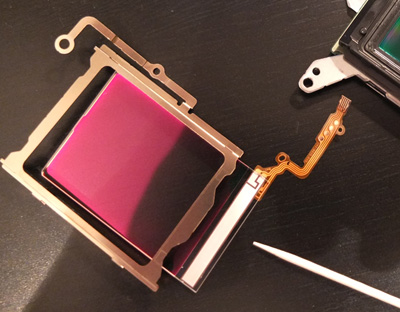 As you can see from my comparison video, there’s so little difference to detail and sharpness without the anti-aliasing filter (even in a raw still) that it is just not worth the hassle of removing it.

You have to really squint at a raw still to notice. The biggest difference is in the way the camera handles shadows and colour tone without the IR-cut filter. If I perceived more detail initially it was definitely from the lack of IR-cut.

The IR-cut filter is on the same piece of glass as the optical low pass and dust reduction system.

Losing it does bring the shadows out more, because the camera is sensing a fuller wavelength of light.

Losing that IR-cut filter and the dust reduction system however is a problem. The Leica IR-cut filter I used on my lens is not strong enough to counter the shift in hue. You still get plenty of infrared contamination and black fabric still goes purple. 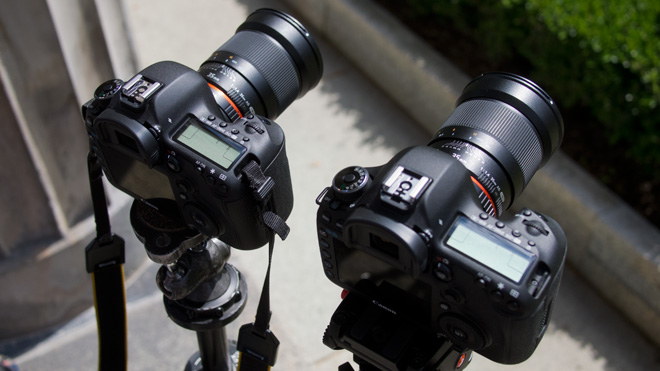 The dust reduction system is even more of an issue. I love film grain but using dust and small particles to mimic it is not my cup of tea.

Put simply you WILL have to have your sensor professionally cleaned the expensive way every month if you lose the ultrasonic dust reduction panel, as the dust sits closer to the sensor it is far more noticeable. It is also more stubborn to blow away. Cleaning yourself also risks damaging the sensor block itself. This part is $1000 to replace. Even a microscopic mark so close to the CMOS itself is a disaster in terms of the image.

An image which you have to sharpen digitally in post is the best we can hope for from the 5D Mark III. It is true that the image sharpens up pretty nicely. But grain and noise is nowhere near film-like, and the overall level of detail in 1080p footage still fails to rise above 720p in reality. Resolution is far lower than offered in 1080p by the $700 Panasonic GH2. The Olympus OM-D E-M5 also resolves more detail but with a weaker codec. Dynamic range also falls short of cheaper cameras in video mode, which is disappointing considering how great the 5D Mark III’s sensor is in raw and even the amount of dynamic range in JPEGs.

Adding digital sharpening in post is a bit of a chore, as you have to ideally fine tune the amount for every shot. I’ve found sharpening in Premiere Pro CS5.5 between 30 and 50 to give the best results. Unfortunately the in-camera sharpening is not up to the job and produces noticeable halos and an ugly electronic looking image.

I think Canon have displeased far more people in adding so little improvements to video on their 5D Mark III than they have pleased C300 shooters who have a clean image quality advantage for their $15,000. There are more of us than them, so why do we get ill-treated? The consumer stuff is so advanced – it saddens me greatly to see it less than it could be due to political reasons and short sighted ‘added value’ business strategies. The people who are disappointed with the 5D Mark III’s image are not just consumers, they are pros and filmmakers. All I can now suggest is that Canon learn their lesson for subsequent pro models under $4000 and consumer DSLRs.

My camera is currently at Rüdiger Maerz GmbH in Berlin having the filter assembly put back in for €170, but it has been a fun ride.

Big thanks to Dominique in Berlin for assisting with today’s shoot and for lending me his unmodified 5D Mark III. The lenses we used were all stopped down to between F8 and F11 for optimal sharpness. These were the Samyang 35mm F1.4, Leica R 90mm F2.8, Tokina 11-16mm F2.8 (at 16mm).