Huge thanks go to A1ex, g3gg0, 1% and the whole Magic Lantern team.

I have no other words to describe it – this is huge news.

Magic Lantern have done the seemingly impossible and given us a continuous raw recording mode on the Canon 5D Mark III. Once activated in the menus the 5D Mark III becomes essentially a full frame Blackmagic Cinema Camera and amazingly mine has not yet exploded. No more short bursts of raw, this is the real thing.

The image is leaps and bounds ahead of any other DSLR. We’re talking Alexa / Red league here, yet full frame. The first ever raw video shooting full frame camera at that. I’m getting continuous recording at a data rate to the card of 90MB/s and the camera hardly breaks into a sweat.

Here’s the option in Magic Lantern: 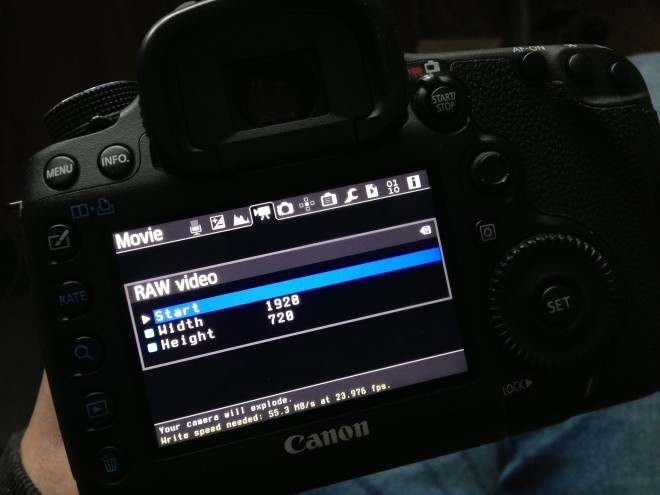 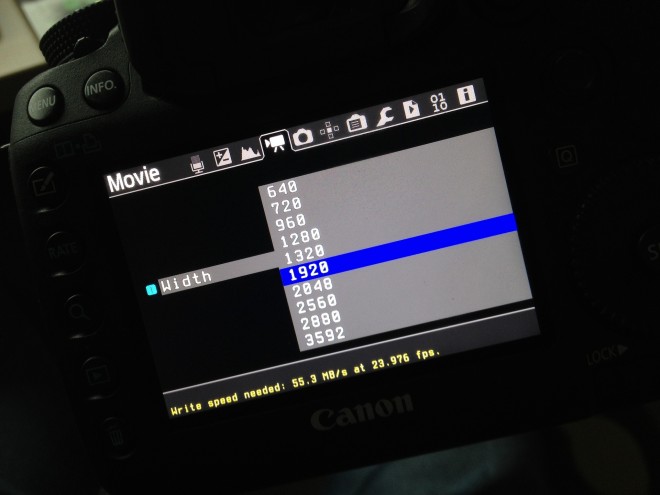 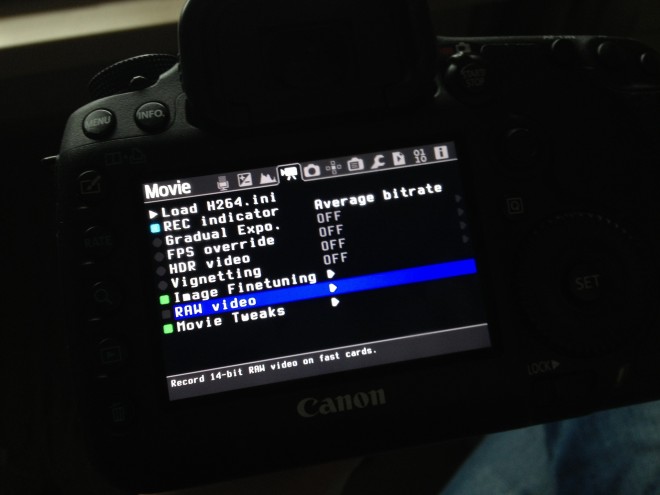 Needless to say you will need to invest in plenty of 1000x 64GB or 128GB cards especially for higher resolutions such as 3.5K which is over 7MB per frame!

Currently most of the action is being done on the 5D Mark III, once a reference version is finalised it will likely be ported to the 6D, 5D Mark II and even 600D. This is development code not finalised, not even Alpha yet. This is experimental code, just written.

Is heat an issue? Well I don’t know yet – I haven’t shot with it for long enough or in a hot enough place. The card and camera are warmer than normal, but that is to be expected considering the huge data rates generated by raw. I don’t know what – if any – implications for camera life this hack will have, but the sensor is always doing a raw video output in live view mode so sensor heat shouldn’t be any more of an issue than it was with ALL-I H.264 video. 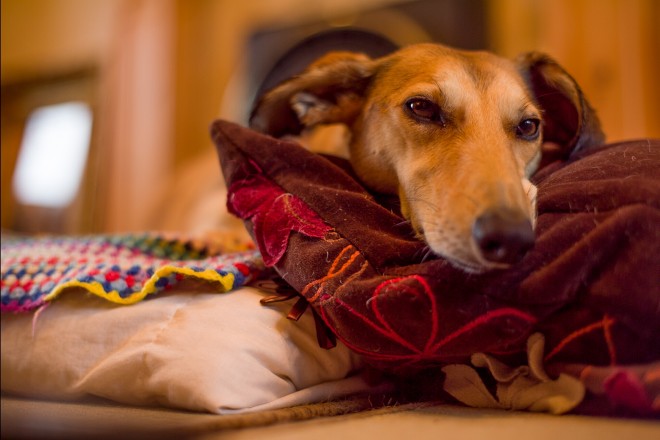 As far as my belief goes the breakthrough involved a deeper understanding of the camera’s EDMAC (External DMA controller) and taking clean crops of the image buffer. Unlike in the burst mode, raw data is not converted to DNG format in-camera, you have to transcode it to DNG in post. This is good because you can do a very high quality debayer of the image on a powerful PC. To my eye the image looks better than with the previous nightly builds via DNG burst mode.

Developers can now write utilities to convert the 5D’s raw video files to Cinema DNG compatible with Resolve (not just standard DNG) and the camera can store raw clips in a single ‘.raw’ file. Magic Lantern themselves currently provide a converter for Windows (raw2dng.exe), hence the camera is freed up to just dump the data from the image sensor direct to the card.

The converter can also output to MJPEG if you want to avoid the workflow and get a project out of the door quicker. Even when converted to MJPEG it is a huge step up in image quality from the factory H.264. The camera now has a raw video menu where you can choose your resolution, and even a panning mode (like a digital dolly) in the 1:1 crop formats. The panning can move the sensor window around the frame whilst recording! Higher resolutions than 1920×1280 are a 1:1 crop of the sensor, up to 3592×1320. Here’s a partial list of the currently supported resolutions:

Custom resolutions can be added in the Magic Lantern code, so effectively the raw codec on the 5D Mark III is totally resolution independent and can record in any aspect ratio. 3:2 and 4:3 aspect ratios will be very useful for anamorphic shooters.

Raw2dng.exe is currently very simple and runs at the command prompt in Windows, you specify the raw filename and away it goes. After that is done you simply import the DNGs as a sequence into After Effects, though there is a variety of other ways to do it not involving Adobe software. The good thing is that the camera records the raw data to ONE single file in-camera, making it easier to manage your clips on the card. There’s no playback of raw in-camera yet, but live view remains on whilst recording. I am sure a thumbnail reference can be created for clips later. 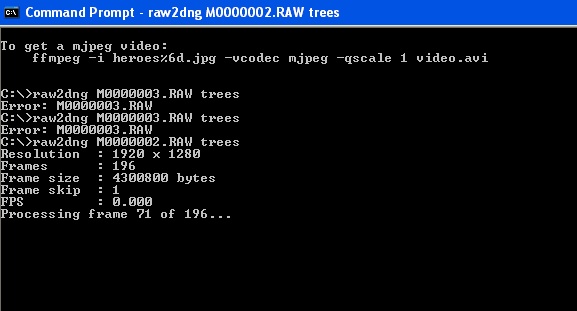 This continuous raw recording mode came about from a separate development branch of Magic Lantern to the very cool DNG burst stills silent pics. It started off as a module to record raw YUV 422 image data to the card. The burst mode is still in there if you need DNG straight out of the camera and that will remain as a stills feature.

Alex of Magic Lantern rewrote an entire module (lv_rec) to make this happen and you can take a look at some of the source code for the raw recording module here.

Yes the world just turned on its head and I have no idea what the implications for the market are going to be yet, other than that now Canon’s DSLRs, through no action at all from Canon themselves just became a whole lot more serious as cinema cameras.

There’s no doubt the raw images from the 5D Mark III exceed the quality you get from Canon’s much more expensive cameras, like the C300. The 1D C now also has some serious competition from much cheaper DSLRs. I feel Blackmagic could lose most from this though, and will be a shame if that happens. I’ve not yet tested them head to head but the sensor in the 5D Mark III is far more capable than the one in the Blackmagic Cinema Camera in many ways – generating clean moire free images especially in 1:1 crop mode and cleaner high ISO images from a much larger sensor. The BMCC is no longer as attractive to me.

The 5D Mark III is now top dog for video quality, far surpassing the GH2 and GH3. All this is rather tragic, because quite simply, Canon don’t deserve this success. It is entirely of Magic Lantern’s making, and they did it for us free.

If you want to show your appreciation please donate now to the team!!