Two weeks ago I finally got my hands on the eagerly awaited Sony HX9v compact, this is a bit of a game changer for compacts because it’s image quality rivals that from a DSLR, and for the first time we have 1080/60p on a $400 compact! Usually with a compact you end up sacrificing something and you never get all the nice bits in one package – well the HX9v changes that as well. The screen is 922k dots, the same as on a high end DSLR and 3 inch. The lens is a stabilised 24-385mm (16x zoom), and the new optical stabiliser technology is incredibly effective without much of a crop.

What is the purpose of a compact camera rig? Well it is something that has got the video journalists excited and it suits my style of capturing cinematic vignettes of real life too. The Guardian’s Dan Chung and BBC man Johnnie Behiri have both picked one up but as Johnnie pointed out you really do need a way to see the screen in bright daylight and some extra stability, and that’s where the Z-Finder comes in.

There’s no live HDMI video output on the HX9v so an EVF is out of the question. There’s a lot of buzz around the Zacuto Z-Finder EVF and deservedly so – but the viewing quality I am getting from this beautiful Sony screen and the Z-Finder Pro is fantastic – same optics as the EVF actually. It’s a happy marriage and just SO much fun to use. The standard Z-Finder has been much improved since I last tried it in early 2010. The Z-Finder Pro 2.5x I have on loan from Zacuto has a mounting quick-release plate which is far better than the stick-on z-frames of old. Also with many DSLRs now finally taking a hint from the 2 year old GH1 and getting articulated screens the Zacuto mounting plate has an added advantage. It stops the weight of the z-finder hanging off the screen and avoids the issue of the screen falling away from the camera. All in all, a lot more secure for run & gun. Here’s a view of what the Canon 600D’s 1MP LCD and the Sony HX9’s 922k LCD looks like through the looking glass of the Z-Finder: 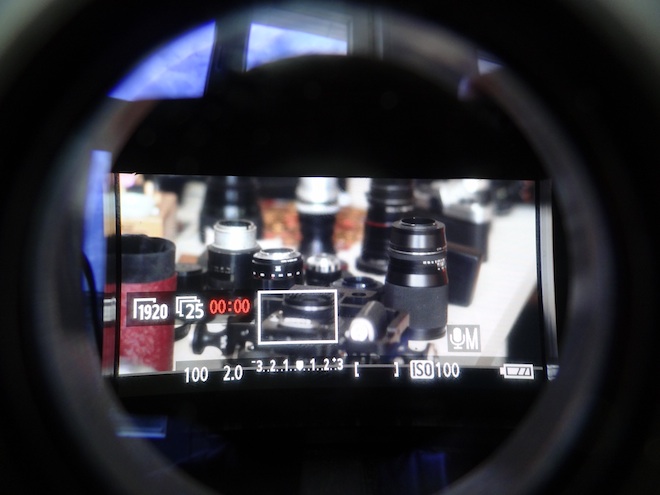 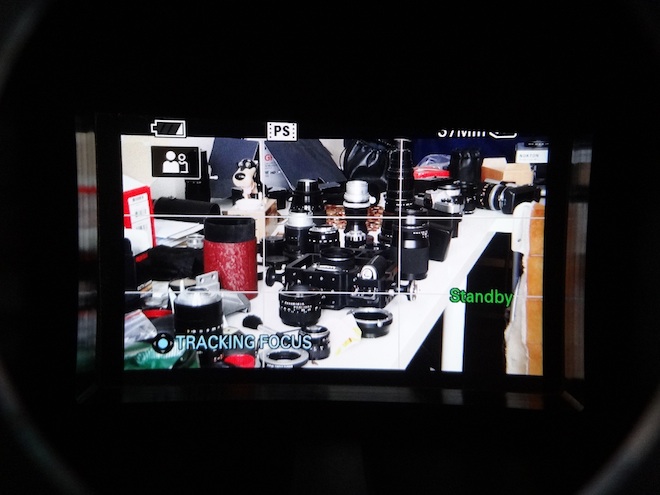 The Z-Finder Pro is really designed for larger DSLRs and not compacts, but despite that there really aren’t many issues. Because the LCD is flush with the bottom of the camera on the Sony, it sits very low on the mounting plate and so the Z-Finder is offset slightly too high. But you can get a spacer and screw the camera into that instead so it sits slightly higher, or just gaffer tape off the top of the Z-Finder to avoid light leakage from the front. Since the HX9v’s movie mode is 16:9, you don’t need to see the very bottom of the 4:3 LCD. You do however get a bit of light leakage from the sides – the compact is rather thin and doesn’t quite back properly into the Z-Finder’s seal. But again that could easily be solved by extending the seal of the Z-Finder forward by a few millimetres. This is only an issue when you have a very bright light source (or the sun) aligned perfectly on one side of you and it beams directly into the narrow gap. Pesky sun!

The purpose of this rig was discrete run & gun without the hassle of manual focus or shallow DOF. It is a rig to grab a fleeting moment, something that can be ready and shooting in seconds.

The HX9 is so good for this I actually shot a lot of the maze section of the short above without any rigging at all, just relying on the HX9v’s Steadyshot, handheld. At the 24mm wide end of the zoom you can almost get a completely locked off shot, it remains as if it’s on rails when you walk too. A bit of jitter creeps in at 250mm-385mm if you’re attempting a locked off shot handheld – crazy I know – but actually you can get some very smooth panning movements even at the long end of the zoom, so sometimes a bit of movement is good. I’m going to post more footage to demonstrate the Steadyshot capabilities of the HX9, it really is something to behold.

The video above was shot entirely handheld, both with and without the Z-Finder / Pistol grip. 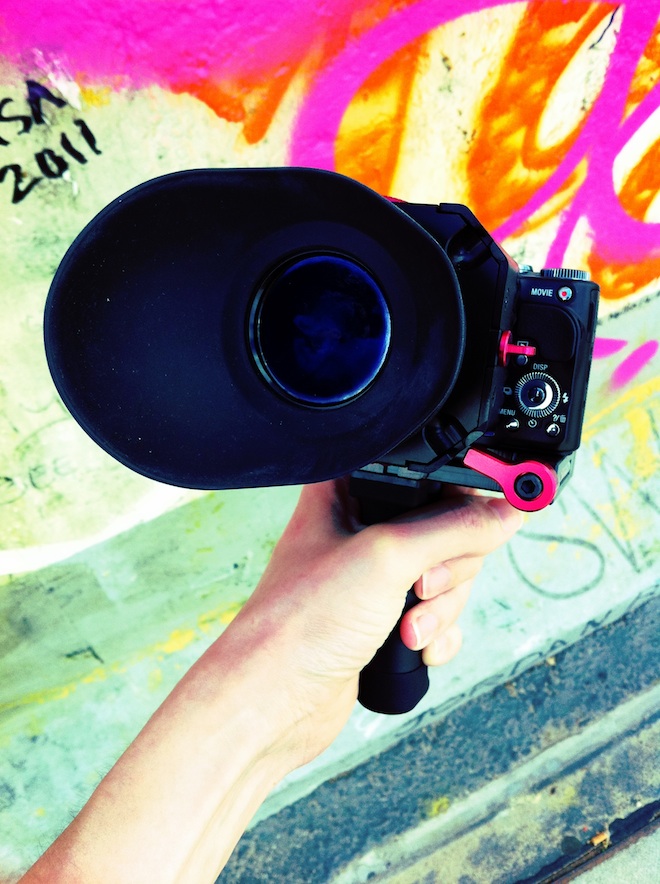 Above:  Shooting the remains of the Berlin Wall with Z-Finder and HX9v

When I needed even more stability and better screen visibility I attached the Z-Finder Pro 2.5x and a pistol grip. The grip is a generic Hong Kong one and simply bolts to the bottom of the Zacuto quick-release plate. The ergonomics of this little 1080/60p gizmo is pretty good with the Z-Finder, all the buttons are unobstructed. The Z-Finder is very comfortable and padded held to the eye.

AF is good for a compact (although obviously not up to prosumer camcorder or ENG standards in terms of speed or reliability), and what helps here is a simple press of the d-pad softkey that activates AF tracking. The tracking spot appears in the middle of the screen, and cannot be moved. The idea is to move the camera so that the object you want to lock focus to is centred, and then when you move the camera or frame the shot the AF keeps track of that part of the scene and locks focus to it no matter where it is in the frame. You can use it like a semi-manual focussing aid. The only other manual control is exposure compensation and this is very important on the HX9v. There’s a trend in digital capture as sensors get more and more sensitive for dark areas of the image to be held onto incredibly well with little noise, but for highlights to blow very suddenly. The dynamic range of the HX9 is actually ok, but it’s concentrated at the lower end so best practice with this camera is to almost always underexpose, sometimes by as much as 2ev to protect highlights, and then boost the shadows and mids in post.

Editing 1080/60p is about 2-3x more demanding than 24p since there are more than double the frames – double the data. I have a mixture of frame rates in this project. It’s all shot at 50p on my PAL HX9v. A 50% slow-down in Premiere CS5 gives me 25p slow-mo. For some shots where I wanted even slower motion I used Twixtor which works even better with 50/60p than it does 24p because it has double the frames to work with and interpolate between.

I also used Twixtor at 10% normal speed to take some jitter out of certain handheld telephoto shots which I wanted locked off, so it acts a bit like Warp Stabiliser but without the huge crop.

Of course 50p goes perfectly to 25p if you want the cinema look, without slow-mo. Just conform it in Final Cut Pro. Although bare in mind that the HX9 will usually shoot at a high shutter speed in daylight and you can’t override that manually, so you lose a bit of cinematic motion there. With 60p on the NTSC model, that goes to 24p pretty well too although purists would say it doesn’t exactly, it looks good to me. On the PAL version there is also a 1440×1080 25p mode which records to standard MP4 rather than AVCHD. Although horizontal resolution is slightly less in this format you don’t really notice a loss in detail. That mode is 30p on the NTSC model.

AVCHD on the HX9v is recorded at the highest current spec – PS mode at 28Mbit. There’s a little bit of compression but it’s pretty good. The higher bitrate goes toward storing so many extra frames, so it is not quite as clean as the AVCHD 24Mbit 24p on the GH2 in terms of compression, but again for a compact it’s in a different league!! 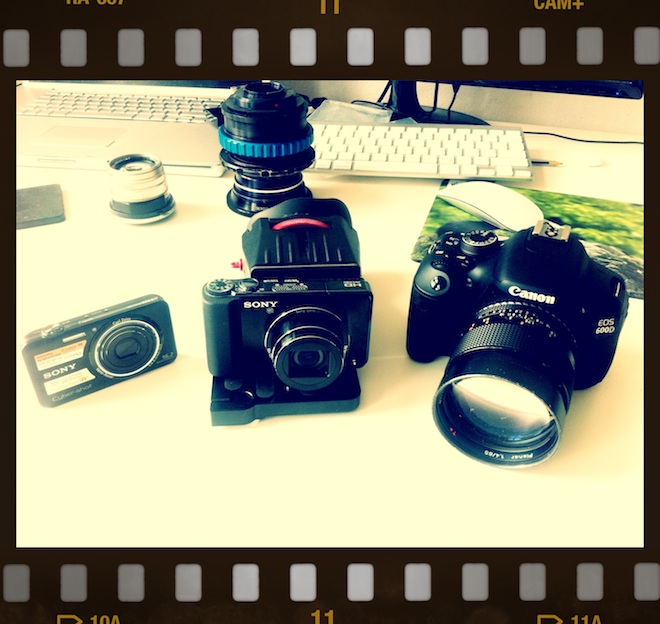 The lens on the HX9v is given Sony’s highest designation – G. Same as the top end DSLR lenses. It is certainly the best lens I’ve ever used on a compact. Despite it’s extreme range, distortion is well controlled, it’s sharp and corner sharpness is much better than on credit card sized compacts with their smaller optics like the IXUS series. Though you do get some vignetting / light fall off at the mid-range of the zoom which is noticeable on very evenly lit scenes, like shots of the sky for instance. Unfortunately the lens isn’t always 100% stable whilst you zoom in video mode, and it can shift the image sometimes. It doesn’t happen all the time but you don’t get a smooth flow from 24mm to 385mm and make sure you have an external dual system audio recorder on you because the onboard mic pics up a lot of lens stabiliser and zoom noise, which is to be expected from a compact really.

Battery life is good – better than the average compact despite the monstrous image processors delivering 16MP stills, 43 megapixel panoramas and 1080/60p video, all the whilst powering a 922k live view and LCD. The battery is almost the same capacity as the one in my Canon 600D DSLR, despite being half the size. Good effort Sony.

How does this compact compare to a high end prosumer camcorder for run & gun, documentary and journalism? Well it is certainly smaller and more discrete. People think you’re taking holiday snap shots with it, not video. You can take it into places where video cameras aren’t allowed, like Longshan’s Temple in Taiwan. The lens is better than on most prosumer camcorders too. In the Potsdamer Platz Sony centre in Berlin, I tried a £1200 prosumer camcorder on a professional Sony video editing reference monitor, and the HX9v. The prosumer camcorder had more purple fringing than the HX9 and wasn’t sharper. Also the 24mm wide angle is not very common on camcorders, and they don’t do as good stills with the amount of manual control you get on a high end compact. The HX9’s raison d’être is to be pocketable, quick to use, easy to focus. Otherwise, I would use my GH2 especially for low light. The HX9’s lens is F3.3 at best and it has a small 1/2.3″ chip.

When you pair it with the Z-Finder, the HX9 is a serious tool for pros. There’s no doubt about it. It’s capable in the right hands of getting one decisive moment after another with aplomb. Frankly you should be ashamed if you miss it, such is the coverage of the lens, the stabiliser, the screen, the Z-Finder and the AF system – it all adds up to a real beast for journalists, artists and documentary makers. It has even more stealth factor than a DSLR, certainly more than a video camera. It has a better lens and stills mode than a camcorder, and it’s pocketable. The Z-Finder makes for perfect handheld video. No need to set up sticks, a shoulder rig, or adjust anything – it just works.

I feel there’s going to be an explosion of interest in high end compacts like this as people cotton on to the benefits of one for certain types of work, and it will be good to see some miniature Zacuto products to go along with it, like a pistol grip with remote shutter trigger release for example.

I had tons of fun with this combo, felt really creatively inspired by it and captured stuff I would have missed with more elaborate setups, so for that reason it is a perfect accomplice to my DSLR and lovely manual focus lenses. Just bare in mind it is still a compact with a small sensor so for most work on set, like narrative dramas you are best of sticking to the aesthetic of interchangeable lenses and large sensors.