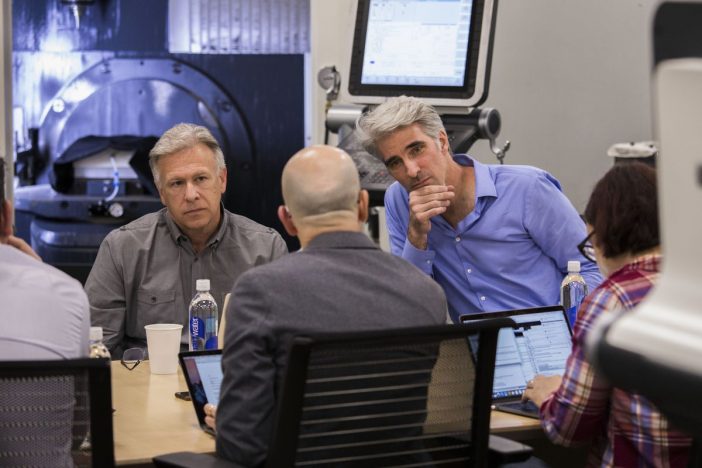 UPDATE: It turns out a small group of journalists were invited to the Apple R&D lab for Mac products for a round-table chat with Phil Schiller, Craig Federighi and hardware chief John Ternus. The resulting interviews are revealing – Apple say the previous Mac Pro design boxed them into a thermal corner on performance and thus apologise to pros for the lack of updates. It seems they are putting this right.

Apple. We need to talk about Apple… The Mac Pro is going to be beefed up considerably in the next update (John Gruber‘s blog post on this is well worth a read).

This would certainly be a tonic video pros and filmmakers need right now. The new machines would allow for a more modular configuration, according to Apple, to suit the broad range of creative needs rather than a ‘one size fits all’ approach. In terms of the packaging this would allow a hotter running GPU. The 2013 design ethos was for a quiet rig, packaged very tightly around a thermal core. Apple misjudged the demand for a machine like this.

Cupertino also confirmed that the Apple branded Cinema Display is returning, following quality control issues with the current LG 5K displays. This would also be a very welcome move as the current LG model isn’t even compatible with the latest Mac Pro! Speaking of which:

“Apple is today releasing meager speed-bump updates to the existing Mac Pros. The $2999 model goes from 4 Xeon CPU cores to 6, and from dual AMD G300 GPUs to dual G500 GPUs. The $3999 model goes from 6 CPU cores to 8, and from dual D500 GPUs to dual D800 GPUs. Nothing else is changing, including the ports. No USB-C, no Thunderbolt 3 (and so no support for the LG UltraFine 5K display).” 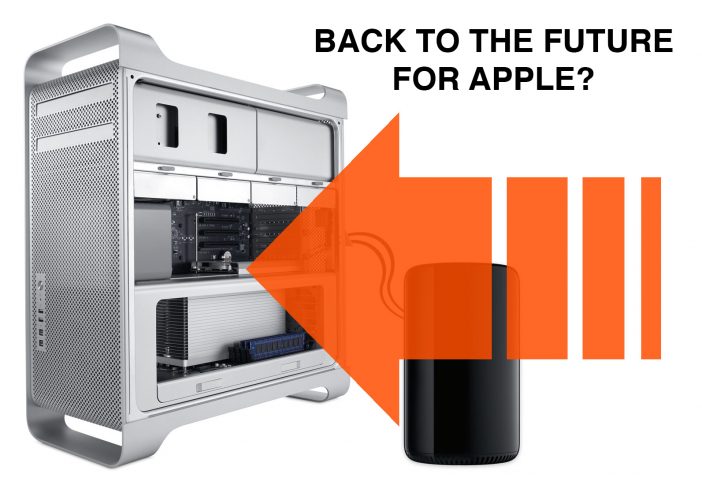 I think the current hardware leaves too many Mac OS creative users dependant on more powerful PC hardware and Hackintosh rigs. Many have migrated to Windows. I think Apple should also address their pricing structure to open up a mid-range too. $3999 is fine for most professionals but what about the rest of us? We could spend half on a Windows PC and get better specs and more flexibility.

Apple have undoubtably been focussed on mobile in recent years and in doing so I think some confidence shaking problems crept through to the Mac ecosystem. For example Apple and Adobe did not even see fit to have Premiere working stably out of the box with the launch of the last Macbook Pro, a rather shabby state of affairs involving a $3000 laptop!

Other controversial decisions seem to revolve around connectivity and an over-agressive move away from legacy ports. The removal of standard USB ports from their Macbooks and the analogue headphone jack on the iPhone 7 was to speed up the adoption of USB C and wireless headphone technology. I think the intention was to encourage innovation at third party manufacturers so that they have more incentive to make use of USB C and wireless connectivity.

Some audiophile standard wireless headphones do now exist and superb lightning headphones like those from Audeze (Sine) but the abandonment of established ports has meant short term pain for the customer, in return for speeding up the adoption of new technology. The net result was to genuinely shaken my belief in the company’s products and created havoc with my workflow.

Then there is the question of Imagination. By Imagination I of course mean the British powerhouse graphics chip R&D firm Imagination Technologies. Apple this week announced they plan to abandon the company and develop their own graphics processors for future mobile devices like the iPhone.

Imagination with their superb PowerVR processor relied on Apple for 50% of their revenue. To have the rug pulled under them like this was absolutely unethical in my view… Those loyal to the Apple Steve Jobs school of thought would say that he would have behaved in exactly the same way and the company has allegedly been poaching top staff from Imagination in the UK. To do that and then tank Imagination’s share price by 65% with the recent announcement is hard to stomach. Is this really the standard of ethical behaviour we expect from a company like Apple?

What I think what the computer industry needs right now is a viable third operating system to compete with the Mac and Windows duopoly. The open source variants of Linux sadly doesn’t do it for the masses yet and Android x86 (based on similar fundamentals) can scale to a desktop solution similar in performance to Mac OS but the apps are all designed for mobile and ARM architecture.

I just hope creatives can have that ‘different’ option to turn to, should Apple not get the new Mac Pro right both in terms of design and pricing. I see too little innovation on the Mac side right now, both in terms of the hardware and the software.