You may already have heard of the Lytro camera which originated at Stanford – a plenoptic camera / 4D light field camera. The concept has a depth sensitive imager and software determined focal plane meaning you can focus after taking the shot.

The technology works by employing a different microlens design to today’s digital cameras, which captures more of the ‘light field’ and essentially stores a tiled array of the shot on the sensor, each representing a different focal plane. 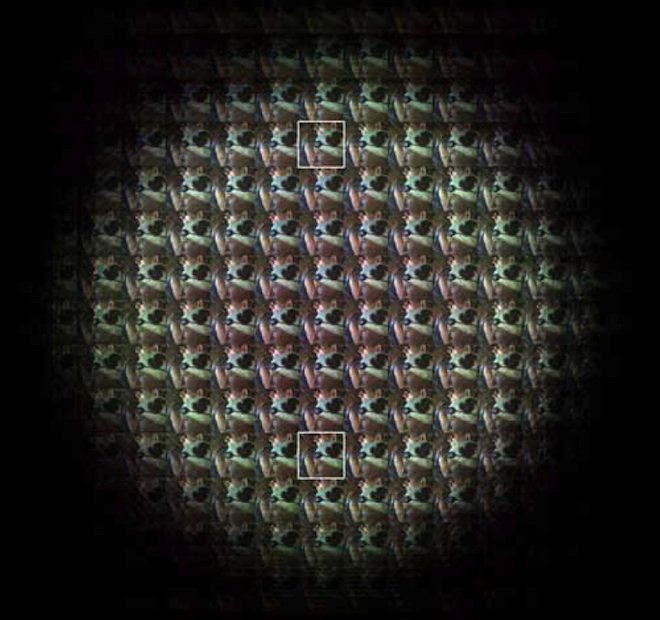 However since so much of the sensor is given over to sensing depth, and not just resolution, a 100 megapixel sensor would be needed for an output photo of just 5.2 megapixels.

Lytro is aiming to have a consumer priced camera out at the end of 2011, but it’s likely resolution will be just VGA 640×480 (or roughly 0.3MP) from a 20MP effective 1/1.7″ sensor. And don’t expect winning image quality with such a fine pixel pitch.

It will be a revolutionary step-change, but as always with version 1.0s, in many respects it will be nowhere near established technology.

Now EOSHD has discovered that Adobe have also been working on one, having began with their own prototype 2 years ago.

They’ve designed a lens and software which gives you focus-free shooting, on an otherwise normal DSLR. Adobe’s prototype was developed back in 2008 and has been refined since. It is currently waiting to be fully commercialised, but it is not clear on whether Adobe will enter the camera market with their own DSLR or license their optics and software to established photographic giants like Canon. On the software side, Adobe may add the feature in a post processing app or embed the functionality in a DSLR’s firmware. But for the results to be acceptable, Adobe must wait for sensor technology to increase to the requisite level of megapixels – preferably 32MP+.

“Adobe’s prototype ‘light field’ lens attaches to a normal digital camera to shoot the same image from dozens of focal points at once. [Not sequential shots but simultaneous and tiled on the sensor]. Later, software combines all the images, so you can refocus your photos after they’ve been shot.”

Although approximately 19 optical exposures are produced by the lens, Adobe’s software is able to seamlessly morph from one focal plane shot to another digitally.

Software and electronics companies are becoming an increasing threat to the photographic giants, Canon and Nikon – although the big 4 (Canon, Nikon, Sony and Panasonic) do have the advantage of making their own sensors, and the megapixel race has put the focus-free camera within reach, even for consumers.