High speed shooting hasn’t been possible on DSLRs until now. Again it is the much dismissed Nikon V1 providing the creative inspiration…

I love slow motion far more than sped up footage or timelapse. This shoot was not planned but with the ice age gripping Berlin, my friend Susanna and I decided to do a shoot inside. The challenge – to use just two lights and the small handheld Nikon V1. Inspired by the very low-fi quality of Slow Moscow, the low resolution of the V1 wasn’t that much of a concern. I actually think the video benefits from it. I think of this character as a replicant of some kind, a seductive android. I could have borrowed an FS700 and pushed the clarity up – but there’s something weird and low-fi about the V1’s slow-motion mode. In addition, with limited low light ability and a narrow dynamic range it was very easy to crush out the dimly lit walls and doors of my flat and just light Susanna in isolation against the darkness.

The V1 shoots 400fps at 640×240 in an anamorphic style wide aspect ratio. I upscaled it to 1280×480 in Adobe Premiere and added black bars to make it a more standard 1280×720 HD for Vimeo. When it comes to the web, I don’t like it when a wide aspect ratio clip is sitting on a page with no black bars. Those bars give you some separation between the narrow video and the clutter on a page so I added them.

The V1 maintains the stabiliser of the lens whilst shooting slow-mo video (unlike the fixed-lens Panasonic FZ200 which does 720/120p and 240fps at 640×480). However I chose to use the CX 18.5mm F1.8 lens with no stabiliser and no tripod. 400fps takes any jitter out of handheld shooting and the wide aperture was much needed. 400fps requires a minimum shutter speed of 1/400 therefore you need quite a lot of light and a fast aperture. ISO was kept under 800 to avoid too much noise. The 18.5mm fast prime works out similarly to a 50mm on full frame in terms of field of view, and it is fantastically small and light. 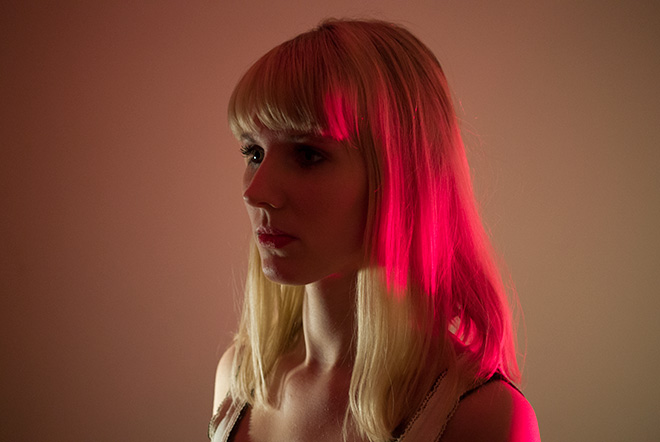 A still shot with the silent electronic shutter on the V1

Throughout this shoot it was a joint effort with Susanna suggesting ideas all the time which was great as many people just wait for instructions. We just made it up as we went along. There’s stuff you notice with slow-mo that you wouldn’t otherwise, and subtleties that are emphasised to an incredible degree, even so much as a glance or a twirl of some fabric. I also like the android-like movement of Susanna which the slow-motion effect gave us. She doesn’t move like that in real life 🙂

Editing this footage saw Premiere crash approximately 90 times. I’m not sure what was going on there but it didn’t like the Nikon V1 slow-mo footage! The footage is conformed to 30fps in-camera and you can play it back immediately on the LCD. Recording for just 5 seconds gives you about a minute of footage but the files are heavily compressed and of low res so don’t take up much card space at all. The battery on the V1 is massive for a mirrorless camera, it has a larger capacity than even the 5D Mark III’s battery. It is certainly the largest consumer stills camera battery I’ve ever used at 1900mAh. Quite an achievement considering the tiny size of the V1 itself and wonderful to be able to shoot for hours without changing the battery.

Compared to flagship Micro Four Thirds and Sony NEX cameras the Nikon V1 may look a bit underpowered on paper – small sensor, low megapixel count yadayadayada – but I’m really warming to it, the tiny size, the long battery life, the great EVF and the images it takes. It’s also a very speedy camera. Auto-focus is very fast, MUCH faster than Canon’s mirrorless.The video record button is responsive and the slow-mo clips are written instantly to the card, no need to wait for them to buffer like on the Sony FS100 and $8000 FS700! Once you’ve finished recording one you can immediately start recording the next.

Something which you can’t avoid at such high frame rates is a flickering effect on some electric light sources but again I felt it added atmosphere here. I liked that the image quivered slightly, along with the beat of the music. Not always desirable though, so something to bear in mind when choosing which lights to use. To light the video we used one 100w practical light (with a red filter) which I found at a Berlin flea market and the new Switronix Bolt LED light with variable temperature control which I am reviewing soon.